The XTS is now the carmaker’s largest and most technologically advanced sedan, also serving as its flagship. With features like a vibrating seat alert (which senses an unexpected lane departure and alerts the driver of an imminent collision), Magnetic Ride Control, and world-class Brembo brakes for added stopping power, the XTS is not only a stunning vehicle, but a safe one. Rear passenger comfort was also given priority with 40 inches of leg room and soft leather (and heated) seats, in addition to a trunk that fits several full-size suitcases or even golf clubs with ease. (Read the full CD staff review of the XTS on page 56.)

Cadillac knows it has a winner and has reaffirmed its support of the chauffeured ground transportation industry. Via the Cadillac Professional Vehicle Team, it has stepped up its industry presence by strengthening and expanding its network of nationwide professional dealers that sell and service the XTS and Escalade. Cadillac completed a geographic analysis and determined areas where additional professional vehicle dealers were needed. At last count, the network was up to 19 dealers nationwide, and growing.

Fort Worth, Texas-based Frank Kent Cadillac is one of the newest additions to the network, representing all of North Texas and much of the Southwest. Frank Kent, which has been selling Cadillac vehicles since 1953, recently debuted its brand-new facility with expanded service bays and a stunning new showroom in October 2012, right around the time it was approached by Cadillac to join the professional vehicle network. Owner Will Churchill saw the opportunity and didn’t hesitate to take on the challenge.

“I think there’s a large market there,” he says of livery fleet sales. “We’re very excited about becoming a professional vehicle dealer and making those new connections [with operators]. We’ve gotten everything we’ve asked for from Cadillac, and I’ve been very impressed with Angela [Jurson] and the entire Professional Vehicle Team. I’ve leaned on them quite a bit as we’ve moved through the process and they’ve been more than helpful. I’ve received more support than ever anticipated.” 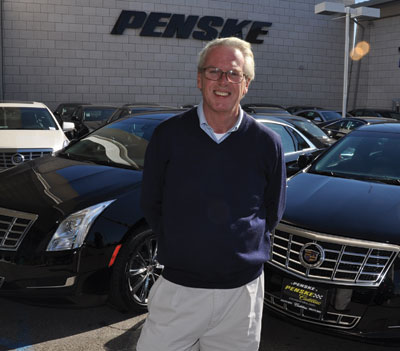 Phillip Hartz of SoCal Penske In addition to Churchill, fleet sales will be managed by Chris Jones, professional vehicle sales, and Roger Fenn, general sales manager. Jones, who is a seasoned salesman and has years of fleet experience, says he looks forward to meeting and developing relationships in the industry. “I’m working with a great organization and Will [Churchill] is very ambitious. The XTS is an excellent product for the industry.”

Also a newer member of the network is Acton Fleet Sales/SoCal Penske Professional Vehicles with locations on both coasts—in Acton, Mass., and Torrance, Calif. Spearheaded by Acton’s General Manager of Fleet Sales Bill Cunningham and SoCal Penske Managing Partner Phillip Hartz, operators have access to hundreds of vehicles. Greg Maddock, who was the former fleet sales manager for Lockhart Cadillac in Indiana, is also part of the SoCal team as its West Coast sales director. Among them, the team has dozens of years of combined experience and an intimate knowledge of the industry. 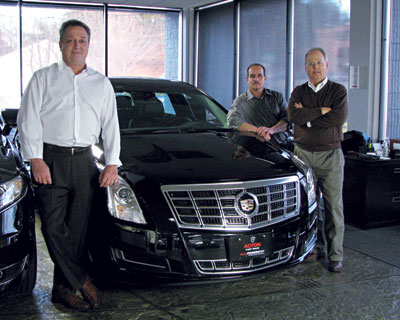 Cadillac’s strategy also includes lending support to its new and established dealers. Since last fall, a member of the Professional Vehicle Team has been visiting each in its network and offering intensive, one-on-one training with staff such as service technicians and fleet salespeople. The team will also communicate regularly with dealers and follow up at least once a quarter so that all are in tune with the needs of the industry. Service manuals and market reports and updates will consistently be shared with dealers to ensure a seamless customer experience at any dealership. It also provides marketing assistance and materials for better communication with customers. 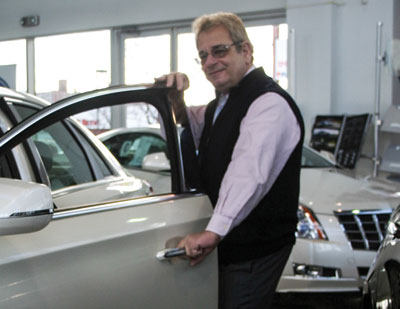 Rick Eichner of City Cadillac On the East Coast, Rick Eichner, general sales and marketing manager for City Cadillac in Long Island City, N.Y., notes that sales of the XTS are brisk. “Without exception, every company that I have sold XTS vehicles to since it came out in July 2012 has been back for additional product,” he says. “What makes me confident is that a lot of these operators had been Lincoln-only customers, or hadn’t used Cadillac vehicles in over a decade. The XTS is comfortable, has intuitive technology, a modern look, and a very competitive price.”

City Cadillac has specialized in the for-hire industries, including limousines, black cars, and funeral vehicles, for the past 19 years and is one of the largest dealers in the network. Its location—in the heart of the NYC black car market—services operators from New York, New Jersey, and Connecticut. Eichner says that one of the best reasons for purchasing from a local dealer is the hands-on training that an operator receives so that he is knowledgeable and ready to put the vehicle on the road.

“Many of my customers have been impressed but at first intimidated by CUE and the fact that it’s a new vehicle,” he says. “But after a test drive and the additional training that we offer, those trepidations disappear. We train customers for a minimum of an hour before leaving the dealership—until they are comfortable and understand everything that the vehicle has to offer—so that when they hit the road, they are ready to work.”

A-1 Limousine in Princeton, N.J., a lifelong Cadillac customer, added 24 silver (its signature color) XTS sedans to its fleet back in September. Jeff Shanker, executive vice president, had an opportunity to drive the car firsthand before making the purchase, but knew quickly that this was the car for his fleet. 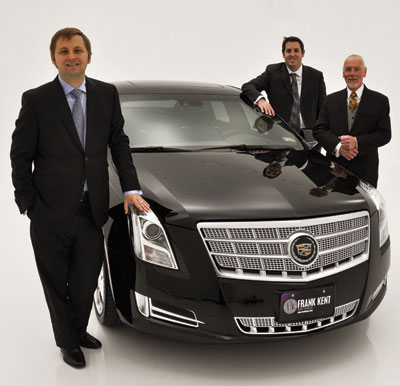 Frank Kent Cadillac (Will Churchill, Roger Fenn, Chris Jones) “Since I first saw the car I was intrigued with its sporty, stylish look of luxury. The car is simply a pleasure to drive. The driver’s seat wraps you in comfort and all of the controls are at your fingertips. The CUE system is easy to operate and thoroughly enhances the driver and customer experience,” he says. “The suspension holds the road and provides a ride which is sporty and responsive to the touch while providing a luxurious feel. I was a little concerned about the roominess of the ‘money seat’ at first, but our customers have come to us with accolades, and they are very pleased with the selection of our new livery sedan. We are happy that Cadillac has provided a true luxury livery vehicle for the industry.”

Shanker reports that customers and chauffeurs alike have praised the styling and comfort of the XTS. He frequently gets comments from passengers about the standard rear sunshade and the seat warmers, especially on chilly Northeast mornings, and chauffeurs are impressed with the handling, smooth ride, and GPS functions. Because the XTS is a new vehicle, A-1 conducts a thorough training session for chauffeurs on how to use CUE to avoid confusion and to maximize functionality. Bluetooth connectivity also means that chauffeurs can stay in touch while still being behind the wheel.

Elliott Eichenholz, New England fleet account executive for GM, notes that many operators in the area have expressed an interest to him in the XTS and are ready to switch. “Everyone loaded up on Lincolns right before the Town Car went away because they were nervous about what others would do, but now they are ready to make purchasing decisions. The W20 livery XTS has more than enough room. It meets the needs of customers, has a great price point, and fills that void. I think the XTS will be [the industry’s] livery sedan just like the Town Car was.”

Eichenholz notes that BostonCoach, with whom he has worked for over 9 years, and some of its affiliates have already made the move, and are ready for a second wave of purchases to replace their aging DTS fleets. He also works with companies like Rudy’s Executive Transportation in Cos Cob, Conn., which has been running 45 XTSs since August with no reported problems—some vehicles already clocking over 50,000 trouble-free miles. Carey International and EmpireCLS are also reported to be in the works to add the XTS to their fleets. 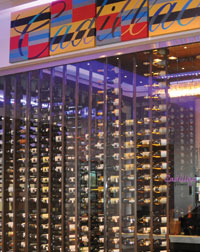 Frank Kent Cadillac, which also features a cafe and a dog park for customers, sells fine wines in its Cadillac Wine Store Acton/SoCal Penske is taking the XTS to a whole new level as the exclusive dealer of the XTS-L, which was unveiled this month in Las Vegas. The XTS-L gives passengers an additional 7 inches of leg room, just enough for some extra comfort. The team worked with Cadillac Master Coachbuilder Specialty Vehicle Group (SVG) to produce an FMVSS-certified vehicle that can be serviced by any Cadillac dealer. According to Cunningham, it’s another option for operators.

“After many months of listening to customers, we know what the industry wants and is looking for now—leg room,” he says. “SVG is one of the best Cadillac Master Coachbuilders (CMC) in the world, and we relied on them to tell us what a reliable conversion would be for the customer. The XTS-L fills that need. It was about keeping the weight minimal and the design simple. What they’ve produced is a well-designed, worry-free, safe vehicle with a reasonable price point. We were very price sensitive so that it could be a vehicle that any operator could afford.”

Will Churchill of Frank Kent Cadillac also reports that he has been in talks with other CMCs to produce a similar aftermarket extended version of the XTS. Other CMCs are already producing and selling hearse and stretched versions of the XTS, so the vehicle is versatile for a variety of niches.

Cadillac, a longtime supporter of the chauffeured ground transportation industry, is consistently proving that the XTS can become the new black car standard. That’s already happening across the country as livery operators embrace the XTS as their quintessential sedan. With an ever-growing number of professional vehicle dealers across the country, operators can be assured that they will not only be adding a stunning and technology-rich vehicle to their fleets, but will do so with the full support and resources of Cadillac for a smooth transition every step of the way. [CD02/13]