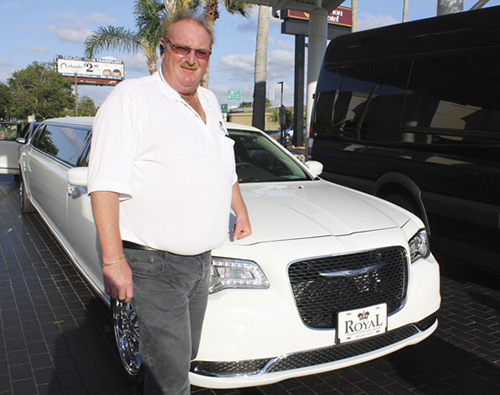 GOLA President Cliff Wright of Royal Coach and Limousine Orlando, Fla. — The Greater Orlando Limousine Association (GOLA) has been hard at work both for its association members and the community it serves.

President Cliff Wright of Royal Coach and Limousine has been refocusing the meetings on education, networking, and updates about local issues to ensure that Orlando-area operators are keyed into regional concerns while still looking inward to strengthen their companies.

“We’re helping them train their staff and employees to be better than TNCs,” he said. “Having the right vehicles is one thing; it’s the owner’s responsibility to make sure their chauffeurs are professional, on time, look good, and go above and beyond to do their jobs. We try to bring education to every meeting, especially whenever there’s local issues. We have a strong vendor base, which helps when people want to talk about what vehicles are doing well.”

The regional concerns that top GOLA’s list are TNCs’ preferential treatment at the airports and even tourist destinations like Disney Springs, while broader industry concerns include “the skyrocketing cost of insurance.” The association has poured thousands of dollars into fighting TNCs directly, and is now looking to unify with statewide operators to find strength in numbers. Wright says that GOLA has a “good partnership with Rick [Versace] and the Florida Limousine Association,” and the two are exploring a reciprocal membership package.

But it’s not just about business: In the wake of the deadly Hurricane Michael that pummeled the region last month, the association and its immediate past president Isaac Hernandez of Access Transportation of Orlando rallied members to help those still suffering in the aftermath of the third-deadliest hurricane to make landfall in the continental United States.

The “care caravan” comprised a number of vehicles coordinated by Hernandez’s church group, including a Mercedes-Benz Sprinter that GOLA members filled with donations like water, food, and diapers.

“Isaac is one of the most generous guys out there, and he and his son spent a couple days at the donation site,” Wright said. “GOLA sent them with a Sprinter full of requested items. Our members, especially people like Al [Castagna of Quick Transportation] and Marlene [Levin of Sweetwater Limousine], always rise to the occasion.”

GOLA typically convenes on the second Tuesday of the month at 6 p.m. but its next meeting will be November 15, when board nominations will be voted on.