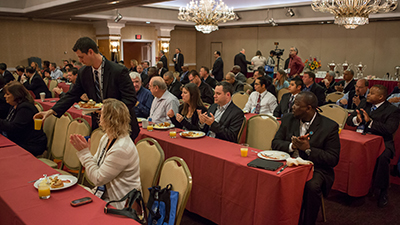 MLOA President Maurice Brewster of Mosaic Global Transportation began the meeting by emphasizing the importance of networking. “There’s huge value in getting to know the guy who’s sitting to the left of you or the woman sitting to the right of you,” he said. “We are all CEOs, we are all decision-makers, we can make a decision on who we do business with. The beauty of these shows is to be able to network.”

Brewster also reaffirmed the MLOA’s 2015 goal of making membership within the association a substantive endeavor from a monetary and contract perspective. “That idea came from you: Last year, you were absolutely clear that you wanted help in getting contracts and in getting certified,” he told those in attendance.

To better meet those and members’ other needs, the MLOA had hired Dr. Yvonne LaMar as its executive director earlier in the year. LaMar discussed the possibilities for small businesses landing private-industry contracts and how she’s available to help guide members through the certification process, which can take up to 90 days but comes with “tremendous benefits.” 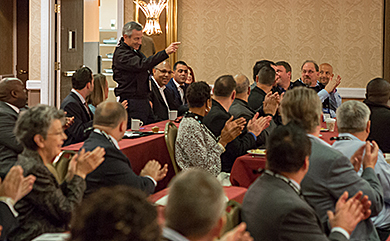 The Chauffeur Driven Show’s Keynote Speaker Jim Donald, CEO of Extended Stay America, made a guest appearance at the Minority Limousine Operators of America’s meeting. After a question-and-answer session with the MLOA board members came a panel with representatives from companies who, according to Brewster, have “given their time and their talents to help you help yourselves”: Bill Battisti from Battisti Customs, Jeff Brodsly from Chosen Payments, Michael Kaplan from Advantage Funding, and Arthur Messina from Create-A-Card. Those in attendance were invited to ask the panelists questions, most of which pertained to small businesses’ images, growth, legal obligations, and benefits.

Brewster closed out the meeting by announcing that the MLOA will begin looking for new board members and committee members, and that anyone interested in getting involved is encouraged to do so. 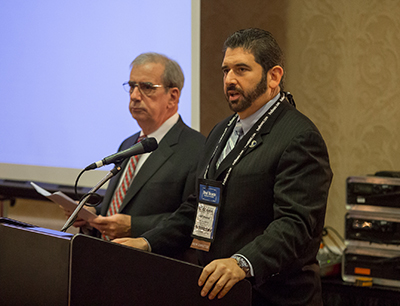 LANJ President James Moseley of Trip Tracker and Vice President/Legislative Chair Jeff Shanker of A-1 Limousine discussed new association business. Shanker spoke of how 11 insurance-related bills, including LANJ’s Assembly Bill 3401, are awaiting a tentatively scheduled December 8 hearing. He also summarized the October 17 Insurance Council of New Jersey meeting that lobbyist Barry Lefkowitz spoke at in regard to TNCs on both a statewide and national scale, especially in terms of how well covered—if at all—New Jersey drivers are if they use personal vehicles for TNCs’ commercial purposes.

Randy O’Neill of Lancer Insurance Company and Michael Marroccoli of The Capacity Group were also on hand to discuss the insurance aspect of the industry. O’Neill provided an update on chauffeured transportation operators’ insurance and regulatory issues, while Marroccoli covered cyber liabilities via his presentation, “Small Business: A Hacker’s Perfect Target,” which explored the many ways that small businesses are vulnerable to cyber-attacks and physical theft alike that could compromise their confidential information. 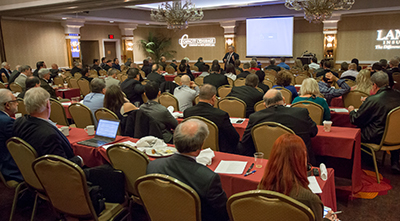 The Limousine Association of New Jersey’s breakfast meeting at the Chauffeur Driven Show hosted a packed room. The meeting’s keynote speaker was Christopher Rotondo of the Department of Transportation’s Federal Motor Carrier Safety Administration, who broached the TNC issue by stressing to all in attendance that there is “nothing as powerful as a group working together.” He then spent the bulk of his speech addressing transportation safety concerns, especially within the for-hire industry: “Passenger transportation is one of the safest industries but when it goes bad, it goes bad in a big way.” He cited statistics that estimate 92 people die on the roads every day, 11 of which will be because of a bus or truck.

Rotondo went on to cite fatality numbers in transportation, saying that “When one plane crashes, all hell breaks loose; 92 people die on the roads every day and no one says anything until it’s personal.” He urged operators to follow safety regulations and guidelines, telling the packed room that it’s his job to “always preach safety” and offering his assistance to help everyone adhere to the rules that aim to keep everyone safe on the roads.

The next LANJ meeting is scheduled for January 21.

The yearly event will include poker, blackjack, and roulette, as well as both live and silent auctions and a 50-inch flat screen TV for the tournament winner. A $100 player ticket gets you $2,500 worth of chips, food, and two drink tickets; re-buys, add-ons, and party tickets are also available for $25 each; and table sponsorships are $225, which gets your name on a table, recognition during the event, and promotional items in the swag bags. Parties can also buy nine-person tables at $1,250, which include a buy-in and re-buy for each player and a table-sponsor package.

The poker tournament, which began as a way to raise money for the GCLA four years ago, has consistently grown annually and is now one of the association’s largest fundraisers, according to Program Chair Kevin Illingworth of Classique Worldwide.

“It’s getting better every year,” Illingworth said. “We started off with about 68 people the first time, now we have seats for 100.”

If you want to attend but don’t want to play poker, there will be plenty of ways to meet with affiliates and friends during the event. Anyone interested in signing up for the GCLA’s evening of networking, fundraising, and good company has until Friday, November 14 to do so.