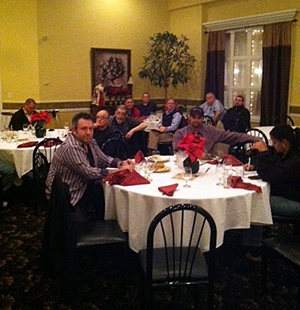 Dave Bastian of Towne Livery, who’s also LBTOUNY’s legislative chairman, had been invited by association President Kevin Barwell of Giorgio’s Limousine Service to discuss much of the issues covered during the meeting. Those key issues included the association’s efforts to expand its membership base to more areas in New York state, the continued encroachment of TNCs, and what LBTOUNY is doing to repeal the state’s sales tax on black car and limousine services.

The sales tax has had an unwelcome effect on New York state operators since its introduction, and members have spent more than a year fighting it, only to find themselves back at the beginning.

“We’ve had two bills that went through the House, the Assembly, and the Senate,” Barwell said. “It did pass so the bill was repealed in the Senate but, unfortunately, the Assembly did not get it to that point, so we’re going to start again in the new year. The fight is continuing.” Barwell also said that association members have discussed their options for getting the sales tax repealed and “trying to get it into the budget.”

TNCs were a hotly discussed topic at the meeting, too. While they’re allowed to operate in New York City, they’re still not permitted upstate until they follow the same laws as regulated livery operators.

“The TNCs were in Buffalo and Rochester before they were ever in New York City, so we started on getting them removed from this area, or at least making sure they follow the same rules and regulations that other companies supplying transportation services in the state of New York have to follow,” Barwell said. “TNCs can operate in New York City if they follow the rules, but they’re not allowed in the upstate area. So that was great, but we know that they’re still trying to get into our area.”

Barwell also said that it’s come to the association’s attention that drivers who worked for Uber or Lyft before they were removed from the upstate area have found a loophole to continue operating.

“We’ve found out that some drivers who were working here before, especially in the Rochester area, have created somewhat of an underground network,” he said. “They’re providing transportation through some of the customers they had, only without Lyft or Uber taking their money. We have to deal with that issue now, too.”

The association is looking ahead to spring, as it’s planning its first Day on the Hill for May. Having represented LBTOUNY at other organization’s legislative days, Barwell feels that it’s time for operators in New York state to unify in Albany.

“We’re inviting not only our members but also all the other associations to be a part of this so that we can get through to the representatives about the issues we’re all fighting,” he said. “Hopefully, it’ll be a good event and something we can continue in the future for all operators in the state of New York. I think we, as an industry, need to have a little bit louder of a voice upstate.”

LBTOUNY’s schedule for 2015 has been finalized, and Barwell is pleased that its meetings will be throughout Upstate New York in the coming year.

“We really want operators to understand that this is their New York state association—not only upstate, but the whole state can be a part of it,” he said. “The more people we have, the louder our voice will be.”

The next LBTOUNY meeting will be February 18 in Rochester. 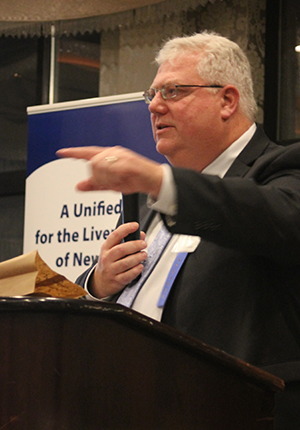 Newly installed TLPA President Mike Fogarty of Tristar Worldwide spoke at the recent NELA meeting. Dorchester, Mass. — A nasty nor’easter may have caused delays and disruptions throughout the day, but the New England Livery Association’s (NELA) quarterly meeting and holiday party went on without a hitch December 9. The half-business/half-pleasure shindig brought industry discussions, lively entertainment, and holiday cheer to Venezia Waterfront, which lies just outside Boston.

The event, which did see a delayed beginning to accommodate members’ increased travel time, began with an educational seminar about subrogation and loss recovery with representatives from Lancer Insurance, who offered advice on how to handle the aftermath of a fleet vehicle’s accident. NELA Treasurer Teale Smith of Maine Limousine Service also spoke before the session’s Q&A period with association members. 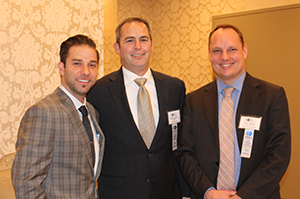 L to R: Jeff Brodsly of Chosen Payments, NELA President Michael Callahan of Able Limousine, and NELA 2nd Vice President David Lathbury of Black Tie LimousineDrinks, dinner, conversation, and entertainment then followed. Chauffeur Driven sponsored the event’s entertainment, which included mentalist/magician Dave Hall, who delighted association members by going from table to table during the evening’s cocktail hour and again with his dinnertime performance. There were also a number of prizes and gift baskets donated to the association for its members to win: Chauffeur Driven’s editor Madeleine Maccar raffled off a pass to CD’s 2015 Show in Miami Beach, which was won by Tina Benson of L.A. Limousine Service. 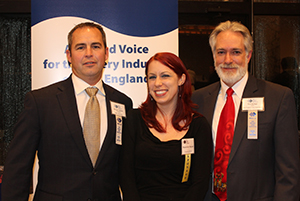 NELA President Michael Callahan of Able Limousine (left), Chauffeur Driven Editor Madeleine Maccar, and NELA CEO Rick SzilagyiThe association also hosted a few guest speakers before the evening was over. Mike Fogarty of Tristar Worldwide and the new Taxicab, Limousine & Paratransit Association (TLPA) president spoke about how the TLPA is working with the livery industry in its ongoing battle against Uber, emphasizing that “this is the fight of our lives” and that everyone in the regulated ground transportation industry “are in this fight together.” NELA CEO Rick Szilagyi then discussed association developments, such as how the board decided to focus on offering more educational opportunities in the upcoming year through webinars and podcasts.

NELA’s next quarterly meeting will be March 10.

Chosen Payments Gives Money Back to the Industry 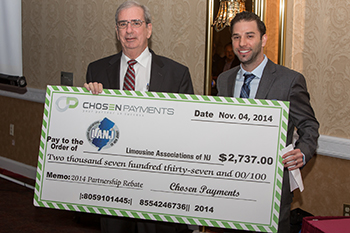 Moorpark, Calif. — A few years ago, Chosen Payments, a leading credit card processor for the ground transportation industry, made a commitment to the industry’s regional and national associations to contribute to them financially. At the most recent Chauffer Driven Show, Chosen Payments presented human-size checks to three associations.

With the mutually beneficial relationships between Chosen Payments and many associations, the payment processor intends to continue this trend each year. “It feels good to support those who support us, which is the beauty in creating true relationships in this industry and with our clients,” says CEO Jeff Brodsly. “We are grateful for the overwhelming support from the industry and the various associations we are partnered with. We will continue to help in all ways we can.”