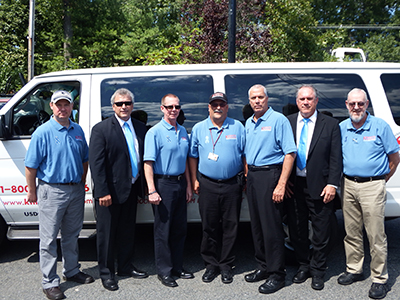 Shrewsbury, Mass. — Knight’s Airport Limousine Service has partnered with the American Cancer Society on a campaign to promote prostate cancer awareness and raise funds toward researching the disease. Throughout the month of September, Knight’s Airport Limousine Service van drivers will swap their trademark red polo shirts for blue, while town car and limo drivers will don blue ties. Blue is the color most commonly associated with prostate cancer awareness.

“We are pleased to help promote prostate cancer awareness,” says Denise Kapulka, sales manager at Knight’s. “Cancer has affected many of our drivers, families, and friends. Any part we can take to promote awareness and early detection could make a positive impact toward changing lives for the better.”

The Hogan family, who owns the business, is hopeful that the wardrobe change will spark conversation between repeat passengers and new customers and drivers, and added drivers will have on board brochures with information on prostate cancer.

According to the American Cancer Society’s “Cancer Facts and Figures 2014,” more than 5,000 Massachusetts men will be diagnosed with prostate cancer this year, and more than 600 men in the state will die from the disease.

“This is a truly unique grassroots awareness campaign, and we’re proud to partner with a local business that has always been committed to serving the community,” says Patti McKone, a Worcester resident and senior community engagement representative with the American Cancer Society. “If the uniform change is able to start some conversations between Knight’s predominately male staff of drivers and passengers and just one man is encouraged to have an exam that turns out to be lifesaving, it’s an overwhelming success.”

The American Cancer Society (ACS) recommends that men have a chance to make an informed decision with their health care provider about whether to be screened for prostate cancer. The decision should be made after getting information about the uncertainties, risks, and potential benefits of prostate cancer screening. Men should not be screened unless they have received this information.