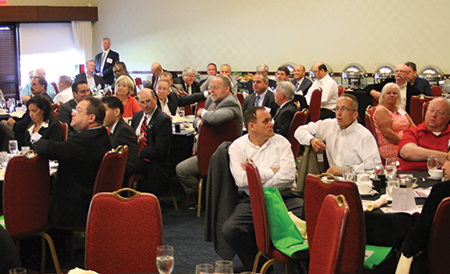 Princeton, N.J. — The Limousine Association of New Jersey (LANJ) hosted a packed house at its most recent meeting on September 17 at the Princeton Marriott. Chauffeur Driven Publisher Chris Weiss and Editor Madeleine Maccar attended the meeting, where Weiss also spoke about both the industry and the upcoming Chauffeur Driven Show in Atlantic City this November 2-5.

After the open board meeting, the member meeting kicked off with a luncheon before the association’s president James Moseley of TripTracker welcomed all in attendance and recognized those who have joined LANJ in 2014. 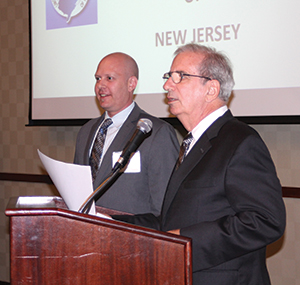 Chauffeur Driven President and Publisher Chris Weiss (left) and LANJ President James Moseley of TripTrackerMoseley, along with the association’s Immediate Past President Tim Rose of Flyte Tyme Worldwide Transportation and First Vice President/Legislative Committee Chair Jeff Shanker of A-1 Limousine, also discussed what the association is doing to benefit its membership base, which includes the brand-new LANJ Line, scheduled to launch in early October. The service will connect all of its members via text messages and email to both facilitate everyday business transactions and quickly resolve emergency scenarios.

A number of vendors and sponsors also spoke during the meeting, including Brian O’Neill of Wolfington Body Company (based in NJ), Sandi Burgess of RightResponse, and Tim Thompson of Cadillac. The meeting was also a stop on the American Motor Products road show, which highlights the many discounted services and products it makes available to the livery industry.

The next LANJ meeting will be held at the Chauffeur Driven Show on November 4.