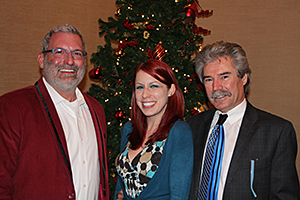 Chauffeur Driven editor Madeleine Maccar attended the festive event, which included plenty of time for local operators to enjoy each other’s company as well as a buffet dinner, an auction and raffle, entertainment offered by a fan dancer and a magician, and a handful of casino games for those who wanted to try their luck. 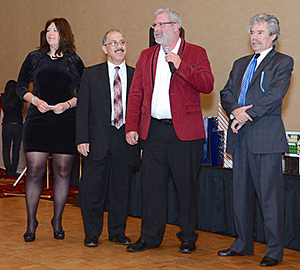 Mary Vaught of Vaught Insurance (left), Wes Hart of American Corporate Transportation, Ismael Abed of LaBresse Limousines, and Erich Reindl of Avanti Transportation Outgoing HALCA President Erich Reindl of Avanti Transportation assumed the roles of both emcee and auctioneer, first introducing the night’s speakers and expressing his own gratitude to the association and its many supporters, and later raffling off the numerous donated items available to be won, which included four show passes to the Chauffeur Driven 2015 Show in Miami, two of which were accompanied by round-trip airline tickets.

Reindl introduced HALCA’s three new board members, who will be assuming their roles in January: Lauren Barrash of The Wave; Kevin Claypool of Atlas Limousines; and Rony Dieudonne of Global Transportation. Reindl, along with Richard Mishriky of CTI Transportation and Mary Vaught of Vaught Insurance, will be stepping down from the board. Current board member Wes Hart of American Corporate Transportation will be HALCA’s president in 2015.

“It was time to let a smaller operator run the show,” said Reindl, who has served as HALCA’s president for three years. “We don’t want to foster the feeling that it’s the operators of bigger companies who always get to have a say about everything.”

HALCA’s next membership meeting will be January 21.