Aside from the complicated and labor-intensive paperwork that accompanies the new requirement, Hart and many other HALCA members are concerned that divulging proprietary information such as the number of pickups and drop-offs in a ZIP code or at an airport could compromise livery companies’ livelihoods—especially those of smaller operators—to the benefit of TNCs.

“If anyone goes to the city with a Freedom of Information request, they can get our information,” he said. “Any ‘technology company’ out there could just create this bubble map of how much revenue is in an area, so we’d be losing all of our marketing and competitive data. A lot of people don’t realize what an impact this has.”

While Hart reports that Houston is threatening to revoke operators’ permits if they don’t supply their revenue information, he added that “the city has allowed us to sign a waiver so we don’t have to report that information for one year.” 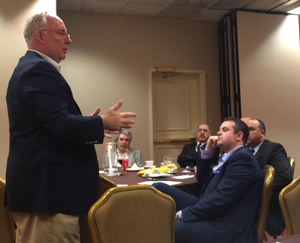 One of HALCA’s primary goals for the year is to fight the reporting requirement. Members are currently engaged in a letter-writing campaign to bring the issue to city council’s awareness, and Hart said that HALCA’s legislative committee is planning a “boots on the ground” meeting with Houston’s elected officials.

“I’m optimistic that, when they realize what they’re doing, they’ll modify the ordinance to make it not so restrictive,” said Hart, though he ventured that the difficulty of the battle ahead will be determined by the impetus of the regulation in the first place.

The second issue that commanded the meeting’s agenda was also born of last year’s modifications to Houston’s for-hire vehicle ordinance, as it created the city’s Transportation Accessibility Task Force, which includes HALCA member David Dillon of Carey Houston. The task force has mandated that 2 percent of each fleet’s vehicles be wheelchair accessible.

“The big issue is that a small operator would be spending $60,000 on an accessible vehicle,” Hart said. “As a small operator, I’d be spending that kind of money when I’ve only had one request for a wheelchair-accessible vehicle in my 10-year history.” Hart added that the average livery staff isn’t trained to assist a disabled individual in getting from a wheelchair to a vehicle, which presents a liability issue.

Additional issues that HALCA will address in the future include Uber’s arrival in Austin and fighting a pickup/drop-off fee that the Galveston cruise terminal has had on the books for years but never enforced until recently—a charge that Hart believes is in violation of The RIDE Act, as it introduces a cost to livery operators without offering them benefits not made available to the non-commercial public.