After CLA dispensed with monetary issues pertaining to an NLA refund check and a sponsorship donation from local dealership Sill-TerHar Motors, Denver International Airport (DEN) representative Mike Percy spoke about the airport’s new construction projects, as well as commercial parking’s staging areas. The completed project allowed for the addition of a second lane and new spaces. Dwell time had originally been reduced from 15 minutes to 10, but a request from CLA’s advisory board had the original period reinstated.

TNCs’ airport privileges were also up for discussion, especially regarding how they differ from those extended to traditional commercial vehicles; for example, TNCs and their drivers are not allowed any dwell time and must be registered with DEN. The airport has already begun issuing fines to those who fail to recognize regulations, as well as holding meetings with TNC representatives to make them aware of the consequences accompanying a failure to follow the rules, such as additional fines and vehicle impoundment. 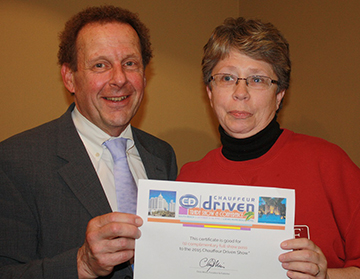 Philip Jagiela (left) and Dianne Cavender of DDG Classic Limousines, who won a pass to Chauffeur Driven’s Miami show The association also addressed its search for a new executive director at the meeting, and later hired Jagiela for the position.

“We are excited to have Philip on board,” said CLA President Shane Stickel of Presidential Limousine. “His industry and association experience will give us the advantage of having a professional manager running our organization. With the challenges our industry is facing with unregulated app technology, our board will have more time to focus on these rather than the day-to-day running of our association.”

Jagiela raffled off a pass to Chauffeur Driven’s Miami show, which was won by Dianne Cavender of DDG Classic Limousines.

CLA’s next meeting is scheduled for June 16, and the association invites all members to send Secretary Nikko Ouzounis of White Dove Limousine any items they would like to see included in future meeting discussions.