Schiller Park, Ill. — The Illinois Limousine Association (ILA) held its annual spring meeting at the Comfort Suites O’Hare Airport on May 20, which saw a full day of updates and guest speakers, as well as the election of the association’s new board of directors. More than 75 people were on hand for the event, which ILA President Tracy Raimer of Your Private Limousine, ILA Secretary and Treasurer Paula DeBiasi, and the rest of the planning committee dedicated much of their time to making a successful one.

The newly elected ILA board of directors Chauffeur Driven Publisher Chris Weiss was present for the meeting. Chauffeur Driven was among the meeting’s roster of sponsors, which also included Nationwide Bus Sales, Battisti Customs, Turtle Top, Chosen Payments, The LMC Group, and Create-A-Card. Vendor and equipment displays were exhibited during the daylong event. 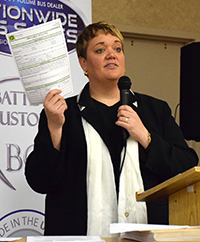 Kristen Carroll of The LMC Group spoke at the recent ILA meeting In addition to Kristen Carroll of The LMC Group, who discussed the operational considerations of hourly employees and independent contractors, and attorneys Carrie Hall and Brian Paul of Michael Best & Friedrich, who gave a presentation on the wage and hour issues affecting the transportation industry, much of the meeting comprised an array of guest speakers. The Olive-Harvey College provided an update on its Public Chauffeur Training Program; John Murphy of the Illinois Department of Transportation discussed the department’s audits; and Business Affairs and Consumer Protection Commissioner Maria Guerra Lapacek spoke about recent developments in the City of Chicago BACP.

The meeting also recognized Barb Simkus for the nearly three decades she spent as ILA’s secretary. While Simkus still works within the industry, she had retired from her position within the association this past winter.