NELA Shows Appreciation for Its Chauffeurs 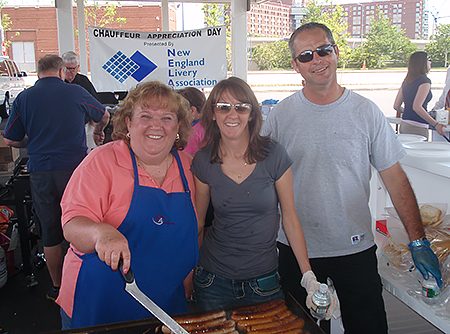 L to R: NELA 2nd Vice President Tina Benson of L.A. Limousine Service, NELA Director Lynda Saitta of Momentum Drive, and NELA President Mike Callahan of Able Limousine were among the board members helping out at the annual event. Boston — New England Livery Association (NELA) hosted its 15th annual Chauffeur Appreciation Day June 25 at Logan International Airport’s limo pool, where members representing the board and the association in general helped serve nearly 1,000 lunches to the hungry chauffeurs making runs to and from the airport all day. The yearly event’s Gold Sponsors included Allied Technologies and Dav El/BostonCoach, and a number of Silver and Bronze Sponsors contributed to the event’s success, too.

NELA CEO Rick Szilagyi said the daylong event is a chance to give back to the chauffeurs at the frontline of members’ companies. NELA’s 2nd Vice President Tina Benson of L.A. Limousine Service, as well as her industry-supporting siblings Cindy and Carl, “were all huge contributors of manpower”—Benson’s father, in fact, used to take on much of the day’s responsibilities in years past.

“Tina’s father used to work a canteen truck at fairs, so they would bring that truck to Chauffeur Appreciation Day,” Szilagyi said. “Now, she builds this wooden frame that serves as our storefront. Behind that, we have the two big grills that we just keep working all day.” 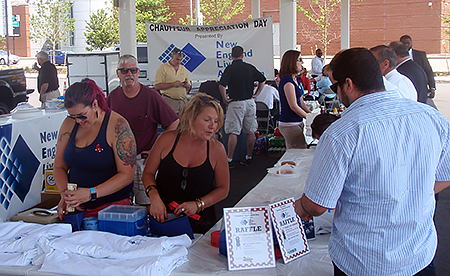 In addition to serving up nearly 1,000 meals, Chauffeur Appreciation Day also had raffles going on throughout the event. Much of the NELA board and a handful of the association’s members were jockeying to run the grills and serve up hot sausage, sweet sausage, hamburgers, and hot dogs to chauffeurs who traveled from as far away as Portland, Maine, to pick up and drop-off travelers hailing from all over New England.

As an extra thank-you to the chauffeurs who were able to stop by, raffles went on throughout the day. Sullivan Tire & Auto Repair donated more than 20 certificates for free oil changes, and Sunoco donated a pass to a NASCAR event. Everyone who bought a raffle ticket also received a T-shirt.

NELA’s next event is its annual George Colarullo Memorial Golf Tournament, which will be held August 18 at the Marlborough Country Club in Massachusetts and raise money for both CHIP’s House and One Mission this year.