MCTA Gears Up for Future Events 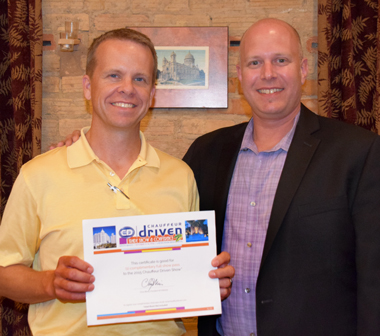 The evening function kicked off with a social hour before launching into dinner and the membership meeting, which was led by President Gina Brennan of Corporate Car and Coach. Brennan discussed how the industry will be affected by the number of major sporting events that Minneapolis will be hosting in coming years: the Ryder Cup in 2016; Super Bowl LII in 2018, which will be held at the opening-in-2016 Minnesota Stadium; and the 2019 NCAA Men's Division I Basketball championship.

Chauffeur Driven recently joined MCTA and donated to its PAC fund while Weiss was visiting with the association. He also spoke in an open-forum setting during the meeting, providing an overview of the current states of both the industry and the economy. As TNCs continue to be the biggest fight operators are facing, he offered up insights into the strategies employed by other markets around the country to combat the unfair competition the disruptive companies pose with their widespread lack of regulation.

The next MCTA meeting will be November 10.