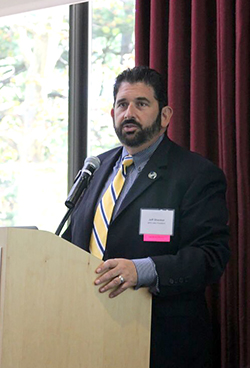 President Jeff Shanker of
A-1 Limousine Princeton, N.J. — On September 16, members of the Limousine Association of New Jersey (LANJ) met up to discuss industry developments and local legislation. Chauffeur Driven’s Publisher Chris Weiss and Editor Madeleine Maccar were both on hand for the association’s first event since its May auction.

President Jeff Shanker of A-1 Limousine opened up the meeting by announcing that Chris Stochholm of New Jersey Limo Finder is ready to start putting the LANJ logo on apparel and items to boost the group’s public recognition, build brand unity, and put some money back in the association’s coffers. As Stochholm had been acting as a one-man committee, Jennifer Wong of DriveProfit and Dan Sutich of Perfect Chauffeur both volunteered to help with the association’s marketing arm.

As state legislation was on recess for July and August, LANJ’s legislative committee saw a laidback summer—though members forged ahead with their grassroots effort both by walking the halls and speaking with the state’s elected officials on behalf of legally operating transportation companies. The association has been appealing to a number of senators and has managed to make some headway with a number of them by stressing TNCs’ ongoing insurance and safety issues. 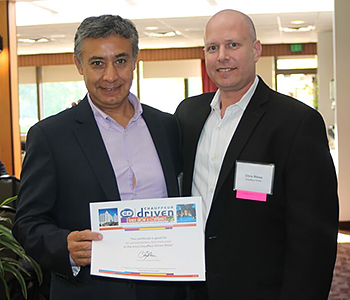 Oscar Garrido of Partners Transportation (left) and CD Publisher Chris Weiss Ambiguous wording in newly proposed regulations about sharing buses between companies and the sheer volume of paperwork involved has the association working to get the final rule overturned, as the “recordkeeping nightmare” it would create could be logistically prohibitive to loaning out buses.

In response to the many software options now available to operators, LANJ will hold a technology symposium September 30 at EmpireCLS’s headquarters. Dashride, Deem, GroundWidgets, GroundSpan, and Trip Tracker are among those who have agreed to present at the symposium.

New business included extending hearty kudos to the social media committee for generating “some pretty incredible page visit numbers” with regard to LANJ’s Facebook page. It was, however, agreed that the page should refocus on lauding LANJ members rather than relying too much on sharing negative press for TNCs.

Cadillac and Vehicle Tracking Solutions both sponsored the afternoon meeting, with Fleet Account Executive Mark Leddy speaking on behalf of the former company and Director of Business Development Adam Ross representing the latter. 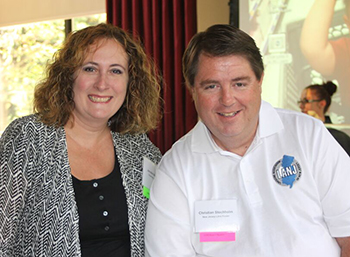 Jennifer Wong of DriveProfit and Chris Stochholm of New Jersey Limo Finder Craig Sante, intelligence analyst for the New Jersey Office of Homeland Security and Preparedness, delivered the meeting’s keynote address. Discussing the Suspicious Activity Reporting System (SARS), Sante emphasized that since LANJ members’ chauffeurs frequently visit airports and other potentially risky sites, they’re in a prime position to notice anything questionable or suspiciously out of the ordinary. His presentation touched on how terrorists can look like anyone, outlined the eight signs of terrorism, and how the exchange of information is crucial, echoing the “If you see something, say something” mantra familiar to any frequent Northeast Corridor traveler. Sante emphatically stated that information is useless unless it’s reported to the proper authorities, using SARS success stories as examples of Homeland Security in action.

Mike Marroccoli of The Capacity Group discussed the benefits of STOP, explaining that he has nothing to do with the program but promotes it out of concern for the industry in the face of “a dangerous insurance market where your livelihood is at stake,” thanks to the limited insurance options for chauffeured ground transportation. He spoke about how the program can be used as chauffeur training and be tailored to educate them about a certain region.

Toward the end of the meeting, Weiss spoke on behalf of Chauffeur Driven, highlighting its upcoming Miami show and thanking the many LANJ members in attendance who have contributed to the show as a committee member, mentor, or supporter. He also raffled off a show pass, which was won by Oscar Garrido of Partners Transportation.

The next LANJ meeting will be November 9.