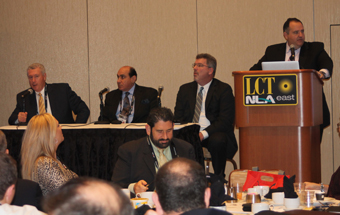 The meeting’s feature presentation was its panel “Insurance Need-to-Know for 216,” featuring (L to R) Mike Marroccoli of The Capacity Group, John Arone of HUB International, and Richard Ackerman of P.A. Post Agency, and was moderated by LANJ First Vice President Jason Sharenow of Broadway Elite Chauffeured Services Worldwide Atlantic City, N.J. — Members, prospective members, and industrywide supporters came out in droves to attend the November 9 breakfast meeting of the Limousine Association of New Jersey (LANJ) at Harrah’s Resort. Chauffeur Driven’s Industry & Brand Ambassador Philip Jagiela and Editor Madeleine Maccar were both in attendance for the meeting.

The association’s last general membership meeting of the year included The LANJ Report given by President Jeff Shanker of A-1 Limousine and a message from Randy O’Neill of meeting sponsor Lancer Insurance. It also saw the debut of LANJ Member Spotlights and an in-depth panel moderated by LANJ First Vice President Jason Sharenow of Broadway Elite Chauffeured Services Worldwide that featured insurance professionals Richard Ackerman of P.A. Post Agency, John Arone of HUB International, and Mike Marroccoli of The Capacity Group.

Shanker began by thanking members who have been especially active in “improving the image of the industry” by appealing to and visiting with elected officials. He specifically called out Immediate Past President Jim Moseley of Trip Tracker and Pete Corelli of Lakeview Custom Coach for their dedicated lobbying efforts but noted that support from within the association has helped LANJ make its case known. Recently, Evesham Township in southern New Jersey launched an anti-drunk driving campaign that called for a partnership with Uber; Shanker wrote an op-ed piece for the area’s two largest newspapers decrying the alliance and highlighting all the dangers of TNCs, which can be read at on.cpsj.com/1Huq1QZ. 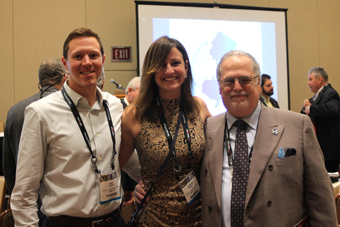 L to R: Matt Neuwirth and Siobhan Gerold of Vehicle Tracking Solutions and Bob Schiavo of Albert’s Transportation The recent statewide elections have ensured that New Jersey Democrats have control in “more commanding numbers”—which is good news for LANJ, as the party has been historically more reception to the association’s labor concerns and calls for better regulation of TNCs.

LANJ’s membership currently stands at 135, and its many committees are working to increase that membership even further, as well as continue to get the association’s name out through marketing and ensure that its social media outlets convey positive news about the industry rather than casting TNCs in a comparatively harsher light. The association also plans to launch an education committee in 2016 to provide added value for members.

The new LANJ Member Spotlights gave new operator and vendor members the opportunity to introduce both themselves and their companies. Representatives from 17 North Limos in Mahwah, N.J., Jack Williams Tire Company in Avoca, Pa., and technology-based marketing company SUBA Networks in South Orange, N.J. each gave brief presentations about their businesses. 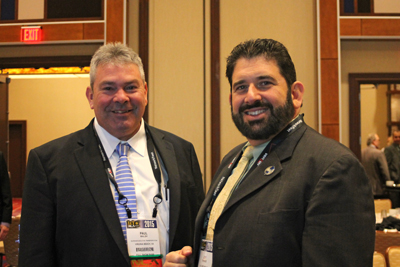 Virginia Limousine Association President Paul Walsh of Superior Executive Transportation and LANJ President Jeff Shanker of A-1 Limousine The insurance panel occupied the majority of the meeting, with Sharenow posing a variety of questions to the three-person panel and a few LANJ members asking their own questions, too. Answering queries about training programs, the differences between a hard and soft market, the value of adding onboard cameras, various policies that operators should start taking out to best adapt to changing times, where trends seem to be heading, DOT compliance as high-capacity vehicles become more popular, and the influence of TNCs on insurers led to not only thorough answers but also conversation exploring how different scenarios call for their own best practices, often drawing on previous real-life experiences.

At the end of the panel, Sharenow urged those with unanswered insurance questions to reach out to Ackerman, Arone, and Marroccoli: “These guys are rock stars,” he said. “Take advantage of that.”

The next LANJ member meeting is scheduled for Jan. 20.