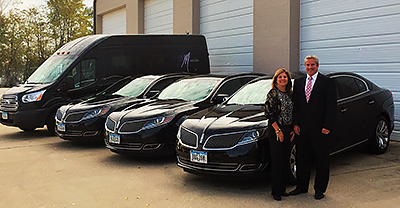 Melissa and Scott Woodruff with their new fleet additionsDes Moines, Iowa — Majestic Limo & Coach, Des Moines' largest chauffeured transportation company, is expanding its fleet in preparation of the Iowa Caucuses slated for February 1, 2016. The new fleet additions include the 2016 Lincoln MKS and a 2016 Ford Transit. Majestic is also adding a 2016 Chevrolet Suburban, anticipated to be in service by the end of the year.

With the Caucuses bringing an influx of delegates and visitors to the state, Majestic wanted to be prepared to meet the potential client demand. “This is the Super Bowl-level event for Des Moines,” said Scott Woodruff, owner of Majestic, “and Majestic is adding on to accommodate our political guests.”

Woodruff chose the Ford-Lincoln vehicles based on their visual appeal, wide range of features, and pedigree of reliability. “Ford has been a great name for our industry and has always provided us with reliable, solid products,” said Woodruff. “It was obvious that the Sprinter look was catching on in the chauffeured transportation arena, and when I heard Ford was bringing their European-styled van to the states, I was ecstatic.” He is similarly excited about the addition of the Suburban to the fleet. Majestic chose Des Moines-area dealers to supply the vehicles; the MKS and Transit were purchased from Stivers Lincoln Ford and the Suburban was acquired from Karl Chevrolet.

Founded in 1996, Majestic Limo & Coach started with a single Lincoln Town Car stretch limo. As the company approaches their 20th anniversary, they now have a 24-vehicle fleet that includes everything from sedans to full-size 56-passenger coaches.