Ford, NLA, and Windy City Limousine Team Up for Charity 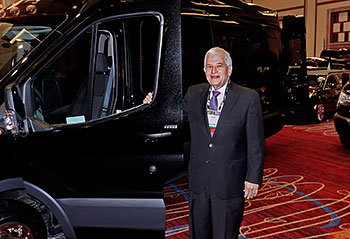 Even though he had the high bid of $45,000 at the LCT-NLA Show East auction on Nov. 9, Jacobs continued to raise his bid in $500 increments until he thought the price was right. When the gavel came down, he paid $48,000 to the NLA to benefit the Harold Berkman Memorial Fund, the limousine industry’s leading charity and philanthropic arm.

“My goal was to add another Transit to the Windy City Limousine fleet while also supporting the Howard Berkman Memorial Fund. I kept bidding because I didn’t think enough money had yet been raised,” Jacobs explains. “Everything I have in my life I got from the limousine industry, and when you get a chance to donate back to the same industry, you should do it. That’s how I feel.”

Ford donated the 15-passenger high-roof Transit wagon to NLA for the auction as part of the Ford Lincoln Limousine and Livery Vehicles’ annual support promotion for the association. Last year’s promotion raised $39,000 each for NLA and the Harold Berkman Memorial Fund.

The Fund is named after the late Harold Berkman, founder of Los Angeles-based Music Express, a past NLA president, and a founder of the professionally organized limousine industry. To date, the Charity Fund has contributed more than $750,000 to various charities, including When Georgia Smiled, Alliance for Lupus Research, American Cancer Society, City of Hope, CureSearch for Children’s Cancer, National Multiple Sclerosis Society, and Philabundance.

Jacobs bought the first Transit limousine built in the United States earlier this year and says he has been planning to add more Transit vans to the Windy City Limousine fleet ever since. Transit, America’s best-selling full-size van, is available in 58 configurations from the Kansas City factory.