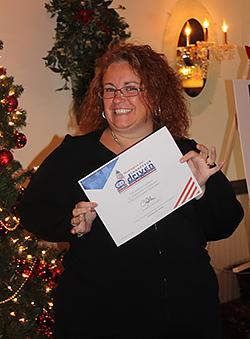 The holiday event welcomed association members, supporters, and industry operators alike. Chauffer Driven’s Editor Madeleine Maccar and Assistant Editor Rob Smentek were both in attendance for a night of fun, food, and games of chance. 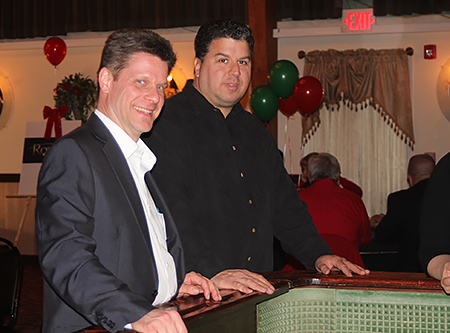 PRLA Treasurer Chris Haines of Michaels Classic Limousine (left) and PRLA Director Perry Camerlengo of Luxury LimousineUpon entering the hall, guests were given chips to try their luck at various game tables, including black jack, roulette, poker, and craps. For unlucky players and the folks who just wanted to increase their chances of winning big, the option to purchase more chips was available. At the end of the evening, any remaining chips were traded for raffle tickets, which gave attendees the chance to win various donated prizes, including housewares, toys, Kindles, Eagles tickets, and a flat-screen television. Also among the prizes was a pass to the 2016 Chauffeur Driven Show held in Washington, D.C., from October 9-12, which was won by Tracy Salinger Long of Unique Limousine.

PRLA President Steve Rhoads, who will continue his position in 2016, briefly spoke to the group, and thanked everyone for their work on behalf of the association throughout the year. Later, PRLA Director Anthony Onorata and Vendor Member Peter Corelli assisted Rhoads with the raffle and distributing prizes.

The next PRLA meeting will be held January 13 at Maggiano’s in King of Prussia, Pa.