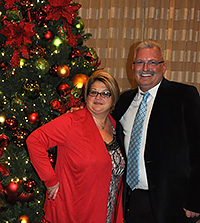 The festive evening offered attendees a buffet dinner as well as entertainment provided by a mariachi band and belly dancers. More seasonal fun was offered by a photo booth, sponsored by Past President Erich Rendl of Avanti Limousine, which allowed everyone to bring home a holiday photo. Additionally, various prizes were raffled off, including a case of wine, gift baskets, hotel accommodations, and local brewery tour packages. 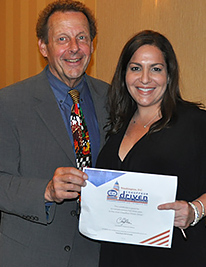 CD Industry & Brand Ambassador Philip Jagiela with Lauren Barrash of The Wave, who won a pass to Chauffeur Driven’s 2016 Show in Washington, D.C.The party gave the association an opportunity to present outgoing board members with a token of the association’s appreciation. Outgoing secretary Linda Pomerleau of Gulf Coast Limousine in Houston was thanked for her eight years of service while Frank Bergeron of Franklin Transportation was recognized for his four years as a board member.

Jagiela then addressed attendees and spoke about the successful 2015 Chauffeur Driven Show and Executive Retreat. Additionally, he emphasized the importance of operators joining their local and national associations and encouraged everyone in attendance not part of an association to get involved. Prior to hosting a trivia contest to give away two passes to Chauffeur Driven’s 2016 events, Jagiela acknowledged those who have been instrumental in HALCA’s success. The pass to the New Orleans Executive Retreat was won by Rachid Ben of Aviation Limousine & Transportation, and Lauren Barrash of The Wave took home the pass to the October CD Show in Washington, D.C.

To close the night, HALCA President Wes Hart of American Corporate Transportation offered his thanks to those who made the evening a success, including Jagiela and HALCA Vice President Ismail Abe of LaBrees Limousine. He then announced the association’s new board members: Matt Assolin of Nikko’s Worldwide Transportation, who will act as treasurer, and Jon Ouazdi of Transgate Limousine, who will serve on the board. Hart will remain president in 2016 alongside vice president Abe, and secretary Barrash.