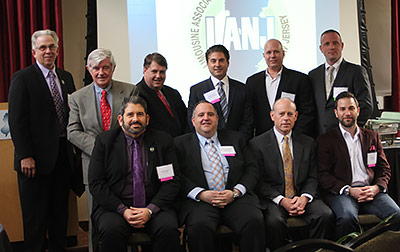 During a meeting that saw the continuation of LANJ Member Spotlights—a new initiative that gives the association’s newest members a chance to introduce both themselves and their companies—as well as updates on LANJ’s legislative progress and new CDL requirements, the 2016 LANJ Board of Directors was also announced:

While LANJ’s Immediate Past President Jim Moseley of Trip Tracker was originally nominated to the Board of Directors, his official retirement from the industry was announced prior to the official adoption of the new board. 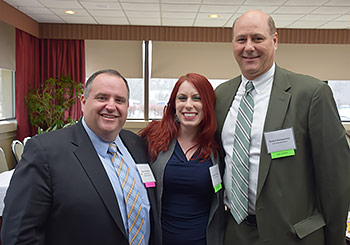 L to R: LANJ First Vice President Jason Sharenow of Broadway Elite Chauffeured Services Worldwide, CD Editor Madeleine Maccar, and Robert Bellagamba of Concorde Worldwide Shanker had much good news to share in his LANJ Report, recapping what the association has done for its members—now at a record 144 people, which earned resounding kudos for the Membership Committee on its “amazing job of getting the message out.”

Many of LANJ’s successes have been on the legislative side, as the past 12 months have seen more than 60 boots-on-the-ground meetings with legislators, regulators, and heads of not only state departments but also national ones. Educating consumers about safety has been the association’s key issue, though emphasizing the necessity of a level playing field has also helped members gain traction with elected officials. LANJ’s other committees were recognized for their contributions to the association, with initiatives and efforts from the Social Media, Marketing, Education, and newly formed Bylaw committees applauded for bringing added value to association membership.

Launched at the association’s November meeting, the LANJ Member Spotlights continued with the first meeting of the year: Scott Greenwald of AAA Worldwide Transportation, Charlie Featherstone of Acton SoCal Penske Professional Vehicles, and Keisha Richmond of America’s Prom Guide all took a few minutes to speak about themselves and their respective companies.

LANJ also presented the second installation of its Need-to-Know educational component, bringing in representatives from the New Jersey Motor Vehicle Commission to discuss the state’s new CDL requirements and testing.

Toward the end of the meeting, CD’s Chris Weiss spoke about the Chauffeur Driven brand, offering updates about the education and entertainment awaiting industry operators at the Executive Retreat, which will be held May 1-3 in New Orleans. He also raffled off a pass to the Washington, D.C. show, which was won by Michael Barreto of Flyte Tyme Worldwide.

The next LANJ meeting will be March 16.