GCLA Heads to Capital for Day on the Hill 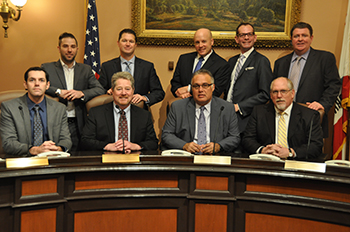 On February 9, the GCLA hosted an open planning meeting that included association information as well as lobbyist updates from Gregg Cook of Government Affairs Consulting. The GCLA reaffirmed that it does not believe the industry should adopt an across-the-board independent contractor model to remain in competition with TNCs. Those present discussed how high turnover at the California Public Utilities Commission (PUC), combined with being chronically understaffed, has inhibited consistency in enforcement; its new chairman has considered disbanding the organization entirely.

Day on the Hill proper began with a briefing the morning of February 10, which included presentations from guest speakers Deputy Secretary of DMV/California Highway Patrol Rhonda Pascal and Patrick West of Senator Jerry Hill’s office. Afterward, GCLA operators and vendors took to the capital and spoke to an array of representatives and their staff members about the association’s most pressing concerns. Members’ overall reactions to their boots-on-the-ground efforts were positive, while government representatives had much to share with GCLA.

Senate Transportation Committee Chair Randy Chinn spoke about the competitive landscape of transportation and the ways TNCs are affecting public transit, and how current troubles surrounding California’s PUC may lead to lowering regulations all around rather than increasing those relating to TNCs. He discussed AB-1677, a taxi/bus bill introduced in January about the authority to regulate and inspect vehicles.

Edmund Cheung of the Assembly Utilities and Commerce Commission also included the PUC among 2016’s major issues, touching on its possible dissolution and noting that other agencies, such as the departments of Motor Vehicles or Transportation, would have to take over its duties. Cheung also touched upon the necessity of defining what constitutes a bus from a regulatory standpoint as well as ramping up safety inspections for high-occupancy vehicles.

GCLA members also heard from Evan McLaughlin, the Chief of Staff for Assemblywoman Lorena Gonzalez, who is heavily involved in the state’s labor-related initiatives. He talked about how workers are currently facing a “gig” economy, wherein workers are finding more freelance-style jobs available than traditionally full-time ones. AB-1727, a bill sponsored by Gonzalez, is currently in the House and aims to amend Section 2750.5 of the Labor Code so that “a worker performing services for which a license is required under the Contractors’ State License Law, or performing services for a person who is required to obtain that license, is an employee, rather than an independent contractor.”

The next GCLA event will be its April 12 meeting in Los Angeles.