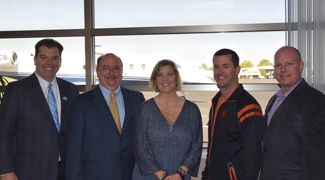 According to CRLA Secretary Laura Canady of CLT Express, text from that same bill—a nearly verbatim version of other ordinances that Uber has helped write—prohibits any city or county from regulating TNCs, creating an increasingly uneven playing field for regulated luxury ground transportation and taxis alike.

Additionally, “there is no other city in either of the Carolinas that regulates the way that Charlotte does,” which has caused a considerable amount of grief for those operating within the city’s limits and under the auspices of the Passenger Vehicle for Hire Department of the Charlotte-Mecklenburg Police Department.

“They regulate us, and so we have chauffeur permits and fees, vehicle permits and fees, and company permits and fees, so a few of us with larger fleets are paying quite a sum of money to operate in the city of Charlotte,” Canady said. “It’s always been a thorn in our sides but we have always participated instead of going rogue because we believe in certain regulations, and we want the city to be held to a higher standard.”

Now, however, CRLA has retained the services of an attorney well-versed in not only the association’s needs but also “all of the key players” from both the Charlotte City Council and city attorney’s office with whom it’s necessary to continue a dialogue. After members of the association’s executive board met to determine its attorney’s direction and the bargaining chips CRLA has in its favor, a battle plan has emerged for moving forward.

“We sat there as an association and agreed that we want our attorney to reach out to a couple of city council members who are on safety committees, and they’re the ones who are going to be helping rewrite this ordinance,” Canady said, adding that CRLA members and non-members operating in Charlotte alike have also pored over the ordinance text section by section to identify passages that are either outdated or apply only to taxis. “We asked our attorney point-blank what our changes are for getting what we want, so we’re aiming high and ready to negotiate.”

Canady added that she believes Uber’s “ways will pass” as the riding public finds that TNCs disregard the very regulations developed to promote safety in traditional transportation.

“Uber will always be there: It’s a great technology, but I think that the big wave they’re on now will level off,” she said. “As people learn more about some of the negatives, they’re going to ask, ‘Well, why aren’t you fingerprinting your drivers? Why aren’t you doing a more thorough background check?’ And so those of us already doing that will be fine, and we’ll be able to tell our clients that this is something we’ve always done. Safety has always been a key factor for us.”

The next CRLA meeting will be May 4.