OLOA Treats Members to a Day at the Races 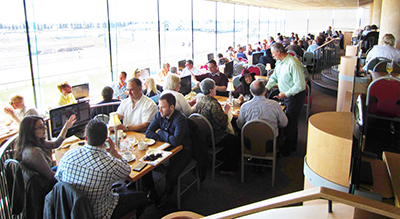 Nearly 50 members, supporters and their family members attended OLOA’s annual brunch outing at Woodbine RacetrackToronto — It was a milestone observance for the Ontario Limousine Owners Association (OLOA) on April 17 when more than 50 members came together for the tenth annual Sunday Brunch at Royal Woodbine Racetrack in Ontario.

The complimentary social event gives members, supporters, and their families a chance to enjoy each other’s company—even when shop talk does casually creep into the conversation—and is also an opportunity for OLOA to show its appreciation to those who work hard for both the association and the industry at large.

“The OLOA brunch is a social event that takes place in April every year,” says OLOA Treasurer Phil Bozzelli of Corporate Livery Toronto. “This is one event where we can give back to our members. It is a way for us to say thank you for being a member and supporting your association.”

In addition to being treated to a buffet brunch, OLOA’s guests were invited to try their luck at the horse races and with Woodbines’ slots, too, as the association provided each attendee with a $10 voucher to be used on the casino floor.