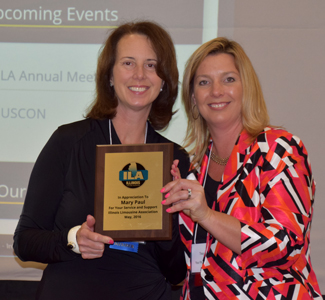 ILA President Tracy Raimer of Your Private Limousine (right) present ILA Director Mary Paul of Crown Cars & Limousines with an award recognizing her service and dedication to the associationSchiller Park, Ill. — When the Illinois Limousine Association (ILA) met up May 11 at Comfort Suites O’Hare Airport, the packed house boasted nearly 80 people, including the nearly two dozen supporters who flocked to the association’s general meeting from as far as the East and West coasts. Chauffeur Driven Publisher Chris Weiss, who’s on ILA’s board of directors, was also among the day’s guest speakers.

After touring some of the vehicles on display and networking before the meeting, attendees heard from ILA President Tracy Raimer of Your Private Limousine. She kicked off the full agenda by introducing the association’s board of directors before handing off the mic to Bill Faeth of Inbound Marketing Agents and Limo University, whose live workshop “The $4,000,000 Campaign” itemized the ways to quickly launch a marketing campaign to recapture old clients that, in the past four years, has generated more than $4M in revenue for companies in the chauffeured ground transportation sector.

Once sponsor introductions were made, there were two additional presentations before lunch. Spencer Tenney of Tenney Group discussed “Leveling the Playing Field with Industry Consolidators/Experienced Business Acquirers,” which covered topics like the industry’s rise of mergers and acquisitions, as well as the necessity of trusted guidance throughout the duration of the transaction or deal. He also utilized the “Shark Tank” format of evaluating businesses as a role-playing exercise, while Reston Limousine’s Keith Johnson also laid out his “B.A.S.I.C.S.” (Being Audit Safe Isn’t Complicated Seminar) program, with a focus on passing DOT audits and the requirements of Federal Motor Carrier Safety Administration’s record retention and recordkeeping. 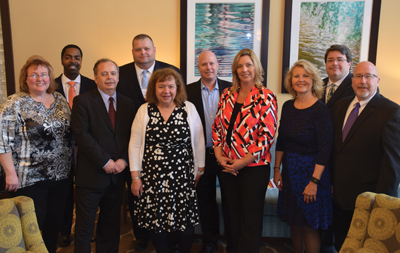 ILA's 2016 Board of DirectorsThe meeting then broke for lunch, which was followed by additional recognition of and thanks to meeting sponsors. Kristen Carroll of The LMC Group and Derek Maxwell of Chosen Payments spoke about “Small Business Hacks, Technology, and Trade Secrets,” offering tips and tricks to increase operational efficiency. Weiss then talked about the most recent industry trends before the slate of speakers closed out with Pasqualino Russo of Windels Marx Lane & Mittendorf, who provided and overview of both national and global TNC activity.

To cap off the annual meeting, numerous prizes were given out, including a pass to the 2016 Chauffeur Driven show in Washington, D.C., which was won by Todd Roberts of JACO Limousine. After Raimer gave her closing remarks and listed upcoming events that may be of interest to ILA members, the meeting was adjourned.

The ILA will hold an open board meeting Jun1.