WLA Meets up in Milwaukee 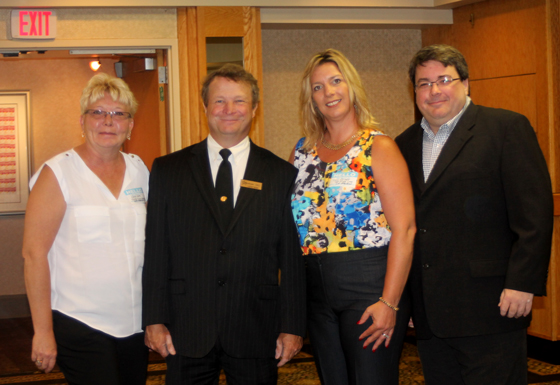 L to R: WLA Secretary/Treasurer Karen Lotts of A Knight Rider Limousine, WLA President Mike Hartmann of Stardust Limousine, Tracy Raimer of Your Private Limousine, and Brian Whitaker of Chicagoland Transportation Solutions Milwaukee — The Wisconsin Limousine Association (WLA) convened for an in-person meeting at the Clarion Hotel Airport June 26. CD Editor Madeleine Maccar was among the 30 members and supporters on hand for the daylong event that delivered an array of educational presentations amid plenty of networking opportunities.

After President Mike Hartmann of Stardust Limousines kicked off the meeting, he got right down to business by presenting WLA’s reasons for wanting the state’s 5-percent fee eliminated, which has been a thorn in the Wisconsin livery industry’s side for years. The fee is paid on any SUV that can accommodate up to 10 passengers and is only imposed upon our industry, as taxis, buses, and, of course, TNCs are not required to pay that same 5 percent. And especially in instances where road conditions require an upgrade from a sedan to a safer, higher-occupancy vehicle, the rule can create extra headaches and work for operators.

“It’s a major problem because you open yourself up to an audit with all the paperwork that goes with the fee,” Hartmann said. “We had one senator try to get it eliminated, but that didn’t help. We have to stand up or our taxes are going to snowball.” 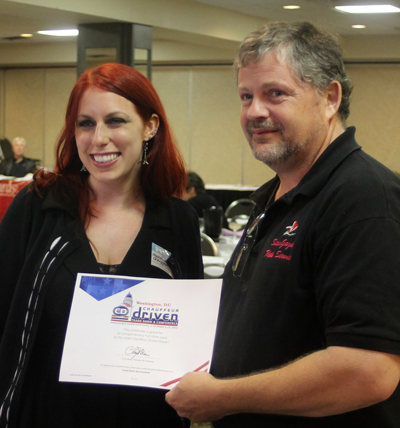 CD Editor Madeleine Maccar with Rich Linzmeier of StarGazer Limousine, who won a pass to the Chauffeur Driven 2016 Show in Washington, D.C. Gary Goyke, WLA’s lobbyist and a former senator, was the first guest speaker of the day and offered a little bit of insight into the 5-percent fee, explaining that it would be difficult to repeal because it was introduced as part of package that would benefit from “every vehicle putting a nickel or a dime into paying for the roads.”

He went on to explain how TNCs, especially Uber, operate in order to get so much done to their benefit—and behind the scenes in strategically selected areas where commercial transportation rules are vague enough so that any battle waged against the disruptors is “pretty much over as soon as it begins.”

“Their mode of operation is to work out of sight: no public notices, no above-board work, no public hearings,” said Goyke. “So when something like a hearing or schedule for passage is suddenly announced, we’re scrambling to get our people together while they already have theirs all lined up and ready to testify.”

Goyke went on to encourage all in attendance to become more proactive in or at least more knowledgeable of local and statewide government, especially in regard to identifying the elected officials who have thrown their support behind TNCs rather than homegrown and locally active services: “This is now part of your job as small-business owners. You have the leverage to stop them from getting re-elected.” 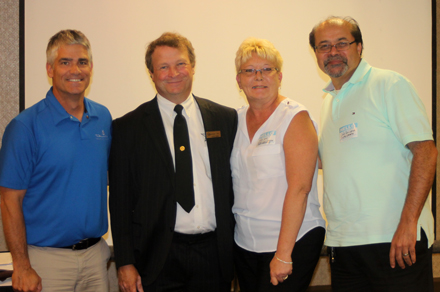 L to R: WLA members Rich Coffren of Telin Transportation Group, President Mike Hartmann of Stardust Limousine, Secretary/Treasurer Karen Lotts of A Knight Rider Limousine, and Samer Abulughod of Crystal Limousine & Coach. In a show of regional solidarity, representatives from the Illinois Limousine Association (ILA)—President Tracy Raimer of Your Private Limousine, Vice President Brian Whitaker of Chicagoland Transportation Solutions, and Secretary/Treasurer Paula DiBiasi of Chicago Coachworks—were on hand, and both Wisconsin native Raimer and Whitaker spoke about the legislative and regulatory woes that WLA’s neighbors to the south have been facing for nearly four years, offering up their experiences and insights in the hopes of helping operators in one of the TNCs’ newest battlegrounds.

Most recently, members of the ILA have filed a lawsuit against Chicago for showing preferential treatment to TNCs, which has been an ongoing process punctuated by testimonies, hearings, small victories, and big headaches—including representatives from the state beyond its Chicago suburbs admitting that they generally vote in favor of TNCs without fully understanding the issue and “because that’s how Chicago voted.”

Raimer urged those in attendance to read through Uber’s terms of service, drawing particular attention to its refusal of lability in the event of passenger injury or even death. She and Whitaker also highlighted how any kind of enforcement that would level the playing field at Chicago’s airports was lax at best, how TNCs aren’t paying the same airport fees as legally operating services are but are still winning over public favor, and how operators need to beef up their technological components to be a viable player in the transportation game these days—and how the technology suppliers in the industry need to start working together so operators can, too. 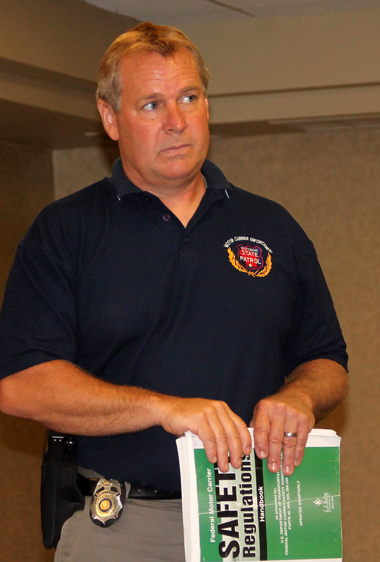 Guest Speaker Sgt. Mark Abrahamson of Wisconsin State Patrol takes a question during his presentation “We did need that technology shakeup that the disruptors brought but we will never again see the same industry we operated in five years ago,” Raimer said. “When TNCs first came to our market, we feared that we’d lose our relationship with the city of Chicago so we didn’t stick up for our industry—that was a huge mistake. We’re in survival mode now.”

Sgt. Mark Abrahamson of Wisconsin State Patrol then spoke about the state’s DOT regulations and enforcement, covering recent efforts to increase on-the-road safety and education on both a statewide and national level. While compliance with both DOT and FMCSA regulations were discussed at great length, Abrahamson also covered the differences between interstate and intrastate compliance, what constitutes a commercial motor vehicle in the legal sense, and how passenger capacity determines the applicability of each law governing the industry.

Since much of what Abrahamson covered have been thorny issues for Wisconsin operators, he also provided detailed lists about concerns like critical and acute violations of drug and alcohol policies, as well as safety audits and a flowchart and series of questions about both inter- and intrastate passenger-carrying vehicles, which can be accessed at goo.gl/IRCuJn.

Maccar closed out the speaker schedule for the day, discussing how Chauffeur Driven aims to assist the industry both in print and with its annual events. She also raffled off a pass to October’s CD Show in Washington, D.C., which was won by Rich Linzmeier of StarGazer Limousine.

The next WLA meeting will be its monthly conference call, scheduled for July 20.