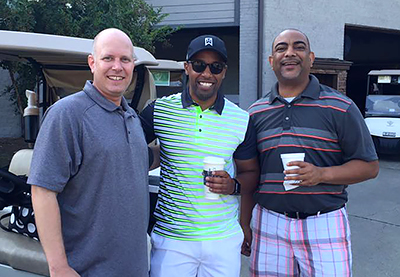 L to R: CD Publisher Chris Weiss, Hashim Abdi of Mint Life Limousine, and Khari Dickson of Divine Chariots Limousine Roswell, Ga. — On September 13, the Greater Atlanta Limousine Association (GALA), friends, and supporters from all across the country came out in droves for the Georgia association’s annual charity golf tournament benefiting the Aflac Cancer Center at Children's Healthcare of Atlanta. CD’s Publisher Chris Weiss was among the nearly 100 industry members making this the best-attended golf outings GALA has held, raising an incredible $40,000. 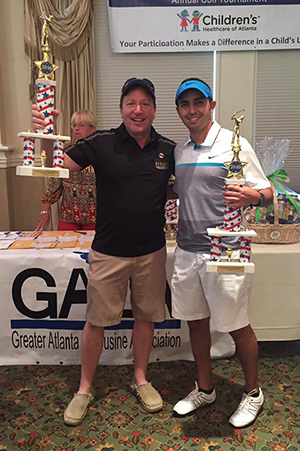 Arthur Messina of Create-a-Card (left) and Sami Elotmani of Destination MCO “We had 88 people making up 22 teams,” said Fred Rich of Olympus Worldwide Chauffeured Services, co-chair of GALA’s golf committee. “This is the biggest one we’ve had so far with the most sponsors ever, the most players ever, and the most out-of-towners ever.”

With a roster of site visits also planned around the yearly event, attendees toured local facilities and caught up with their Atlanta-market peers before taking to the Country Club of Roswell for a day of charitable camaraderie and an evening of good food at the event’s awards banquet, where Kirkley Hennessey of Hennessy Transportation won two passes to October’s 2016 CD Show in Washington, D.C.

The event’s nine-person golf committee was headed by Rich, who emceed the event, and Chad Casey of Casey Corporate Transportation, to whom Rich credits the charity tournament’s success.

“It took a lot of hard work and a lot of phone calls to make this event so successful,” Rich said.

Check out the November issue of Chauffeur Driven for expanded coverage of this year’s charity golf outing and tons of photos from the event.

GALA’s next membership meeting will be October 18.