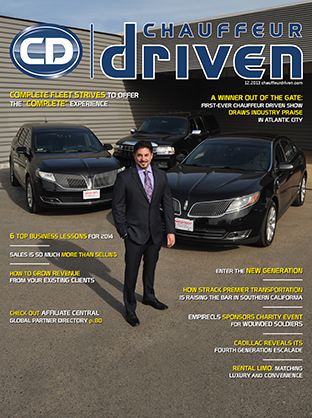 Barry Trabb of Complete Fleet, located at Maplecrest Ford Lincoln in Union, N.J., with a Lincoln MKT, Navigator, and MKS. Photography by Chris Weiss. Photography by Chris Weiss. Barry Trabb, Bruce Cirlin, and Dino ­Olivares of Complete Fleet & Limousine Sales ( completefleetsales.com) in Union, N.J., will be happy to sell you a vehicle, but you’ll probably get a little more than just your next fleet addition. You’ll likely build a friendship that will last longer than a one-time sale.

Trabb—president of Com­plete Fleet, a division of Maple­crest Ford Lincoln—has walked in the shoes of an operator. He started as a chauffeur when he was just 17, and by 20 he had founded his own transportation company, which is still in operation today. He transitioned over to fleet sales in 1999 and has partnered with several dealerships. He’s made his life and career about the transportation industry, and he’s always happy to share his knowledge with customers.

“I find myself giving advice to new operators to help them navigate the process of owning a business,” he says. “We make the process easy when purchasing a new vehicle—from the paperwork to the delivery—but it’s not unusual to also offer my help in other places. I’ve probably acted as a mentor to a hundred new operators over the years just because I’ve been where they’ve been.”

The entire Complete Fleet team has been in the industry collectively for more than 70 years. Cirlin, who has certainly built a following of loyal customers after 37 years in fleet sales, is vice president of sales for Complete Fleet and has been working with Trabb since 2001. Olivares, who is in sales and is the location’s finance manager, has 15 years of industry experience and joined the team in 2006.

Being part of a Ford Lincoln dealership, Complete Fleet has been integral in many operators’ transitions from Town Car to MKT and now MKS. Trabb and his team saw firsthand how operators resisted change, but he stuck to his guns and swayed some holdouts to give the new vehicle a try.

“We looked at the MKT and decided that we’re getting behind it, that it was the future. Dollar for dollar you’re getting a better vehicle than the Town Car with the MKT Town Car,” he says. “We heard it all: it looks too soccer momish, it has an odd shape. What we did was offer operators a demo to test in their own fleets because we knew once the customers got in the back seat, they’d love it. They did. It has a panoramic roof, which is great for operators in the city. It has all of the technology that the Town Car didn’t have. Clients are sitting higher up with plenty of leg room. It’s just a better vehicle.”

Lincoln heard the comments of operators who wanted a more traditional sedan look and released the MKS as an option earlier this year. Trabb thought for sure that the tide would turn and more people would get behind the MKS, but while the sales for the new sedan were brisk as expected, he noticed that the desire for the MKT didn’t wane. The demand actually increased. “Ford decided to aggressively price both the MKS and MKT back in March of this year,” he says. “They wanted to get the MKT as close to $40,000 as possible, which really pushed sales.” 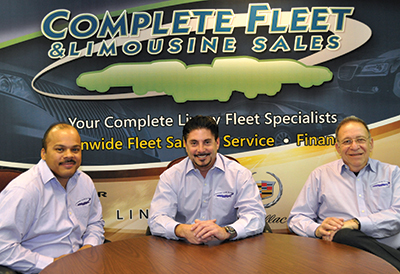 The Complete fleet team (L to R): Dino Olivares, Barry Trabb, and Bruce Cirlin Service is also a major component, and being a Lincoln LimoCare dealer means extended hours (6:30 a.m. to 6:30 p.m. most nights and open on Saturdays). The location also has five dedicated livery techs who understand the time-sensitive needs of the industry and stock a large inventory of Ford and Lincoln parts to get livery vehicles back out on the road quickly. Maplecrest Auto Group just completed a multi-million-dollar renovation to its facility. Part of the renovation was the acquisition of its neighboring building, which it has converted into a service center for trucks and limobuses (diesel included).

“We couldn’t ask for a better partner than Maplecrest,” says Trabb. “We partnered with a great dealership that truly understands the industry and works hard to keep operators’ vehicles in top condition.” The North Jersey dealership is located close to Newark Airport and New York City.

Ford and Lincoln products are Complete Fleet’s specialty, being headquartered at a Lincoln LimoCare location, but it is also working on increasing its affiliate program with other dealerships across the country so that customers in any location can have that seamless Complete Fleet experience. Trabb has also considered expanding Complete Fleet’s offerings to include other OEMs. He says he’s been approached by Cadillac and Chrysler to rep those vehicles, and it’s something he’s mulling over for the future.

One of the ways that Trabb stays involved with the industry is through the Limousine Association of New Jersey (LANJ), of which he’s a board member. The industry couldn’t ask for a better advocate because if you have five minutes, Trabb will educate you on the importance of belonging to local associations.

“Operators underestimate just how critical limousine associations are for their businesses,” he says. “It’s been through the hard work of associations that vehicle sales and repairs are tax exempt in the state of New Jersey. That has literally saved operators millions of dollars. Townships and municipalities are always trying to add on little fees and charge you more, but associations help to stop that. It’s so important to get involved because they are fighting for the greater good of all operators. At the end of the day, I think association members should be purchasing their vehicles from dealers who support their local associations.”

Trabb is serious in his support of local associations. A decade ago, he helped to launch the LANJ auction, a fundraiser which has collected nearly $100,000 over the years. The auction in May of this year alone raised more than $20,000 for the association—its best auction to date. He also established a program with LANJ, which features a discount for members who purchase a vehicle and rebates going back to the association. The program so far has donated $4,000 to the coffers of LANJ to help it in its legislative battles, of which there is never a shortage. Complete Fleet also recently instituted a similar program for members of NLA.

It may be cliché, but it really is who you know that helps you in business. We’re an industry that relies heavily on the cooperation of others to get us what we need, from extra cars in a pinch to transportation for a VIP client in a city not your own. When the foundation of service is a fleet of vehicles, nothing is more important than the relationship that an operator has with his fleet dealer. [CD12.13]