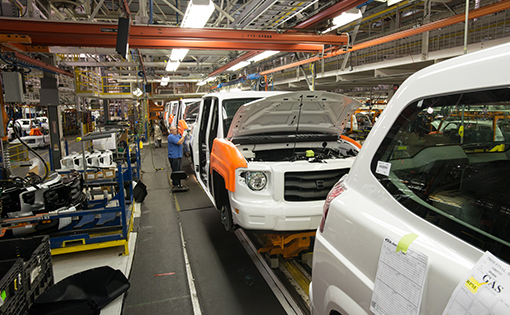 MV-1s being produced in the Indiana assembly plantWith all of the luxurious vehicles and purposeful products that are developed specifically for the industry, it’s rare to find something so original that it requires a deeper look. The MV-1 is truly one of those vehicles that combines function with many thoughtful touches showing the manufacturer’s thorough understanding of the accessibility market.

MV-1, which stands for the first mobility vehicle off an assembly line, debuted a few years ago. After an ambitious start with its original manufacturers, Vehicle Production Group (VPG), the ailing production was picked up by AM General Company, which has been around for more than a century. The reintroduction of the brand couldn’t be timelier: With an aging population and medical transportation slowly growing as a specialty niche in chauffeured transportation, options for accessible vehicles have been limited. A fresh infusion of marketing capital made sure AM General hit the ground running at the beginning of 2014 to bring industry awareness to this unique mobility vehicle. In addition to numerous local and international mobility shows, MV-1 was most recently at the 2014 Chauffeur Driven Show where it was the only vehicle of its kind on the floor.

The MV-1 is built by Mobility Ventures, which is a division of AM General. Since its original concept and design under VPG, it’s been assembled in the same plant that used to manufacture the wildly popular Hummer H2 in South Bend, Ind. It’s sold through one of 115 dealers all across North America, and it is rapidly expanding both dealer locations and sales throughout the world. By all accounts, the brand’s revival has been a successful one this year.

“What people often don’t understand is that we are an OEM just like the Big Three, on a smaller scale,” says John Walsh, vice president for sales and marketing. “We’re not building an aftermarket conversion van. The MV-1 is the first accessible vehicle built around the ramp and on the assembly line.” 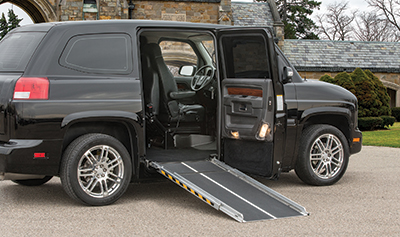 The LX features an electronic ramp that extends to two different lengths If it looks familiar and you can’t quite put your finger on where you’ve seen it, it’s a safe bet that it was in New York City being used as an accessible taxi. When dressed in the more palatable black rather than taxi yellow, the MV-1 looks like it would be right at home in any fleet. The charm of the MV-1 is that it was designed, from the ground up, to blend in with any other vehicle on the road while still having a distinctive look that is a mix of all the best features of an SUV, car, and minivan. Its “everyday” look camouflages its true purpose so that passengers in wheelchairs—each vehicle fits up to two, as well as three adult passengers—can ride without being noticed. Other mobility vehicles are retrofitted with aftermarket components, which often require additional modifications that make it a telltale handicapped-accessible vehicle.

The MV-1 is built on the same chassis as the late Lincoln Town Car with the familiar 4.6L V-8 to power it. Using many identical Ford parts as the Town Car—available through Ford Component Sales—it’s not surprising to Walsh that many think it resembles a Ford product on the inside. It is also available as a compressed natural gas (CNG) vehicle, straight off the assembly line.

“We are one of two manufacturers in the U.S. that produces CNG vehicles on the assembly line (Honda is the other). All other vehicles are done aftermarket,” says Walsh, who estimates that the fuel range is about 290 miles. He says that these vehicles are in demand in markets like Texas, California, and Oklahoma where there is access to fueling stations. “It’s an American-made car and you’re using American-made fuel ... what better story can you have for CNG?”

What people don’t often understand is that we are an OEM just like the Big Three, on a smaller scale. We’re not building an aftermarket conversion van.” – John Walsh, Mobility Ventures VP for Sales

Being an OEM, the MV-1 is subjected to safety crash testing through the National Highway Traffic Safety Administration (NHTSA), and because all of the accessibility components are part of the original build, it is the only accessible vehicle that is truly certified. Other passenger vehicles are tested at the time of manufacture, but are not retested with the additional, and often significantly heavier, components. Mobility Ventures, MV-1’s manufacturer, recently completed successful crash tests on 17 vehicles at varying speeds, angles, and positions according to regulations, which was then validated by three independent vehicle-testing companies. 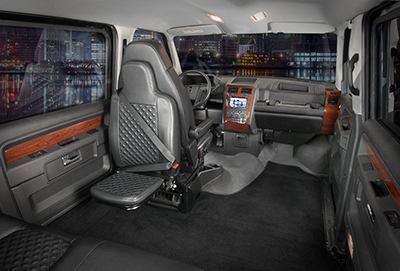 The MV-1 has space for two wheelchairs “These tests confirm, once again, that the MV-1 continues to be the safest wheelchair accessible vehicle on the market today,” says Walsh, “Our MV-1s are designed with a focus on passenger safety, factory-built to rigorous specifications, and tested and certified to meet government crashworthiness standards.”

The MV-1 is available in three different trims, but Walsh says that the LX has had the best application in the chauffeured transportation industry. It’s the top-of-the-line model that includes larger (20”) and upgraded wheels, wood-grain interior, leather seats, better electronic components such as a backup camera, and perhaps most importantly, an electronic ramp. Other trims feature a pull-out ramp instead.

“The LX’s ramp is a two-stage power ramp. You’ll use the short-length ramp for most purposes, but this is where it gets interesting,” he says. “Say you’re driving in the city and access to the sidewalk is a challenge. You can actually position the MV-1 between two parked vehicles and the long-length ramp will extend all the way to the sidewalk so the passenger can exit the vehicle safely.”

Ingress and egress of other passengers was also a consideration, and one of its most-loved features is it low step-in height. “Customers are always surprised that there is a low step-in,” says Walsh. “You forget for a minute that it’s wheelchair accessible. With larger SUVs, it’s often difficult for passengers to climb into, but with the MV-1 you just step up and sit down. A lot of vehicles in this class also cannot hold three adults—there may be three positions, but ours holds three 250-pound adults. Plus it has an enormous trunk space, which is very important in the chauffeured transportation industry.”

Walsh says that an announcement of an available extended service contact—which will increase the coverage to 7 years/100,000 miles—is imminent. It is currently being offered in selected areas as part of municipal contracts where annual mileage is obviously a concern like it is for our industry.

So what kind of vehicle is it? That might be a more difficult question to answer. The MV-1 is the only wheelchair-accessible vehicle listed in the NADA Guide for trucks, mostly due to its weight class. According to Walsh, he most often finds it classified as an SUV in the black car market, but for Altoona Testing, the Federal Transit Authority gave it the distinction of MPV or multipurpose vehicle. MPV seems to fit it just right. [CD1214]