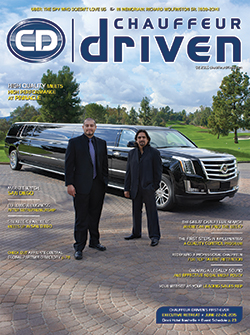 Cover Art: Pinnacle Limousine Manufacturing President Frank Figueroa (left) and Operations Manager Xavier Bermeo stand with one of their stretched Cadillac Escalades at California’s Industry Hills Golf Club. Photography by Lyle Okihara of Lyle Okihara Photography. Pinnacle Limousine Manufacturing’s President Frank Figueroa doesn’t consider himself a car guy by nature so much as a businessman who went looking for a challenge. Armed with his business degree, his cousin Xavier Bermeo’s vehicular expertise (which was parlayed into an operations manager role), and a desire to take on an industry with a high barrier to entry, Figueroa founded Pinnacle in 1999.

What started out as a small operation that rented space in another limousine manufacturer’s production facility for its first three months has grown in size, output, and reputation in the 15 years since Pinnacle entered the custom-build game. Today, Pinnacle is comfortably housed at its own shop in California’s Hacienda Heights, in a facility it’s called home since its second year of operation. Figueroa estimates that having produced anywhere between 60 to 80 cars annually for quite a few years means that Pinnacle “probably has a good 1,100” vehicles on the road today, not only in North America but also in locales as far-flung as Russia, Australia, and South Korea.

Catering to a diverse audience demands diverse offerings, and Pinnacle has customized vehicles of all makes and functions since its very first order, a Lincoln Navigator. Ranging from the ever-popular Chrysler 300s, Cadillac Escalades, and Hummer H2s to “those big 40-foot freightliners,” limobuses, and hearses, Figueroa is proud of the reputation his company’s high-quality custom builds have garnered over the years, saying that he knows Pinnacle’s vehicles, which are mostly built for the retail side of the business, are made to last—and impress.

“We get a brand-new shell and keep it classy: Our limousines look like they were put together with quality in mind so people will actually want them for weddings. It would be nice to get all the work that’s out there but I can’t drop my pricing below a certain point,” he says, adding that a lower price would mean using lower-quality parts and components, which are not compromises that the company’s willing to make.

That commitment to quality has led to some innovation at Pinnacle, as offering proprietary features adds to the appeal of its vehicles; for example, Figueroa says that his operation offers a dual AC compressor/dual alternator system in its Chrysler 300s, Escalades, Yukons, and Tahoes. 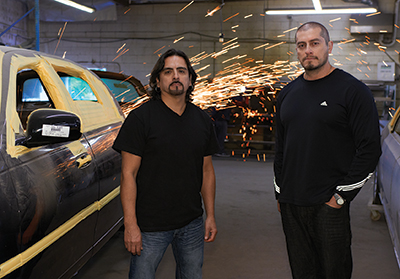 Figueroa certainly tries to keep trouble at bay, in terms of both the safety and durability of Pinnacle’s builds. He fields the occasional request for smooth-slide back doors and roll-up side windows—neither of which he’ll do, the former for safety reasons and the latter because “there’s no way to achieve the tolerance needed to keep them completely sealed”—and vehicles that are “as outrageously big as possible”—which he advises against for all the stress it puts on a custom job’s inner workings.

Pinnacle likes to push the creative envelope with its vehicles, but Figueroa has learned over the past 15 years that being the first to offer attention-getting features like the latest “it” technology and hottest gadgets rarely pays off in the long term.

“We’ve learned with time that we don’t want to take on the newest trends as soon as they come out because then we end up having a lot of factory recalls,” he says. “We’ll start adopting something maybe six months to a year later, once all the bugs have been worked out.” It’s also enough time to see whether something’s a flash-in-the-pan gimmick or a feature worth offering.

And the crew at Pinnacle—which usually hovers around 20 people—has certainly mastered a few tricks of the trade, like offering what Figueroa calls “the smoothest-closing gull-wing doors in the business.” While he tries to talk clients out of replacing OEM factory doors with the wing-like entryways and won’t cover them under the company’s standard one-year warranty, the Pinnacle team will proudly install them in the extended middles of their custom builds. “The factory doors are not square and they’re made out of very thin sheet metal, so they flex a lot and it’s very easy for them to get unaligned. I avoid making those into gull-wing doors,” Figueroa says. “But we design our middle gull-wing doors so that you actually have to push them to close: If you accidentally let go of the door, it doesn’t just slam shut and cause damage to the striker and latch.”

Figueroa has seen a number of other custom builders come and go during Pinnacle’s 15 years of modifying cars for the industry, so he knows that a stellar reputation is essential to weathering any number of storms along the way—and that the future of Pinnacle rests on continuing to produce the gamut of high-quality vehicles it’s become known for.

“Our vehicles have the best resale value in the custom-vehicle business because we’ve got a good reputation—we don’t cut corners,” he says. “Back when we started, there was a demand for high-end limousines built at a higher quality. That’s what we’ve concentrated on, and that’s what we’ve become known for.” [CD0215]