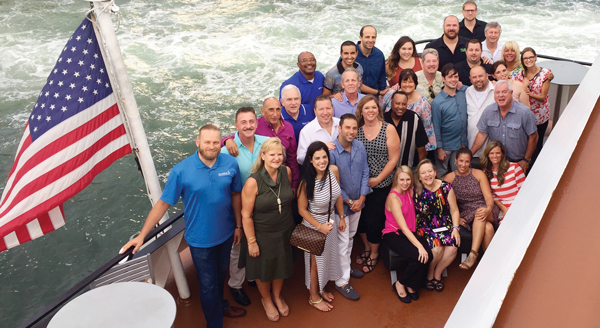 The Going Global affiliate managers group and guests on board the Odyssey dinner cruise in Boston Harbor In an interesting twist on “Bring Your Child to Work Day,” the Driving Results industry consulting organization recently held a “Bring Your Boss to Work” event at a meeting for their affiliate managers peer group, Going Global, in Boston on August 12-13. Held at the Renaissance Boston Waterfront Hotel, 35 people were in attendance at the meeting, which offered guest speakers, education, and networking. The event was sponsored by Royale, Grech Motors, Chosen Payments, and Above All Transportation/Boston Car Service, who was also the host.

Arthur Messina, Going Global’s managing director, got the idea for the affiliate managers to bring their bosses along after a surprise guest attended one of their meetings in New Orleans several months prior.

“George Jacobs from Windy City Limousine filled in at the last minute for his affiliate manager, Tricia Wilcoxen, at a meeting last year. He had such a good time that he wanted to come back,” says Messina. “But he didn’t want Tricia to be left out. So we came up with an idea to have a meeting that the bosses could be part of as well.”

The idea paid off as roughly 75 percent of Going Global members who attended the Boston meeting brought along their company’s owner or general manager. Messina was especially pleased that the meeting could host some of the industry’s leading operators.

Things got underway for the Going Global members the night before the meeting, when the group headed to Fenway Park for a baseball game between Boston Red Sox and their rivals the New York Yankees. As if the good company didn’t make this event notable enough, this was the final game that the Yankees’ future Hall of Famer Alex “A-Rod” Rodriguez would play at Fenway. 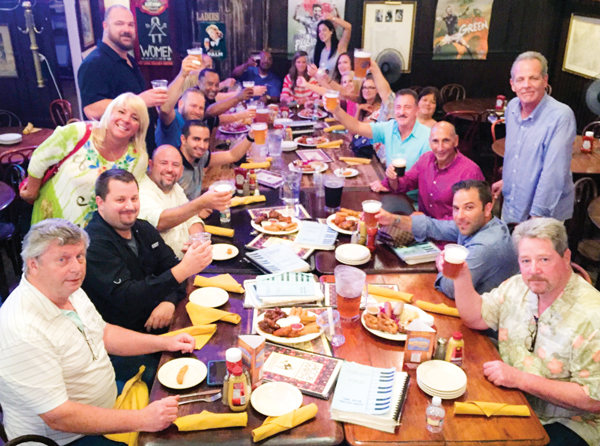 Going Global raises a glass during a group meal “We developed the meeting and educational program so that there would be valuable takeaway for both representatives of each company,” adds Messina.

The meeting officially kicked off the next morning at the Renaissance with breakfast for the group. After welcoming the members, and offering some quick recaps and housekeeping, Messina introduced two new affiliate managers to the group: Samantha Ferrer from AWG Ambassador in Las Vegas, and Stephanie Alligood from EcoStyle Transportation in Raleigh, N.C., who was accompanied by company Vice President Scott Tyler.

After an off-site lunch, Messina led a discussion with the members on preparing and executing a trade show plan. With trade show season upon us—not to mention the Chauffeur Driven Show in Washington, D.C., on Oct. 9-12—this presentation was timely and valuable. Messina shared tips with the affiliate managers, owners, and general managers on how to prepare for, set up, pay attention at, and not overdo it at a trade show. He also offered other integral advice on setting and accomplishing your goals as well as following up with new contacts after the event.

An open forum, round table discussion followed a quick break that covered what exactly affiliate managers do in their role, and what owners/managers expect from them. The discussion was met with full participation from everyone, and provided both affiliate managers and the “bosses” with valuable perspectives on their companies. 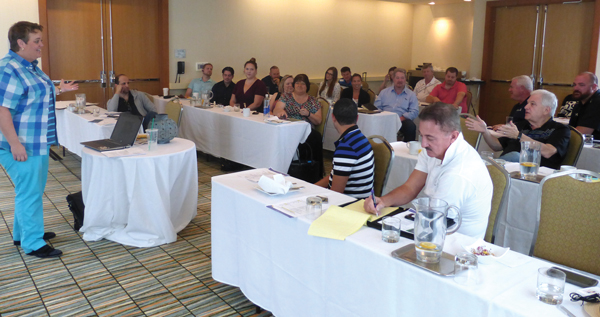 Kristen Carroll of the LMC Group gives a presentation on how to work better with affiliates The Driving Results meetings are typically characterized by innovative (and fun) team building exercises; however, due to the size of the group, and the vast spectrum of those present, the Going Global meeting eschewed any team building this time around. Instead the group took to the water for an evening dinner cruise on board the Odyssey. This scenic river trip around Boston Harbor not only provided a beautiful view of the city’s skyline, but also gave the group the opportunity to network.

Day two of the meeting began with a presentation from Kristen Carroll of The LMC Group. Her lecture, “Making Your Affiliate NetWORK for You,” detailed a combination of how to work with your affiliates and using them to build up your sales funnel, as your network can be a great resource to present sales opportunities. Carroll emphasized the importance of communicating your message in a proper manner, using e-blasts and other marketing.

After lunch, the members were given a tour of the Above All Transportation/Boston Car Service facility. These site visits are always well-received by peer group members as they provide an intimate, close-up look at how others run their operation. Before the meeting came to a close, a pass to Chauffeur Driven’s upcoming show in D.C. was raffled off and won by Ashley McMullin from Greater Houston Limousine.

The next Going Global meeting will be held December 1-2 in Phoenix, hosted by Driver Provider. [CD1016]