In-Depth with Daus: Will Trump Impact FTC's Policies on TNCs? 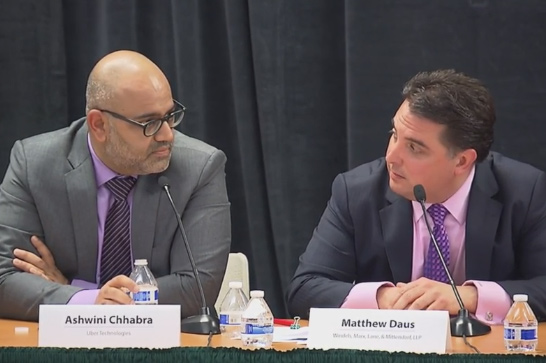 A complete video of the June 2015 panel with Daus, Uber, and Airbnb can be viewed here: goo.gl/BIe7K3 In June 2015, I was invited to speak on a panel entitled “The Interplay between Competition, Consumer Protection, and Regulation: Policy Perspectives” by the Federal Trade Commission (FTC) at a workshop on the so-called sharing economy. I spoke out against using that misnomer for TNCs because they never had—until recently and sparingly via the UberPool and Lyft Line services—actually shared rides at all. Rather, they were and still are simply providing the same service as taxicabs and for-hire vehicles (FHVs), delivering passengers from point A to point B (albeit dispatched through a smartphone app), and should be similarly regulated regarding safety and consumer protection standards.

In the last November of the Obama administration, the FTC published a staff report, “The ‘Sharing’ Economy: Issues Facing Platforms, Participants, and Regulators,” which expanded on the findings of the June workshop. The Obama administration originally expressed interest in and concerns about the fairness of state and local transportation regulations allowing the incumbent taxicab industry to exist in a supply-controlled market of limited medallions and local permits. However, since then, no official action was ever taken by the FTC, and TNCs quickly grew exponentially, dwarfing the influence, size, and market share of traditional taxi services in the U.S. in the process. It remains to be seen whether the incoming Trump administration will become actively involved in the consumer protection and fair competition issues in this arena, although some of his first-round cabinet picks have expressed support for the gig economy. This article will summarize the findings and issues raised in the FTC report, and will analyze what we know so far about whether changes may be on the horizon in 2017 and beyond.

The FTC report addresses the sharing economy as a whole, to include any online platform that provides a marketplace to bring together buyers and sellers of goods and services, but focuses mostly on the transportation (TNCs) and hospitality (Airbnb) sectors. The report explains that these platforms incorporate built-in trust mechanisms to encourage buyers to use them confidently, in which a rating system for sellers is created through aggregating feedback from the buyers. Although panelists from the workshop agreed that these reputation mechanisms worked well to grow the sharing economy, some pointed out that they might be biased toward positive or no feedback, instead of negative feedback. Also, this type of rating system may favor extremes because many users will only comment if they had a very good or very bad experience. Furthermore, panelists commented that the ratings can be manipulated with people leaving fake feedback. Workshop participants provided some suggestions on how to mitigate these possible biases or misleading ratings, concluding that the platforms themselves should provide interventions to promote buyers’ trust, such as background checks and insurance.

The report also discusses the ongoing debate on regulating these new online platforms. The FTC stated that regulators should aim to strike a balance between necessary measures to address consumer protection and safety concerns, while also encouraging innovation in their respective industries. However, the FTC did not specify which regulations are necessary and which are not in its report. It is interesting to note, though, that at an Antitrust Law section meeting of the American Bar Association (held April 15, 2015, at the National Press Club), I engaged in a robust discussion as a panelist (with a panel that included a FTC representative), and there was already concern about an “uneven playing field” between TNCs and taxicabs/FHVs on issues such as insurance and criminal background checks.

The FTC report sets forth the differing opinions stakeholders have on regulations, with representatives of the new platforms at the FTC workshop advocating for lesser regulations, arguing that their technological innovations make them different than the incumbent industry. Many workshop participants agreed that drivers for TNCs must undergo a background check, yet there was much debate about who should be responsible for these checks (the company or the government), and whether these background checks should include fingerprinting.

Trump recently named Elaine Chao as the Secretary of Transportation, who has acknowledged Uber and Lyft in the past as job creators. Media outlets like Business Insider have reported that TNCs are happy about the choice and could see a boost as a result, especially with autonomous vehicles."


Providing access to the vast amount of data collected by the new marketplace platforms to regulators was also discussed in the workshop and report. It was agreed that regulators could greatly benefit if they had access to the data and be alerted to problems they can address. Additionally, the report raised privacy and data security concerns stemming from the platforms amassing such large amounts of data on their customers and recommended that the FTC provide guidance in this area. Lastly, the report discussed how there is vast room for improvement for TNCs and taxicabs to provide transportation for both underserved communities in suburban areas and passengers with disabilities. Overall, the report provided a comprehensive recitation of the issues and set forth differing opinions on regulating the markets involved, but did not initiate a plan of action or direction for the agency or stakeholders.

A quick look back at history shows that the FTC was once involved in taxicab regulation issues in the 1980s. In 1981, then-President Ronald Reagan appointed James Miller III as head of the FTC. Miller generally advised against regulation in the name of consumer protection. In 1984, the FTC released a report criticizing local taxi commissions for the lack of competition in the taxi market, and alleged this contributed to a lack of lower fare competition. Armed with this report, the FTC brought lawsuits against the cities of New Orleans and Minneapolis, challenging their regulation of taxicabs as anticompetitive. The FTC alleged that these cities had colluded with private taxi companies to impose regulations increasing taxi fares, limiting the number of available licenses and engaging in other methods of unfair competition. Minneapolis avoided the lawsuit by acceding to the FTC and permitting more competition. New Orleans, however, succeeded in lobbying the state of Louisiana to authorize its regulatory paradigm.

FTC commissioners have been vocal in criticizing taxicab and FHV regulations in the wake of the rise of TNCs. Various FTC commissioners submitted comments to the then District of Columbia Taxicab Commission, with FTC Commissioner Joshua Wright publishing a piece in the Washington Post harshly criticizing the taxicab and FHV regulations that were promulgated in 2013, describing them as anti-competitive and onerous for the new market entrants, which were Uber and Hailo at the time.

Now, however, the future of ground transportation regulation under President-Elect Donald Trump is yet to be determined. At press time, Trump has not made any widely publicized comments in support of or against TNCs, although during his presidential election campaign, his staff used Uber 56 percent of the time (as compared to 44 percent being traditional taxicabs). Additionally, Trump recently named Elaine Chao as the Secretary of Transportation, who has acknowledged Uber and Lyft in the past as job creators. The incoming administration has yet to appoint new FTC commissioners, but Trump has chosen Joshua Wright, a Republican and former FTC commissioner, to head the transition of the FTC—the same commissioner who wrote the aforementioned Washington Post article. It remains to be seen what, if any, action the FTC will take under the new administration, but it certainly seems that the status quo is a possibility. [CD0117]

Matt Daus is a partner with the law firm Windels Marx, President of IATR, and a leading authority on ridesharing apps. he can be reached at mdaus@windelsmarx.com.