Global Partners Touches Down in the City of Angels 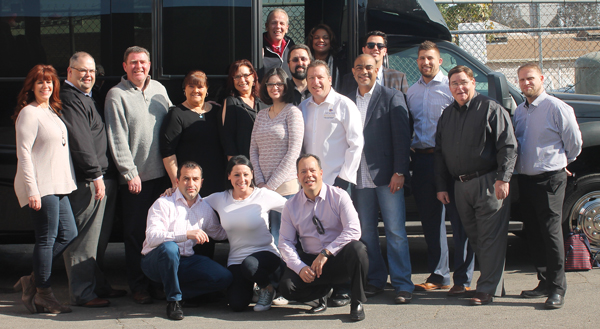 Much of the meeting was held at the Hilton Checkers right in the city’s Financial District—that included a rooftop gathering late Tuesday night. Offsite activities swept the group away to Greater California Livery Association’s (GCLA’s) annual meeting and holiday party, as well as a site visit to Advance Global Transportation’s under-construction garage and office to visit with President Tony Grigorian and his tight-knit team.

The meeting kicked off with a conversation about technology, namely what operators are using, what they like, what they don’t like, and what they’re excited about. The discussion inspired such passionate responses from the group members that it was a recurring topic throughout the day.

Later that morning, Maccar discussed ways that Chauffeur Driven aims to help the industry by providing information about changing trends, evolving laws, best practices, and advice directly from operators and their peers. She then helped walk the group through steps to craft an effective press release and offered advice to get the most from opportunities for free press. She then raffled off a pass to the 2017 Executive Retreat in San Francisco, which was won by Corey Witzel of Premier Transportation.

Even during the meeting’s downtime periods—like lunch at the nearby Bunker Hill Bar & Grille—the shop talk continued, with members breaking into smaller groups to brainstorm solutions to similar problems and catch up about previously hashed-out pain points. Updates about Global Partners itself were also part of the mealtime conversation, as Managing Director of the Driving Results groups Arthur Messina announced that 2017 will see the addition of two new members, Renee Ferraro of ZBest Worldwide Transportation and René York of LEADER Limousine—news that was met enthusiastically by all. After the meeting, Vancouver’s Star Limousine also joined the group.

“I’m definitely not surprised,” says Messina. “This is now the third year of Global Partners, and it just goes to show that the group has become like a family. The whole goal here is for them to build relationships so they can earn each other’s trust; in return, business will happen. If I only have to replace two people a year, it speaks volumes to me that we’re doing something right. Renee from ZBest and René from LEADER are coming into the group thinking that they’ll learn from the group—but it works both ways and the group members will be learning from them, too.”

Back at the Hilton, the group spent a few hours hashing out its goals for the first half of 2017, and continuing conversations that yielded more input, interest, and inquiries than their originally allotted time, before concluding the afternoon with a roundtable discussion of members’ most pressing topics.

Instead of a traditional team-building activity this time, the group capped off the first day of its meeting by attending the festive GCLA holiday meeting, which included silent and live auctions, sit-down dinner, and plenty of networking opportunities—which allowed the affiliate managers hailing from all across the country to meet face to face with their California affiliates. And a few of the members even contributed to the fundraising efforts of the evening, which benefited GCLA and its ongoing regulatory battles.

“There are several benefits: Most of the members who aren’t owners got to see how an association event is run,” explains Messina. “It also let them spend time with industry leaders and icons from the California area, plus the opportunity to see people they send work to or get work from that they don’t usually get that face time with.”

“It was great because at the bigger industry events, you don’t always get that one-on-one time with people we only see a couple times a year,” Mary Johnson of The Driver Provider added. “We got to spend time with them and talk business without having tons of other people waiting around for their turn.”

The next day began bright and early with a morning site visit to Advance, where Global Partners members and Advance employees Grigorian and Sue Lynch gave a tour of their garage and office, showed off their fleet—including a new Grech bus—and talked to the group about their plans for the future.