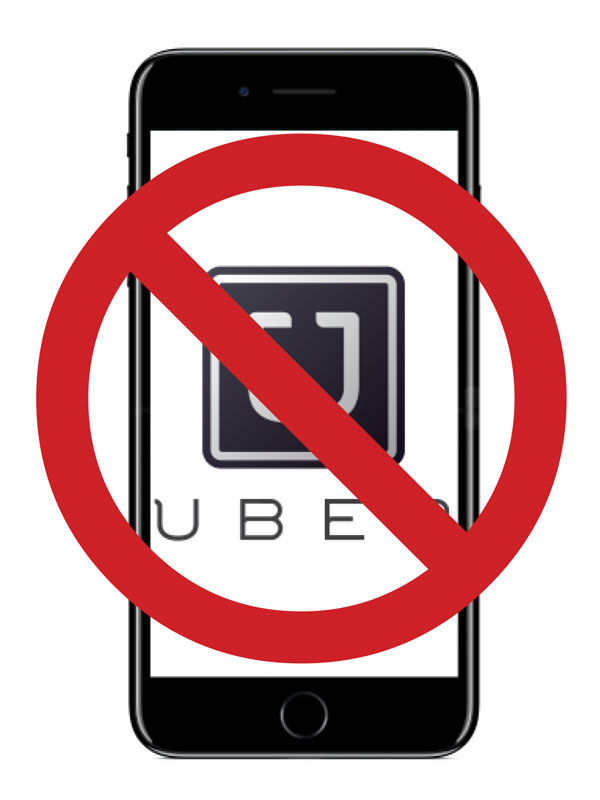 The Tangled Web of #DeleteUber
Perhaps you heard about the #DeleteUber movement that tore through social media in January? If not, here’s the backstory. President Trump signed an executive order on January 27 that stop-gapped Muslim-predominant countries’ immigrants and refugees from United States entry for 90-120 days, which was quickly redubbed as a “Muslim Ban” by many.

This prompted protests nationwide, but none was more impactful than the one at ground zero—John F. Kennedy International Airport (JFK)—led in part by the New York Taxi Workers Alliance (NYTWA), a union of taxi drivers in The Big Apple. Citing its largely Muslim and immigrant working-class base, NYTWA encouraged its 50,000 drivers to observe a one-hour work stoppage of pickups at JFK in solidarity with those passengers denied U.S. entry. A tweet from Uber then ruffled some feathers when it announced that surge pricing had been turned off at JFK but could result in longer than usual wait times—which many read as either profiteering or strike-busting. The backlash was swift, prompting many to taunt the TNC with screen-captures of them deleting the app from their smartphones.

Uber attempted to clarify its stance but the damage was done. It got worse when word spread that CEO Travis Kalanick—a self-described libertarian—was part of the president’s Strategic and Policy Forum, which includes Elon Musk of Tesla and SpaceX, Indra Nooyi of PepsiCo, and Bob Iger of The Walt Disney Company. Several days later, and in order to stem the severe backlash that Kalanick and Uber were facing, Kalanick resigned from the forum. All told, between 200,000 and 500,000 customers (estimate ranges are all over the place) deleted their Uber app and account.

Uber’s misfortune, however, was quite beneficial to its closest competitor. Lyft co-founder Logan Green quickly capitalized on the situation by announcing that the company will donate $1 million to the ACLU over the next four years “to defend our constitution.” Within days, Lyft flew past its rival and shot up to the No. 7 spot for free downloaded apps in the Apple Store. At press time, the #DeleteUber movement was still limping along, although Uber has since rebounded to the No. 10 position at the Apple Store (as of February 14) while Lyft was at No. 28. Also, taxis and local taxi apps did get some love during the firestorm, as social media not only highlighted political alliances of the TNC CEOs and investors but also drilled down into both apps’ independent contractor status—which is seen more as exploiting workers among socially conscious Millennials rather than the entrepreneurial, work-when-you-want spin that TNCs craft.

Less than a month later, Uber was delivered another blow when a former female engineer published a blog detailing what she calls a culture of sexual harassment with an ineffective HR department. Again in crisis mode, Uber hired former Attorney General Eric Holder to investigate the claims, but not before it resparked the #DeleteUber campaign (goo.gl/zg1A1i).

The story isn’t over: While Lyft was virtually unscathed in the strike dustup despite ALSO continuing rides at JFK during the strike, some have called out the TNC for its investors. The two main targets of social-justice ire are Peter Thiel, who spoke at the Republican National Convention and was a vocal Trump supporter, and billionaire Carl Icahn, who has frequently been in the crosshairs of many unions over the years (including those in Atlantic City when the investor purchased the debt of a distressed Trump-in-name-only casino but ended up closing it a year later after he tried to slash retirement and health benefits).

We’re not sure where this fast-changing chronicle will be in a month, but one certainty is that we are living in extremely divisive political times. It’s a cautionary tale to any business—and its employees—wearing its politics or social issues on its sleeve. Social media moves rapidly and wounded a multibillion-dollar company like Uber in a matter of days, enough to cause Uber to go into crisis mode and for Kalanick to shift his priorities; imagine what could happen to smaller companies with just a fraction of that determination.

Politics, social issues, and religion have always been murky and oftentimes off-limit areas when it came to business, and for good reason. But times have changed and the boundaries between where your personal and business personas exist digitally have blurred. If you have friended clients and business affiliates online or have an open profile, be aware that they are reading your views and making their own decisions about doing business with you, fair or not. Savvy potential customers are searching for you and your employees online before calling your company. Are you giving them reason not to? [CD0317]