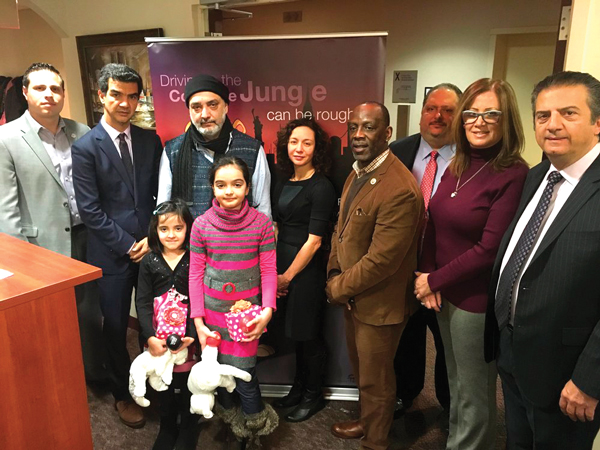 L to R: Jim Conigliaro Jr. of Independent Drivers Guild; Council Transportation Chairman Ydanis Rodriguez (D-Washington Heights); Shafqat Khan; Farwah Ameen; and Hadiyah Ameen; TLC Commissioner Meera Joshi; Councilman I. Daneek Miller (D- St. Albans); Ira Goldstein; Diana Clemente of Big Apple Car; Berj Haroutunian, chairman of BCF In last month’s column, I gave you all an update on what has been going on in New York’s capital, and its impact on for-hire vehicles (FHV). As you might recall, there were two pending bills; one that came out of New York Governor Andrew Cuomo’s budget, and one that was introduced in the New York State Senate by Senator James Seward. At the time, I also had reported that a third bill was expected to be introduced in the New York State Assembly; while it is still anticipated, no such bill had been introduced as of press time.

Regarding the two bills that had been introduced, I reported that both included elements that would undoubtedly hurt bases in Downstate New York. Since then, the bill introduced in the Senate by Sen. Seward has been passed; however, the reaction from Upstate New York’s taxi drivers and other industry stakeholders has been largely negative, specifically citing the lack of fingerprint background check requirements. These groups have accused the Senate of “going soft on public safety,” saying that if Upstate taxi drivers are required to submit to fingerprint background checks, then TNCs should be required to as well. Also worth noting: The Senate bill only calls for a 2-percent sales tax on such services, whereas Gov. Cuomo’s proposal calls for a much more substantial 5.5 percent.

In response to this recently passed Senate legislation, I am happy to report that the interests of the FHV industry were well represented by both The Black Car Fund (BCF) and the Black Car Assistance Corp. (BCAC). We share the opinion that the public, as well as longtime existing businesses, deserve a level playing field with respect to safety and competition. On February 15, BCF and BCAC sent Berj Haroutunian, BCAC president, and Guy Palumbo, BCF’s director of driver education and outreach, to testify at the New York State Senate’s most recent transportation hearing.

Haroutunian made clear several key points, such as the fact that many people, both members of the public and politicians, are often quoted as saying that Upstate New York should have access to TNCs just like Downstate New York (such as New York City). However, TNCs do not actually exist Downstate; in order for companies like Uber and Lyft to operate within New York City, they were required to become black car bases and operate as such. Haroutunian also advocated for the rights of local municipalities to regulate TNCs as well as for the New York City bases not to have their business poached as a result of boundary infiltration. Finally, he pushed for TNCs not to specifically have their own industry category, but to instead remain a part of the FHV sector. In turn, this should mean that all sectors under the FHV category should adhere to uniform tax requirements. Palumbo reiterated BCF’s responsible history and pushed for it to remain the sole provider of workers’ compensation coverage for black car and luxury ground transportation chauffeurs across the state.

BCAC also recently met with the Port Authority of New York & New Jersey (PANYNJ) regarding the excessive and onerous access and permit fees it intends to impose on our industry at area airports, which includes John F. Kennedy International, LaGuardia, and Newark Liberty. I will provide more details as the situation unfolds; for now, rest assured that we are looking out for the industry’s interests.

In closing, I’d like to share some good news. On February 14, BCF announced a new Driver Death Benefit. The program will bring much-needed financial relief to families who have lost a dearly loved relative. This $50,000 payment is intended to serve as a safety net for the families of drivers who, while on a job, tragically lose their lives while making sure New York keeps moving. This payment is in addition to any benefits the driver is entitled to under New York State workers’ compensation law. I couldn’t be prouder of the endeavors pursued and accomplished by both BCF and BCAC.

At the February event, the first of these checks was presented to Shafquat Khan, the brother of a black car driver who was killed along the side of the Long Island Expressway in 2016. The deceased driver, an immigrant from Pakistan, is survived by his wife and four children. While this money does not make up for the loss they have endured, we hope that it will alleviate some of the financial pressures this family is sure to encounter down the road. New York City Council members Ydanis Rodriguez (who also serves as the chairman of the City Council’s Transportation Committee) and I. Daneek Miller, as well as NYC TLC Commissioner Meera Joshi, attended the event and also delivered a few remarks. Their support of this overdue, important new benefit of BCF is appreciated. We have more information about the benefit as well as pictures from the event and all of the latest updates on BCF’s website at nybcf.org or on Facebook at facebook.com/NYBCF. There will certainly be a lot of developments throughout March, so stay tuned for the next Black Car Report. [CD0417]

Ira Goldstein is the Executive Director of the New York Black Car Fund and the Black Car Assistance Corp. (BCAC), and is both a TLPA board member and co-chair for its limousine & sedan steering committee. He can be reached at igoldstein@nybcf.org.