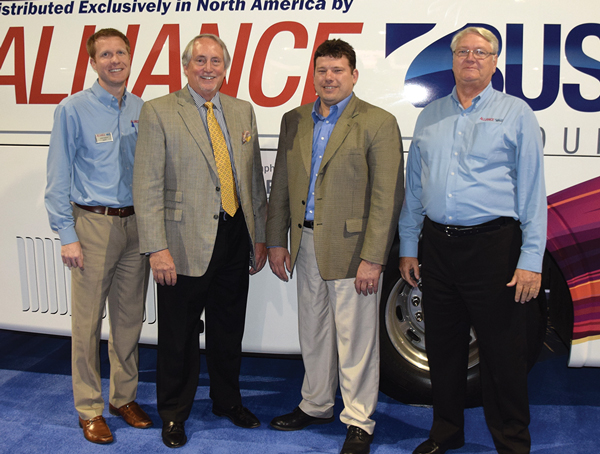 L to R: Nick Corley, Doug Dunn, and Eugene Hotard of Alliance Bus Group and Klaus von Winckler of CAIO The United Motorcoach Association (UMA) Expo headed to Atlanta from January 31 to February 4 for a few days packed with information about the newest in motorcoach trends and equipment, education catering to industry veterans and newcomers alike, and plenty of networking opportunities for the event’s nearly 1,800 conference-goers.

Chauffeur Driven was among more than 100 exhibiting vendors participating in the event held at Georgia World Congress Center, with Publisher Chris Weiss and Director of Events Jess Pavlow representing the CD team.

The theme of the 2016 Expo was “Where great businesses are built,” and much of the event’s offerings catered to that message by helping attendees learn how to diversify and grow their companies while expanding their professional networks. Many of the classroom-style educational offerings focused on marketing, finance, operations, and even smaller businesses, while the bigger sessions tackled topics such as embracing technology, purchasing pre-owned vehicles, and passenger safety.

“There were a number of issues that we covered, and we work hard on our education programs to come up with timely issues,” said UMA President & CEO Vic Parra. “One of the marketing sessions we had was integrating online and offline marketing so operators can leverage each channel effectively, and it was very well-received. We talked about some of the new requirements, like the electronic monitoring devices that will be required to be on buses in a couple years. And that session was packed—it was standing-room only.” 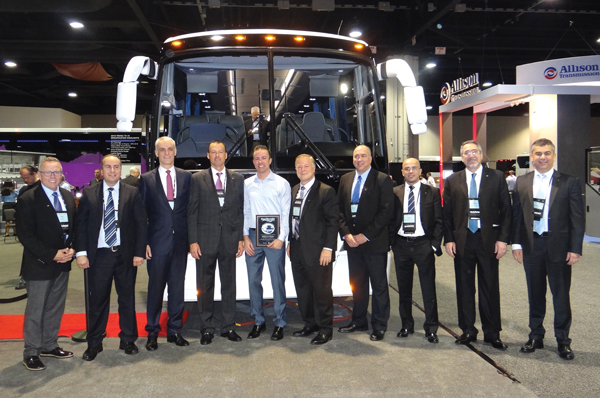 L to R: Tim Vaught of CH Bus Sales, Osman Dundar and Mehmet Pekarun of Temsa Global, Duane Geiger of CH Bus Sales, Shannon Kaser of Royal Excursion, Robert Foley and Randy Angell of CH Bus Sales, and Deniz Cetin, Dincer Celik, and Ibrahim Eserce of Temsa Global For a bird’s-eye view of the motorcoach industry, the 12th UMA Annual State Association Summit, held on the Expo’s first day, was where industry leaders met to discuss and learn more about the Highway Bill, CDL testing, and a range of legislative and operational concerns on a state-by-state basis.

The first day also hosted keynote speaker Andrew Young, formerly Atlanta’s mayor and a United Nations Ambassador, who spoke about how the motorcoach industry remains vital to the American infrastructure for its ability to ferry riders from point to point across the country. Young received a standing ovation the likes of which Parra said that he hasn’t seen in his 18 years with the association.

“We kicked off the show with an amazing keynote speaker who everyone was just so excited about,” Parra said. “It was the first time I’ve seen our attendees jump out of their chairs and applaud—and that kind of positive opening carried throughout the whole show.”

Another Expo first that Parra “was really pleased about” was a consistently high-traffic floor that showcased a greater number of buses than UMA has ever featured.

“The floor is usually pretty dead on the last day; this year, it was hopping—exhibitors were telling me that they were just as busy then as they were on opening night,” he said. “We had more than 43 buses on the floor—the most we’ve ever had. We had new players coming into the market like Irizar, a bus manufacturer in Spain, and the fact that the Europeans are looking at the U.S. market suggests that the market has improved.” 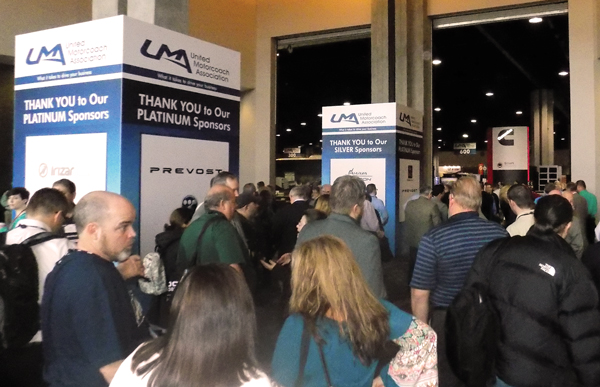 This year’s UMA Expo drew a crowd of nearly 1,800 attendees Networking was also a significant component of the conference, and attendees had nonstop opportunities to get to know one another, starting with the first day’s Welcome Reception and UMA Expo Sneak Preview After Party, held at the World of Coca-Cola, as well as the music-filled UMA Leadership Awards Celebration, which honored UMA members who have proven to be dedicated industry representatives. The 2nd Annual Go Motorcoach Fundraiser and Party was another successful event benefiting the Go Motorcoach Campaign, which helps increase public awareness of the advantages of motorcoach travel.

“As proud as I was of the education, the networking was great,” Parra said. “We reinstituted our Welcome Reception and people absolutely loved it. It’s the sort of event that gets people to reconnect and catch up, and vendors love it because they get to make a social connection with their customers that really sets the tone for what takes place on the show floor in the days to come.”

Parra added that the Expo can be hugely beneficial to ground transportation operators who are new entrants onto the bus and motorcoach scene.

“We had a whole educational track for people just getting into the bus industry,” he said. “It covered all the rules and regulations, as well as some of the dynamics of the business—we do a lot in the area of financial management. The industry is always changing: The ways companies are growing their markets and capturing new business are very different from how it was when I started. Part of it’s driven by changes in consumer behavior, a lot is being driven by new technology.”

But one thing that hasn’t changed is the Expo’s “strong family environment.”

“There is so much history at this show,” Parra said. “People have been coming to this for generations. Some of my board members grew up coming to the Expo as kids and now they’re running the business and they’re meeting new people and seeing the friends they made over the years. It was really heartwarming to see that whole dynamic play out.”

UMA’s next event is its Capitol Hill Days, which typically brings more than 100 members to Washington, D.C. for meetings with elected officials, slated for April 12-13. The 2017 UMA Expo will be held from February 26 to March 2 in St. Louis, Mo.