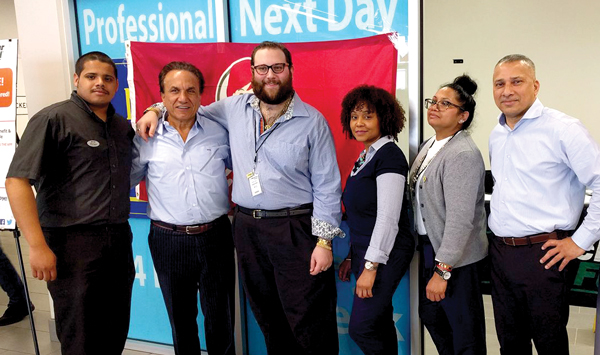 The BCF team during an April driver outreach event at the JFK Travel Plaza April was quite a busy month for The Black Car Fund (BCF). For those of you who may not know, as the workers’ compensation insurance provider for the black car and luxury limousine industries in the state of New York, BCF covers more than 300 member bases and over 70,000 drivers, as well as a great deal of New York’s for-hire vehicle (FHV) drivers. Something BCF strives to continuously improve is our ability to get assistance to our claimants as quickly as possible: In doing so, they are able to recover and get back to work quickly.

A few years back, we rolled out the BCF Claims app for drivers in the event of an on-the-job accident/injury. It allowed drivers to pinpoint the exact location of the incident and submit details while the accident was fresh in their memories. It helped in not only improving incident detail accuracy but also getting drivers the assistance they needed as quickly as possible. I am proud to announce that we have updated and relaunched the app, which will assist drivers more effortlessly than ever before. Down the road, there will be various features to aide in both driver and passenger safety, which will increase the level of customer service for all of our member bases. The new BCF app is available in both the Apple App and Google Play stores.

To celebrate the launch of our new app, the BCF team held a driver outreach event April 5 at the JFK Travel Plaza. Many of our drivers use the plaza as a rest and relief outpost, and it has graciously hosted many of our driver outreach events these past few years. This year, every driver who stopped by to learn about our new app walked away a winner, with prizes ranging in value anywhere from $5 to $25—not to mention the invaluable education and networking they enjoyed at the event, too.

The New York City Taxi & Limousine Commission (TLC) recently put out a Notice of Public Hearing for April 6 to discuss the economics of operating taxis and FHV in New York City. In the notice, the growth of the FHV industry is referenced: According to TLC, since January 2014, there has been a 40-percent increase in licensees, raising that total number to about 156,000. During that same time period, TLC also reports that the number of FHVs has increased by 74 percent, resulting in a total of 105,200 vehicles.

Regarding ridership figures, TLC found that there were about 70,000,000 trips made in the fourth quarter of 2016, a 14-percent increase over the same time period in 2015. It is because of this staggering growth that TLC is looking for testimony regarding the effects of growth on things like drivers’ income and expenses, medallion or vehicle leases, bonuses and service incentives, mobility across sectors, fuel costs, insurance, base affiliation fees, fare commissions, tolls, taxes, and vehicle financing.

One of the biggest issues BCF is currently working on is legislation in Albany. New York is one of just two states in the country where e-hail legislation has not been passed on a statewide level (Alaska is the other one). In my last column, I reported that there were two bills pending: one that had come out of Governor Andrew Cuomo’s budget, and one that was introduced in the Senate by Senator James Seward.

I also reported that a third bill, expected to be introduced in the Assembly, was anticipated; it has since been introduced. Here are the key facts to know about this recently unveiled legislation:

• Companies can be fined for drivers who repeatedly violate laws;

• Companies must post on their website information about specific fare levels and how the fares are calculated prior to the charging of any such fare;

• It gives specific powers to the state Attorney General to investigate allegations of wrongdoing by e-hailing companies;

• It requires minimum insurance coverage levels be set at $1.5M while transporting passengers;

• It gives localities the ability to establish their own consumer protection standards;

• It requires a statewide government database for driver criminal background checks, rather than allow e-hail companies to conduct their own;

• E-hail vehicles would be required to have a sticker affixed to the windshield specifying which e-hail company the vehicle is affiliated with;

• Sales tax would be collected based on where the ride originates and steers the local share into municipalities’ general funds to let local government officials decide how the additional proceeds are spent; and

• It bans drivers from refusing a ride based on any type of discrimination, and empowers the NYS Division of Human Rights to investigate discrimination claims.

Regarding possibly required insurance coverage minimums, Assemblymember Kevin Cahill has said that different coverage levels would be used at different times—such as when a driver is responding to a call, for example—but that the precise coverage levels are still under review. Also of importance is the fact that nowhere in the Assembly bill does it require fingerprinting when discussing background checks, though Cahill claims that fingerprinting requirements are still very much an “open conversation.”


"New York is one of just two states in the country where e-hail legislation has not been passed on a statewide level.”


I am happy to report that, for now, we can declare victory with the Port Authority of New York & New Jersey (PANYNJ), which operates the three major air hubs served by BCF and luxury ground transportation industries—JKF, LaGuardia, and Newark Liberty International. PANYNJ had proposed a $4 access fee that would be imposed upon all taxicabs and FHVs doing either pickups or drop-offs at any of the three hubs. Needless to say, the Black Car Assistance Corp. (BCAC) understood how debilitating this would have been to our industry in New York. On behalf of the BCAC, I personally met with PANYNJ officials numerous times to advocate in defense of our industry and its best interests. As a result of the efforts put forth by both BCAC and other industry groups, I am happy to report that the issue of any type of access fee has been pushed to 2018.

In a show of support, NYC’s Public Advocate Letitia James sent a letter to Governors Cuomo of New York and Chris Christie of New Jersey calling for the abandonment of the proposal by the PANYNJ, stating that the $4 access fee would create even more of a burden for New Yorkers.

In addition to the $4 access fee, the PANYNJ was also pushing for something called a privileged permit fee, which would have been a one-time payment ranging between $5,000 and $200,000 per base, dependent upon airport ride volume for each particular base. Through numerous meetings, I am happy to report that this concept has been eliminated, saving countless New York bases from onerous, crippling fees. [CD0517]
Ira Goldstein is the Executive Director of the New York Black Car Fund and the Black Car Assistance Corp., and is both a TLPA board member and co-chair for its limousine & sedan steering committee. He can be reached at igoldstein@nybcf.org.