It was all style and class when Professional Driver magazine (­prodrivermags.com), a publication for the U.K.’s livery industry, held its first ever Quality, Service and Innovation (QSi) Awards ceremony this November 21 in Effingham, West Sussex. The awards honored Britain’s best private for-hire transportation operators. 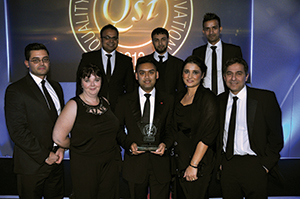 “The team at Professional Driverreally know how to put on an event,” says Weiss. “The level of sophistication was outstanding for any ceremony, let alone their first one.”

Gold, Silver, and Bronze awards were broken up between nine categories and judged by Motor Trader Deputy Editor Mark Bursa, Drivertax FCPA Gary Jacobs, and Professional Driver Contributor Ed Halil. The awards, according to Professional Driver, were given to “operators and individuals that demonstrate excellent standards of quality, service, and innovation.” Awards went to the following: 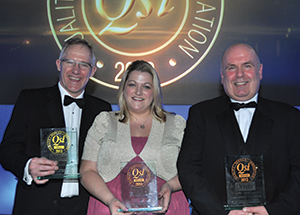 Dean DeBeer (left), Patricia Gardiner, and Maurice Holman of Tristar Worldwide Professional Driver has also named its Car of the Year awards for 2013. The judges included veteran chauffeurs, heads of private hire firms, and motor industry editors and journalists. Judges tested over 40 vehicles on scrupulous grounds—driving in urban and open roads, riding in the back seat as well as the driver’s seat, and using test luggage to gauge space. After scores were tallied, the winners were selected, and from those winners, judges selected the ultimate Car of the Year. The winners were:

“It was great to see so many smiling faces [that] night,” says Professional DriverEditor Mark Bursa, “Nobody has ever done anything like this for our market before, and the response was fantastic, with winners from as far afield as Newcastle-upon-Tyne, West Lancashire, and the South Coast.”

Professional DriverPublisher Paul Webb says the night was best captured in the words of finalist Kevin Willis of Chirton Grange Chauffeur: “With open arms I welcomed the awards and the night proved to be a triumph. With people of this quality, this industry can only get stronger and we will be back next year to win.” [CD01.14]