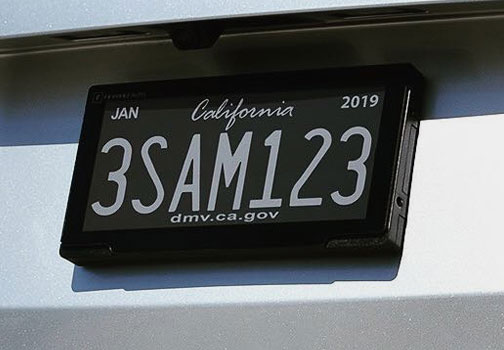 Digital License Plates Are Here:
Gimmicky or bloody brilliant? California becomes the first in the nation to allow the purchase and use of digital license plates, and Florida, Texas, and Arizona aren’t far behind. The pricey digital plate—which is currently only approved for the rear and is being sold through dealers rather than state agencies—retails for $699 and has a monthly fee in the $7 range. Galpin Ford, the largest Ford dealer in the world based in SoCal, was among the first to announce that it partnered with the digital plate manufacturer back in January. What you get in exchange are online registration renewals (which is supposed to save you a trip to the DMV!), the potential to display an ad for your company when the vehicle is stopped, theft protection (plate displays “stolen”), and customization with your favorite cause or sports team, pending local approval. In the future, the plates could also display time left on your parking meter, amber alerts, and weather/emergency advisories. But your digital plate could also give you away if you don’t renew your registration or operate without insurance. California’s pilot program was rolled out on city vehicles in conjunction with its new high-speed 5G network; no word yet on when they will be available for limousine companies. Despite built-in protections, expect to hear about hackers rising to the challenge.
Source: Sacramento Bee, WFTS Tampa Bay, galpinford.com Tough Talk in Turkey:
Turkey’s President Tayyip Erdogan has said that the transportation-app-turned-logistics-company Uber is done operating in the country, thanks to serious push-back from the taxi lobby. Erdogan cited that Uber is a “European thing” and that it did not have a place in his country, noting that they already have a strong taxi system. The rub? Erdogan is up for reelection this month, and we all know what Uber money can do. For now, Uber is on ice.
Source: Reuters Summer Reading:
Looking for a good book or two for those poolside or shore moments? We’ve got you covered.
• If you’re looking to better understand the tech culture, especially within the parameters of Silicon Valley try Bad Blood by John Carreyrou or Brotopia by Emily Chang.
•If you want to try something radical within your company, pick up Ray Dalio’s Principles or Applied Empathy by Michael Ventura.
•Do you need a little push because you’re in a slump or feeling mid-lifey? Try The Outsiders: Eight U­nconventional CEOs and Their Radically Rational Blueprint for Success by William Thorndike.
•If you’re contemplating your business’ place in the technological future (we are, too), pick up Machine, Platform, Crowd: Harnessing Our Digital Future by Andrew McAfee and Erik Brynjolfsson.
•Need some team building? Two good reads are The Captain Class by Sam Walker and Dream Teams by Shane Snow.
• Want to know what Microsoft CEO Bill Gates is perusing this summer? According to Fast Company, his list includes a biography called Leonardo Da Vinci by Walter Issacson, Everything Happens for a Reason and Other Lies I’ve Loved by Kate Bowler, a fictional ghost story about our 16th president called Lincoln in the Bardo by George Saunders, a tome about the world around us in Origin Story: A Big History of Everything by David Christian, and something to inspire change-makers with Factfulness by Hans Rosling.
•Just looking for some goofy fun and to pine for the days where comedy was defined by Chevy Chase, Bill Murray, Harold Ramis, and Rodney Dangerfield? Check out Caddyshack: The Making of a Hollywood Cinderella Story by Chris Nashawaty.
Source: Inc., Fast Company, Business Insider, Financial Times, and The New York Times Five in Five Months:
In a sad and sobering statistic, five New York taxi drivers have committed suicide in as many months, and most families have cited medallion prices and price competition as factors. In a once heavily regulated and tightly controlled market—which Uber has called “rigged” and “manipulated”—a taxi medallion was a safe and smart investment for lower-skilled and often immigrant drivers to gain lawful employment, who could then lease it once they moved into a better-paying job, and finally sell it as a retirement nest egg several decades later. However, it was this stable market and lack of competition that make the industry complacent—which allowed TNCs to gain public support with cleaner, cheaper cars that went to all of the boroughs. Corruption and mob ties have also plagued taxis, eroding public trust. Medallion prices were at an all-time high back in 2013, but have since plummeted 90 percent or more, according to some reports. Worse, drivers stuck with medallion payments have been dealt a double whammy: Extreme competition from TNCs and a deflated market where financing has all but dried up for once coveted medallions. Uber also topped the state’s lobbying efforts in 2017—more than $1.8 million was spent by the company to help it break into Upstate New York, which passed in April of this year. Bhairavi Desai, executive director of the New York Taxi Workers Alliance, recently said that drivers are working upwards of 14 hours per day and still facing poverty and hunger—and TNC drivers aren’t faring much better, where both are literally fighting for each other’s scraps. Said writer Reihan Salam in The Atlantic: “We badly want to believe that we still live in a non-zero-sum nation, in which good-paying jobs for low-skill workers are abundant, and opportunities for advancement are always just around the corner. Instead we have taxi drivers who are being driven to suicide because they can’t bear the competition from slightly more desperate people who want the little that they now have.” It’s a tough juxtaposition in a city that has the country’s largest concentration of millionaires and billionaires and those who are fighting for a ­sliver of the American Dream.
Source: a.m. New York, New York Times, The Atlantic 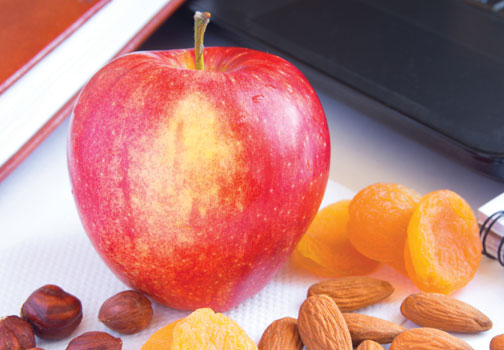 Making Travel Healthy:
A recent study published in the Journal of Occupational and Environmental Medicine has the travel world in a tizzy. Some of the report’s most damning takeaways: Traveling for business more than half of the month can lead to higher rates of anxiety, poor quality sleep, higher cholesterol, and obesity than peers who travel just one to five times per month. Since face-to-face meetings are still some of the best ways to forge lasting relationships, corporate travel managers (CTMs) are focusing on the health and well-being of their executives more than ever. How can you help? First, find out if the company has a wellness plan or offers education. Ask your affiliates for suggestions on local healthy eating as well as hotels that have better-than-average fitness facilities and offer above-average morning/evening food options, and pass those suggestions to the CTM. There are numerous food delivery apps that will make quick, light meals for any palate or food preference easily accessible to their accommodations. When in doubt, ask what you can do to assist. It won’t take long, and going above and beyond for your important corporate travelers will likely pay out when it’s time to renew the contract.
Source: Business Travel News, Inc.    [CD0618]