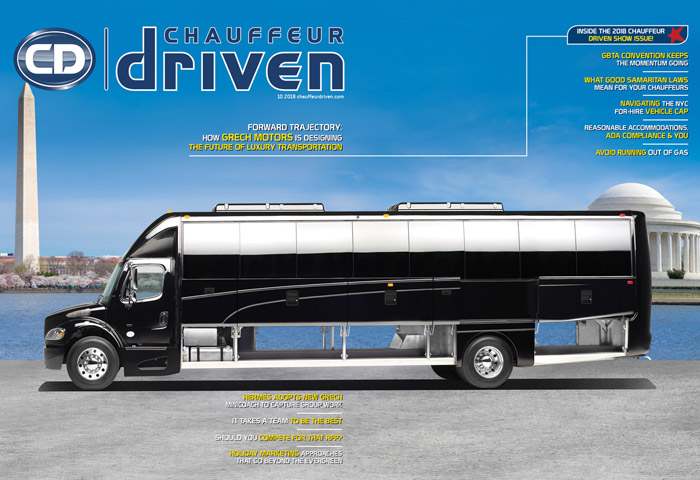 Cover Art: Grech Motors’ newest release, the EG40 minicoach, which has underbelly storage and seats up to 39 (with lavatory). Photography by Lyle Okihara of Lyle Okihara Photography. When Steve Jobs returned to the helm of Apple in 1997, one of the first things he did was review its bloated product line. He made the bold decision to slash nearly 70 percent of its lineup in favor of producing just a handful of items, which allowed Apple to place a greater emphasis on quality and innovation while giving its team a chance to develop real mastery in their work. This strategy allowed Apple to create world-changing technology such as the iPod and iPhone—and helped it become the world’s first trillion-dollar company.

"As the chauffeured transportation industry finds itself serving a bigger portion of the group travel market, luxury coachbuilder Grech Motors sets its sights on developing innovative bus models for years to come."

In similar fashion, coachbuilding visionary Ed Grech—founder and CEO of Grech Motors—made a key decision to trim a product line that included every type of luxury commercial and specialty vehicle to instead concentrate on larger equipment, such as Sprinter vans and minicoaches. This strategy gave Grech Motors a laser-sharp focus on the design, development, and production of its buses and Sprinters, which he says has been vital in the rise to the top of the coachbuilding world. 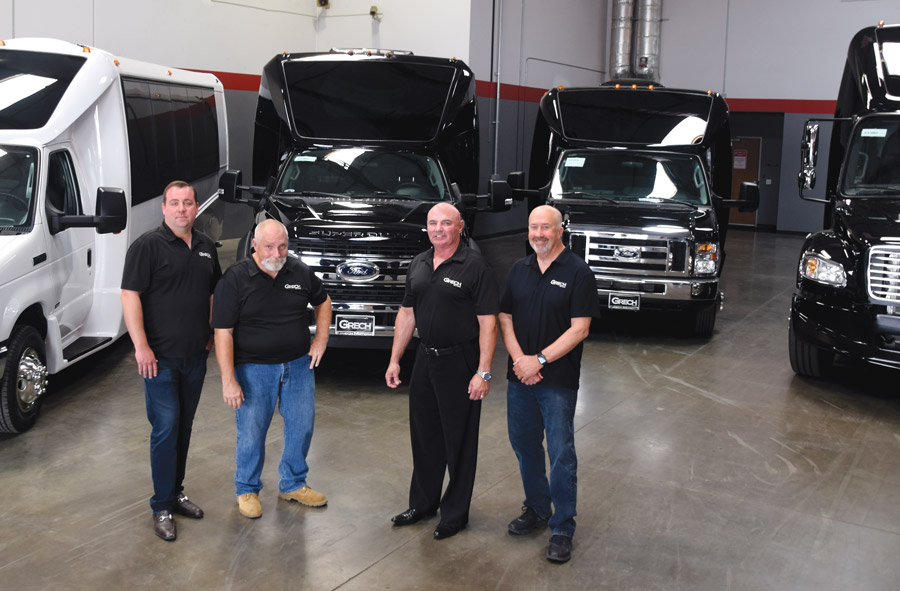 L to R: VP of Sales & Marketing AJ Thurber, industry veteran and new member of the engineering team Carter Read, CEO Ed Grech, and VP of Operations John Beck Shifting Tides
Grech’s pivot was not an arbitrary decision: It was influenced by a bigger shift starting to take hold in luxury ground transportation.

Ten years ago, well before TNCs entered the scene, this industry faced an economic recession that proved to be one of the greatest threats to its existence. Businesses of all sizes were forced to find ways to save money and cut costs, and the first things to go were luxury services. Corporate travel managers and meeting planners still needed to transport people, but they had to look for ways that were more efficient, cost-effective, and less flashy than limousine service. At the same time, operators fought to find ways to serve the changing needs of their clients and stay in business. Larger equipment, such as vans, minibuses, and motorcoaches, seemed to be the solution to both sides of this challenge.

Grech, realizing this trend would only continue to grow, saw an opening in the market. While motorcoach companies have been around and perfecting their products for decades, the minibus and Sprinter van niche was relatively new and suffered from what he saw as inconsistent quality across numerous manufacturers. Grech and his team not only were pioneers in building luxury shuttle buses, but also had invested heavily in a state-of-the-art production facility that systematized the manufacturing process to maximize consistency and quality control.

“Standardizing everything makes a huge difference on production, purchasing, inventory, and quality control,” says David Reagan, head of research and development. “It really makes the end product much better. It not only streamlines the production process but also lets the customer easily find replacement parts later on.”

Constraints Drive Successful Innovation
By working on a more concentrated product line, Grech says he has been able to achieve a level of quality and innovation that would be difficult for a company whose resources are spread more thinly. Instead of trying to diversify its vehicle types, the luxury coachbuilder can continue to further refine its Sprinter and bus models, producing groundbreaking and aesthetically pleasing vehicles that help operators both better serve their clients in the lucrative group travel market and compete successfully for that work with the vehicles their customers want.

The EG40, Grech’s newest minicoach that features underbelly
storage like a full-size coach “My philosophy in business is very simple,” Grech says. “I have always focused on delivering the highest quality products and providing unparalleled after-sale support. As the ground transportation landscape shifted more toward buses and Sprinters, I saw a lot of untapped potential and opportunity for operators, and Grech Motors is here to give them the equipment they need to really make a splash to the group travel market.”

Maintaining a focused lineup, however, does not mean that Grech Motors’ offerings are limited: On the contrary, the coachbuilder produces a range of vehicles that can accommodate from 13 passengers in its Sprinter to 44 passengers in its largest Freightliner—and everything in between.

Its models continue to evolve with the industry and are often inspired by customers. Just a few years ago, Grech Motors unveiled its 23-passenger GM28 minibus, built on the Ford E-450 chassis. This model was created in direct response to customer demand.

“At the time [of the GM28’s release], a lot of our clients were looking for a smaller bus and the GM28 works for those who have smaller groups,” says VP of Sales and Marketing AJ Thurber. “We were able to create something for them that has the hallmark Grech quality with significantly more standard features than competitors’ buses, at a very attractive price.” 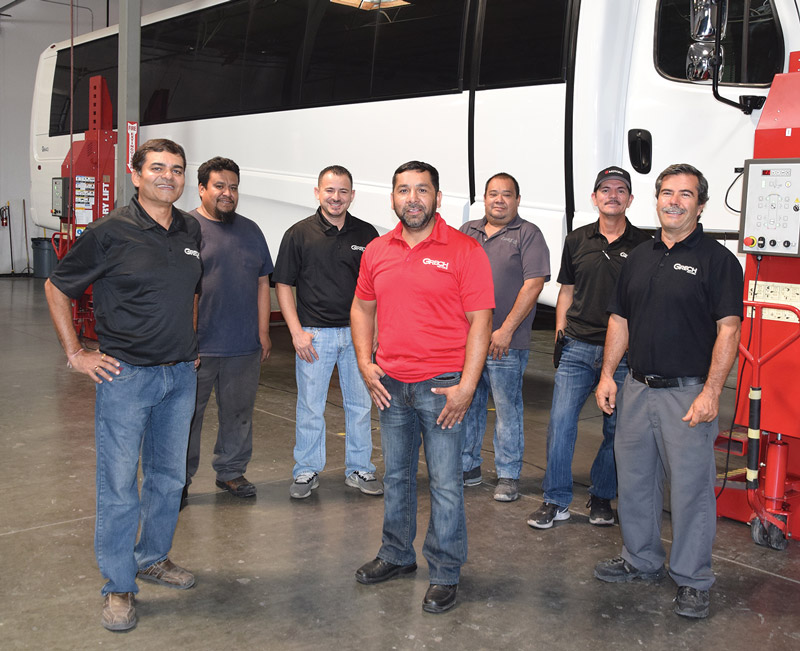 Assistant Production Manager Gerardo Flores (center) with members of the production team (L to R): Quality ­Assurance Manager Johnny Thaker, Lead Mechanic Mario Reyes, Electrician & Technical Support Salomon Estrada, Painter Juan Rodriguez, Trimmer Ismael Sanchez, and Lead Electrician Tony Hernandez A streamlined and agile production line has ancillary benefits, too. When a new OEM chassis is released, it requires a lot of work for coachbuilders to recalibrate their engineering to meet the new specifications. Because the Grech Motors R&D team is focused on buses, they were able to work with Ford engineers from the moment the new chassis was announced. Its GM33 model was first in the industry to debut the new redesigned F-550 chassis.

The coachbuilder’s latest and most innovative design yet is its newest release, the EG40 minicoach. It is the industry’s first unibody Freightliner minicoach with full pass-through underbelly luggage space among other cutting-edge features. Grech’s new flagship model gives operators the luxury, quality, and curb appeal they have come to expect with the added functionality of an over-the-road coach.

“The EG40 is a great vehicle and it really bridges the gap between a small minicoach and large motorcoach, which creates so much flexibility for operators and allows you to serve both large and small groups,” says Jorge Sanchez, CEO of Denver-based Hermes Worldwide Transportation, who was the first operator to add EG40 minicoaches to his fleet. (For a more in-depth look at how Sanchez is using his new buses, turn to page 62.) 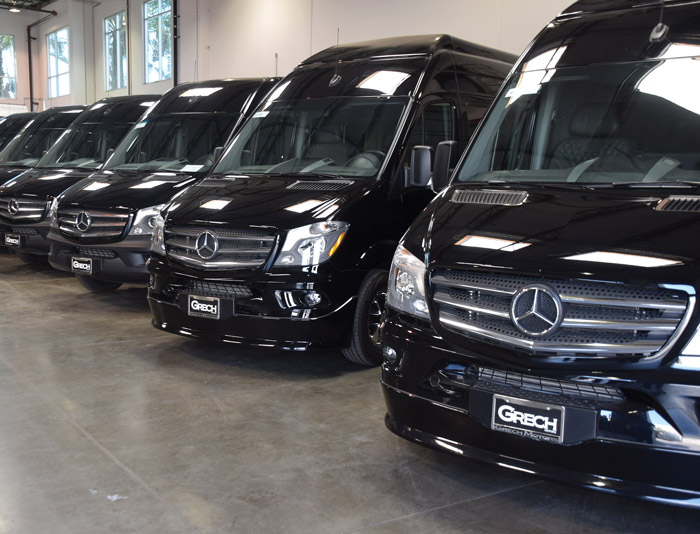 The Grech lineup includes the popular Sprinter shuttle and limo vans While the EG40 is Grech Motors’ latest innovation on the larger end of the spectrum, the coachbuilder is currently developing another new vehicle for the smaller bus market: the GM24.

The GM24 will have the same equipment as the GM28, and built on the same Ford E-450 chassis with a V10 gasoline engine, but will be only 24 feet in length. It will also seat 14 passengers with rear luggage, which is under the Federal DOT capacity of 15 passengers, making it a suitable minibus for operators looking to move smaller groups.

The GM24 will debut at the 2018 Chauffeur Driven Show October 7-10 at the Gaylord National Resort & Convention Center, located just outside of Washington, D.C. If you’re reading this magazine at the show, be sure to stop by the Grech Motors booth (#420) to see the vehicle in person. 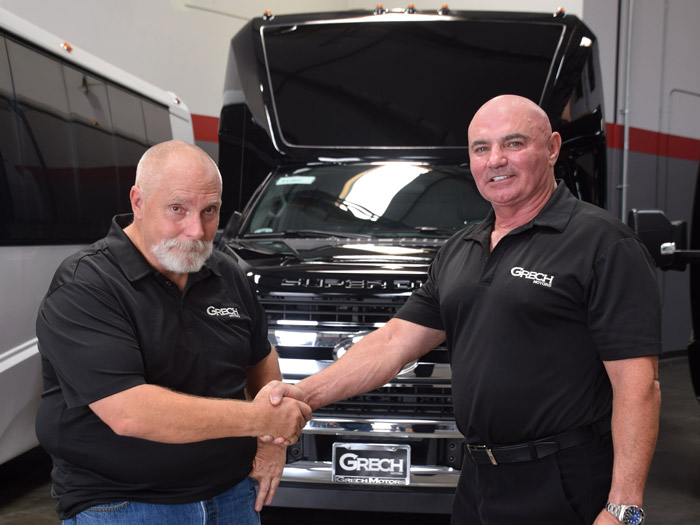 Ed Grech (right) recently welcomed accomplished bus engineer Carter Read to the company Continued Investment in Improvement
The product line and passenger counts aren’t the only things expanding at Grech Motors. Being on the forefront of a constantly evolving industry and regularly breaking new ground requires a team that is equally up to the task. The coachbuilder recently doubled down on its commitment to continue developing a leading bus line by adding industry veteran Carter Read to the manufacturing team.

Read is an accomplished engineer who brings many years of bus manufacturing experience to Grech Motors. He received his engineering education at Cal Poly Pomona and Lehigh University, and holds certifications from the Society of Manufacturing Engineers.

Read will work with David Reagan and Luis Alvarez—two similarly seasoned professionals at Grech Motors—and wields a wealth of knowledge and experience to assist with product development, manufacturing efficiency, and production coordination.

“Carter has a great reputation for being one of the best in the industry, and it is an honor to have him on the Grech Motors team,” Thurber says. “His expertise will ensure Grech Motors sustains forward momentum and continues to develop the highest quality products in the industry.”