Cover Story: L.A. West: Back in the Saddle 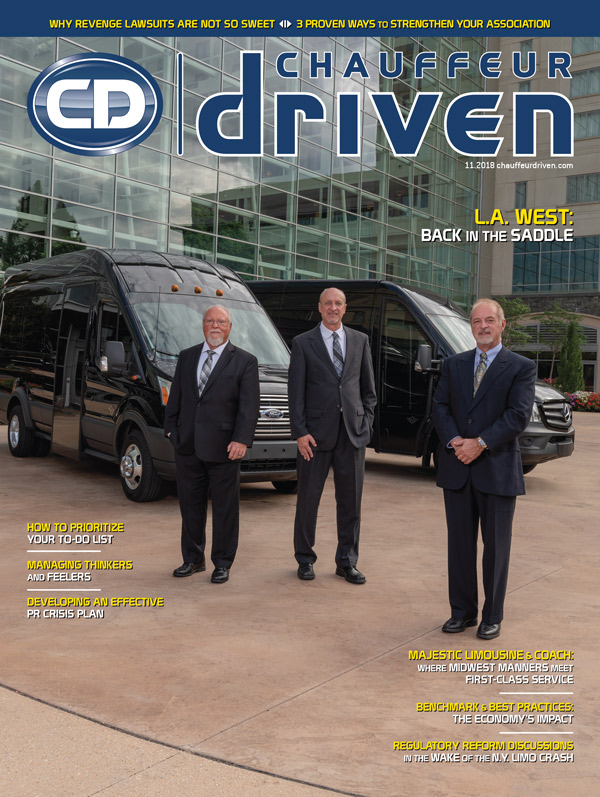 Cover Art: The L.A. West executive team (L to R): Regional Sales Manager Steve Wray, Vice President of Sales Kevin Kropf, and President & CEO Vern Kauffman at the Gaylord National after this year’s CD Show. Photography by Andrew Schneps of Back Bay Photography. L.A. West President & CEO Vern Kauffman was not suited for retirement. After selling L.A. West to a venture capitalist firm in 2005, the veteran vehicle builder looked forward to some time away from the day-in, day-out hustle and bustle, but, as is so common with the die-hard gearheads who make up the industry, the lure of the assembly line was too much for Kauffman to ignore.

“I was semi-retired for about 7 years, but was recruited by a headhunter to get back in the industry,” admits Kauffman. “I took on that challenge, and was recruited again in 2015 at McSweeney Designs in Birmingham, Ala. Ultimately, that turned into an acquisition [once they decided to exit the Sprinter sector]. My thought process was, ‘as long as I’m engaged in the industry, and in charge of the day-to-day operations, I might as well be back in the saddle in an ownership role.’ This time I’m in the right place; I’m where I’m supposed to be.”

After Kauffman acquired the McSweeney’s luxury ground transportation inventory, equipment, engineering rights, and warranties, he relocated the operation from Birmingham to his home base of Statesville, N.C. The easy part of this new venture was the branding. With the VC firm that acquired L.A. West long out of the biz, it made sense for Kauffman to resurrect the name he was most associated with.

“When the name became available again, I thought it might be a good time—if for nothing other than sentimental value—to bring the brand back,” Kauffman says. 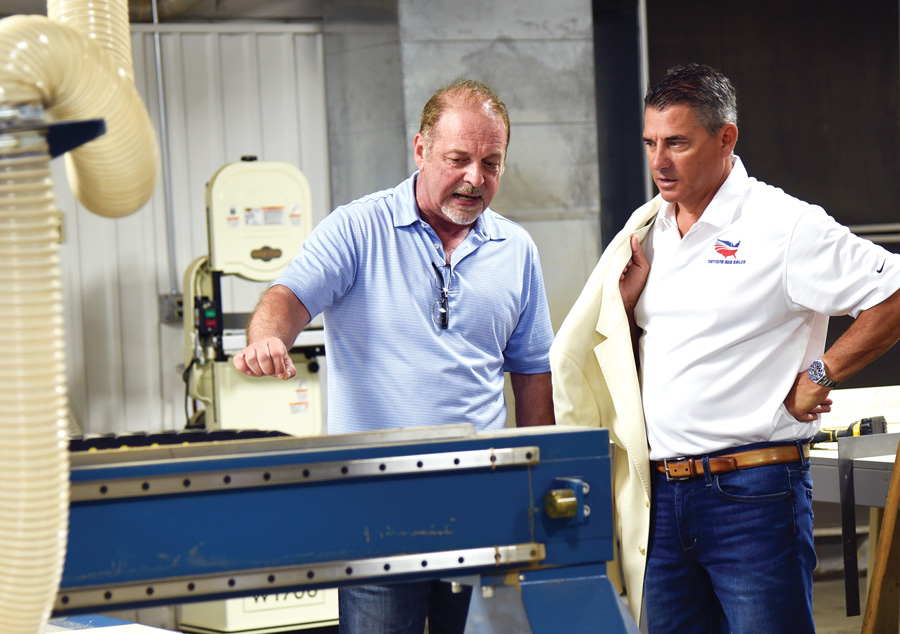 L.A. West President & CEO Vern Kauffman (left) and Nations Bus Sales CEO Chip Osbourne discussing technology in today’s manufacturing environment Since the reboot, L.A. West has seen a tremendous amount of growth. In May, the builder rolled out its first Sprinter from the Statesville production facility, and has subsequently increased production, delivering high-end vehicles to its dealer network across the United States.

“We’ve been steadily ramping up month over month,” says Kauffman. “We’re continuing to add personnel, and training our team as production rises.”

He adds that the availability of Sprinter chassis—or lack thereof—has been the barometer of what L.A. West’s production numbers are on a monthly basis; however, Kauffman sees this as advantageous, as it’s allowed the company to solidify its processes and procedures, and then prep its staff, which now numbers 20. Moreover, this gives Kauffman the opportunity to have a strong foundation in place to capitalize on the redesigned 2019 Mercedes-Benz Sprinter.

"At the end of the day, our mantra is to be best in class, whether it’s the best product quality, the best value proposition, or the best reputation." -Vern Kauffman, ­President & CEO of L.A. West 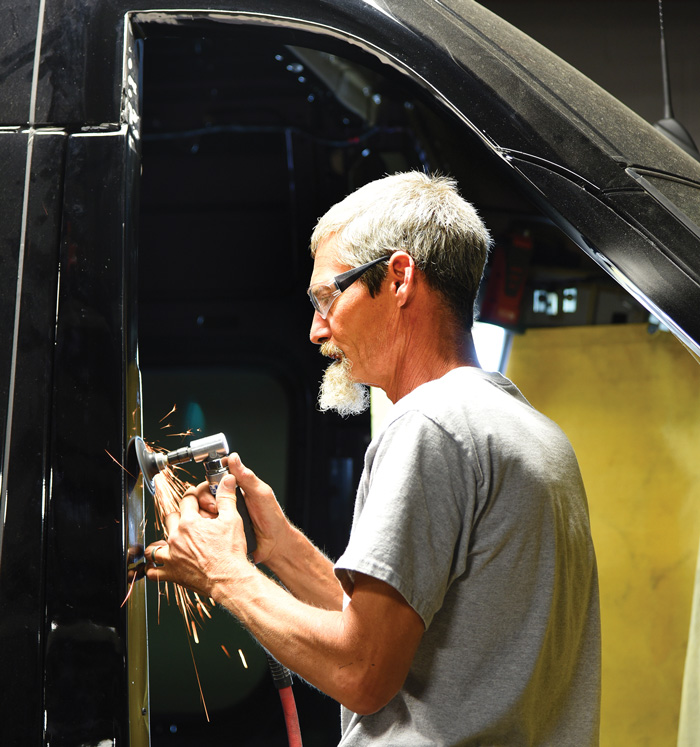 Production Manager Mark Birch demonstrates fabrication techniques Recently, L.A. West introduced the Ford Transit to its lineup, its second model offered to dealers. Kauffman says that it has taken some time in terms of product development and engineering, as well as setting up the production processes. However, largely because of the reputation of L.A. West’s vehicles—and its leadership, for that matter—the builder already has a good backlog of orders for the Transit, which are starting to roll off the line now.

Regarding that reputation: From the first iteration of L.A. West through Kauffman’s time with McSweeney to today, Kauffman says that the company and its vehicles are consistently regarded among the best that the industry has to offer.

“At the end of the day, our mantra is to be best in class, whether it’s the best product quality, the best value proposition, or the best reputation,” says Kauffman. “We strive for this in everything we do. We’ve established a niche for ourselves in terms of what we’re really good at producing. And we take that process and continually refine it: We look at the cost of materials, components, and labor. By producing vehicles in a repetitive process, it allows our labor cost to be lower. The operator is the beneficiary of having a value-packed vehicle.” 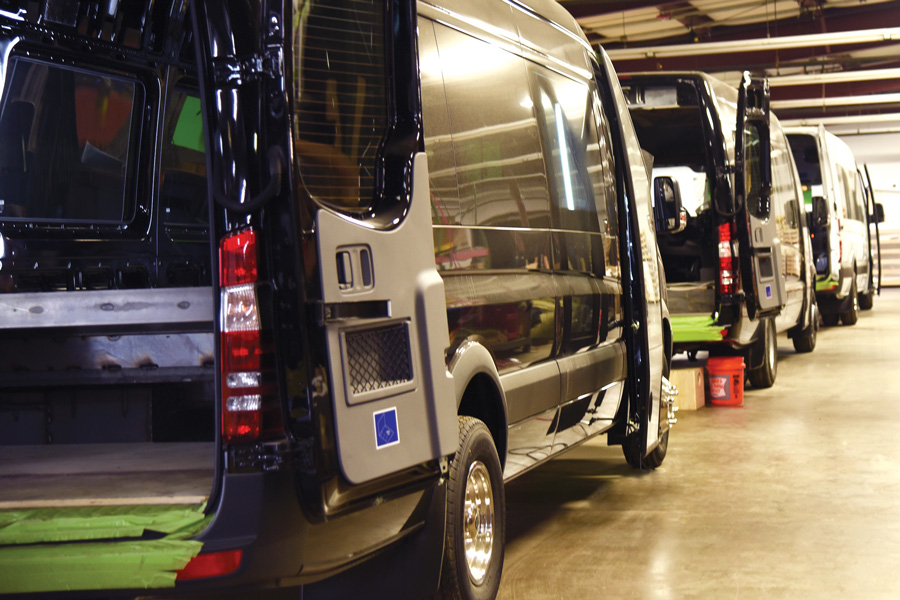 Interior assembly stations on the L.A. West production line Kauffman cites the quality of the build, the quiet drive, and custom configurations of the vans as what sets L.A. West apart.

“We’re maybe not the least expensive on the market, and certainly not the most expensive, but in terms of value for the dollar, I don’t think anyone can compete with us.”

Moreover, he believes that a good deal of L.A. West’s appeal is largely due to its pioneering vehicle design, which includes stadium seating and European portal doors.

“We largely cater to upscale properties and tour operators. They are particularly drawn to our stadium-seating option, which allows for the largest luggage storage capacity in the industry. We can comfortably transport 14 people and a driver, with a luggage space that can more than adequately accommodate those passengers.”

However, it could be said that L.A. West’s true calling card is the European portal door configuration included in the majority of the company’s Sprinters and, now, Transits. Innovated for use in vans by Kauffman during his time in the industry, this sophisticated entry system not only gives the vehicle a distinctive, slick appearance, but also is advantageous for chauffeurs and passengers.

“The European portal doors are a huge benefit to customers,” says Chris Clark, commercial sales manager of Transportation South in Birmingham, Ala. “They look 10 times better with a modern, up-to-date feel, and chauffeurs don’t have to get out at every stop to open a sliding door to let people in. Also, the keyless entry lets the chauffeur open the door so passengers can enter while their luggage is being loaded in.” 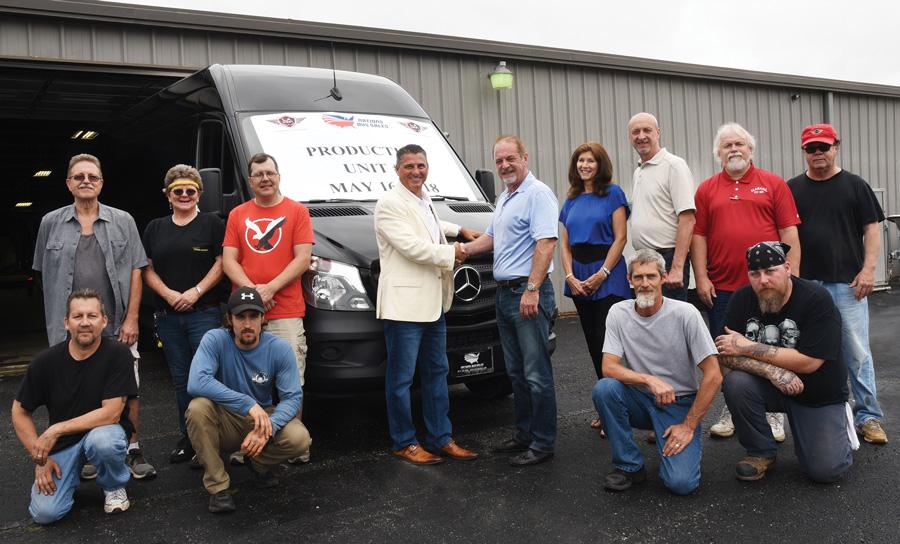 The L.A. West production crew celebrates the first completed vehicle rolling off the Statesville assembly line with Chip Osborne of Nations Bus Sales (center, white jacket) “Our livery clients are huge fans of these vehicles. Once they buy one, they always come back. We’ve had very few warranty claims, and have been consistently impressed with the craftsmanship. In fact, most of the operators have multiple L.A. West vehicles, often in multiple seating configurations.”

This sentiment is echoed on the other side of the country by Chip Osborne, CEO of Nations Bus Sales with locations in Inglewood, Calif., and St. Augustine, Fla. Nations Bus Sales is not only L.A. West’s number-one volume dealer, but also the first to place an order when Kauffman decided to revive the brand. Osborne was present when the first Sprinter came off the line, post-reboot.

“Vern brings comfort, quality, and craftsmanship to the livery industry,” Osborne says. “He builds vehicles paying careful consideration to an operator’s standpoint. To this day, our staff is blown away by L.A. West’s vehicles. It’s the one brand that they want to check out the minute a new bus comes on the lot.”

Recently, Kauffman took the opportunity to display the company’s product at the Chauffeur Driven Show in National Harbor, just outside of Washington, D.C. alongside his longtime associates and key personnel Vice President of Sales Kevin Kropf and Eastern Regional Sales Manager Steve Wray.

“We had a very positive response in National Harbor,” Kauffman raves. “In fact, it was one of the best shows I’ve ever participated in. We typically had folks in our vehicles who wanted to learn about them long after the show floor had closed. We were very pleased with the level of interest and the number of people who came by to take the time to learn about the features and benefits that our vehicles offer. We’re still following up on business weeks after the show.” 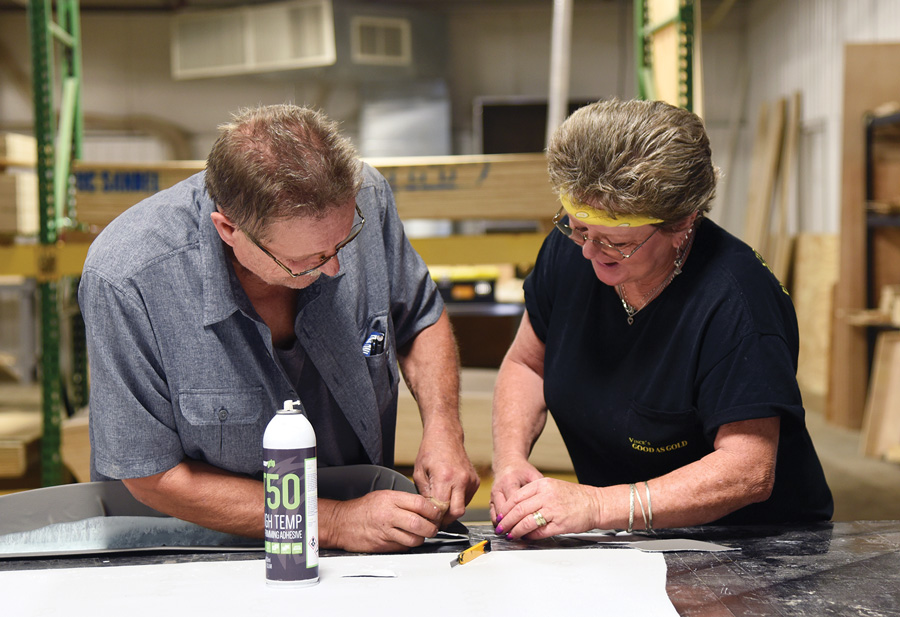 L.A. West team members upholstering interior panels Since its return to the industry, L.A. West has seen an impressive amount of customer loyalty, with 100-percent of former McSweeney Designs dealers staying on board after Kauffman took the reins. But that’s only part of the reward he’s received since returning to the industry.

“It’s really about the daily challenges,” he says. “I enjoy seeing people succeed. Assembling a team of individuals and then creating an organization from that—that is powerful. The challenge of the moving parts: sales, design, engineering, production, or working with an OEM. There are so many facets of the business that are interesting or interconnected. When I was out of the industry, I missed that challenge and interaction. That interaction is the key element I thrive on.”   [CD1118]