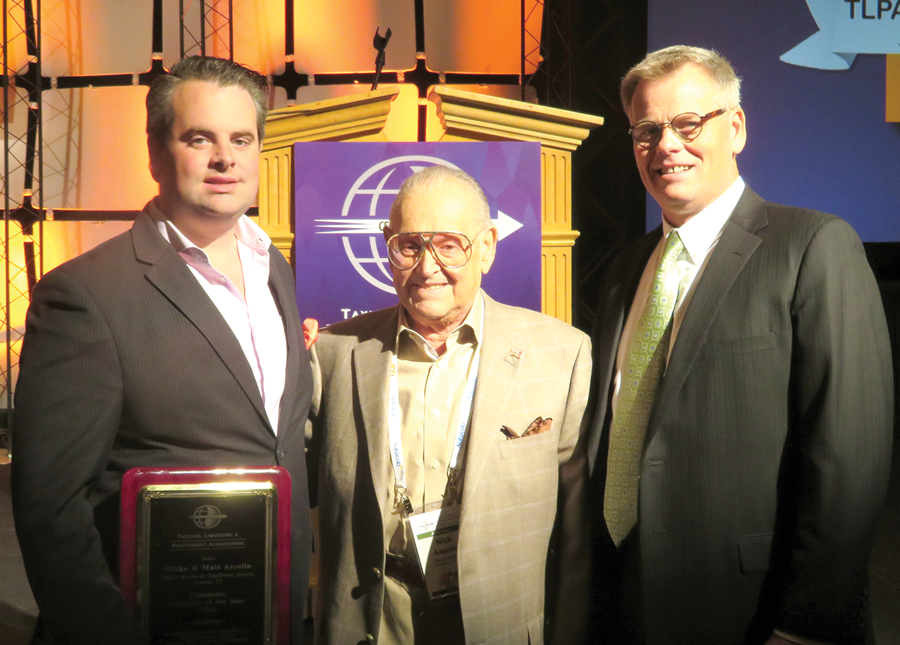 Outgoing TLPA President Mike Pinckard (right) with Matt (left) and Nikko Assolin of Nikko’s Worldwide Chauffeured Services, who were named TLPA’s Limousine & Sedan Operator of the Year for 2018 What started as a local whim has turned into a national win.

After moving from New York to Houston, Nikko Assolin opened a small limousine company in 1982, a move his son, Matt, said was “sort of on a whim.” But that move paid off—and in October, Nikko’s Worldwide Chauffeured Services was named the Limousine & Sedan Operator of the Year by the Taxicab, Limousine & Paratransit Association (TLPA).

The international trade association, the oldest and largest of its kind in the world, honored both Nikko and Matt, who joined his father’s company in 2008.

The company, now a 50-vehicle operation with fleets in Houston and Austin, provides services to customers who have included major entertainers, politicians, and sports figures for the past 25 years.

“The Assolin family has built a remarkable company with some of the best customer service in the business, supported by excellent technology,” said TLPA CEO Al LaGasse. “Equally exemplary is their commitment to serving our industry through numerous volunteer efforts that help other fleets deliver the very best service.” 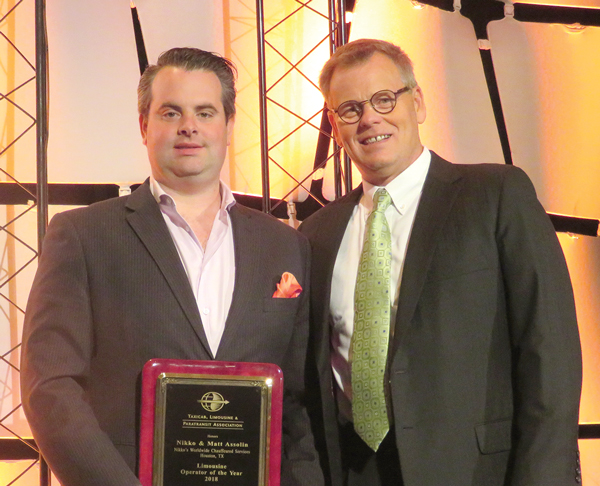 Matt Assolin (left) and Mike Pinckard with the Assolins’ Limousine & Sedan Operator of the Year award Father and son accepted their award in front of hundreds of industry professionals on Oct. 28 at Caesars Palace in Las Vegas.

The honorees also include Grigory Eskin, the 71-year-old whom TLPA recognized as 2018’s Limousine & Sedan Chauffeur of the Year.

When Eskin and his wife, Rachel, left Lithuania in 1980, their goal was to give their six-year-old son a better education. Eskin spoke six languages, but not English, and he had $316 to his name. But he knew a better future awaited. He worked hard and learned quickly, moving from his first job as a taxi driver to being a chauffeur with Vital Transportation of New York City in just three years.

Four decades later, Eskin is still with the same company.

“Vital is my company; it is my family,” Eskin said. “Everything I have in life is because of Vital. If you are a hard-working person and you are willing to get something, you’re always going to get it. My main goal was to give my kids the best education. And I did.”

Berj Haroutunian, president of Vital Transportation, said it is Eskin’s strong work ethic, superb driving record, and attention to detail that make him so deserving of the award. He noted that Eskin has even been honored in the past by New York City officials for not receiving a single ticket in a year, a rare achievement in such a congested metropolis.

“Grigory is one of a kind,” Haroutunian said. “I wish everyone was like him.” He noted that Eskin was with the company when it was just a 10-car fleet. It now has more than 450 vehicles. 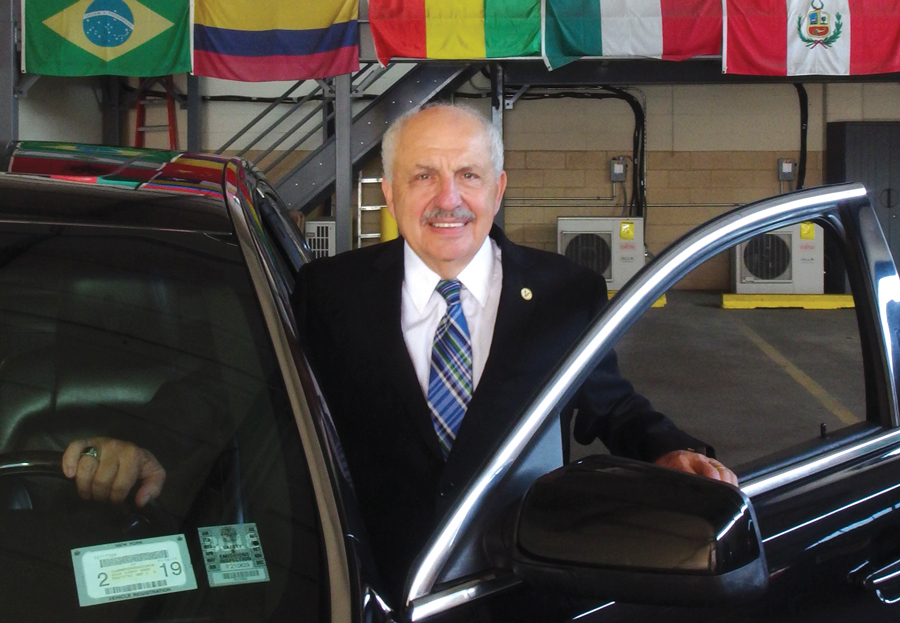 TLPA has recognized Grigory Eskin as 2018’s Limousine & Sedan Chauffeur of the Year Rounding out this year’s slate of winners are:

Robert DeLucia of Star Transportation and VETaxi of Pittsburgh: Taxicab Operator of the Year

Anthony Sims of Checker Cab of Atlanta: Taxicab Driver of the Year

Myron Hubbard of SCR Medical Transportation of Chicago: Paratransit & Contracting Driver of the Year “These award winners lead by example, and demonstrate every day their commitment to the highest quality customer service, as well as their leadership within their communities,” said LaGasse.

TLPA held its 100th Annual Convention & Trade Show in Las Vegas from October 27-29, which will be covered in an upcoming issue of Chauffeur Driven.