UMA Expo Sets a Course for the Future 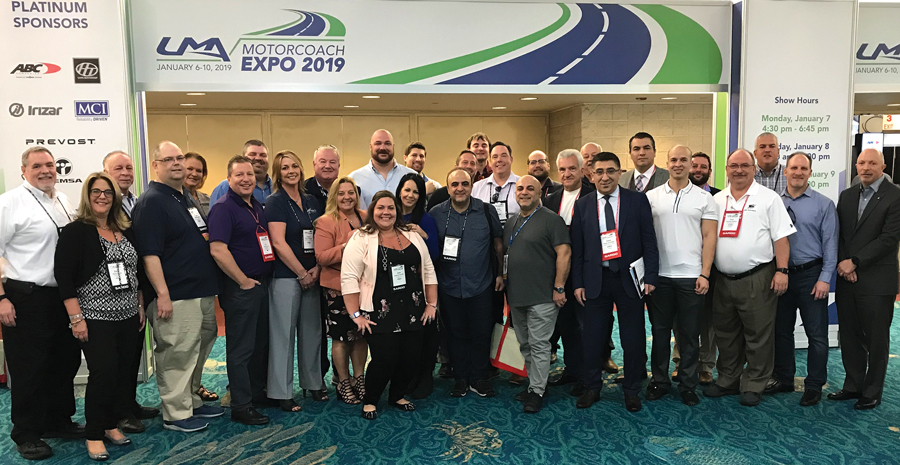 As the chauffeured ground transportation industry not only gets more involved with the bus and motorcoach world but also looks to work more closely with vertical markets, operators and vendors alike have many reasons for finding value in attending the expo.

"There are so many changes in our industry today that if we don’t step up and get involved in providing more bus services, we will be left behind. Attending the UMA was a great way to see what the motorcoach companies are doing, and what they had to offer that we can learn from.” - Renee Ferraro of ZBest Worldwide Chauffeured Transportation Services in Baltimore, Md. 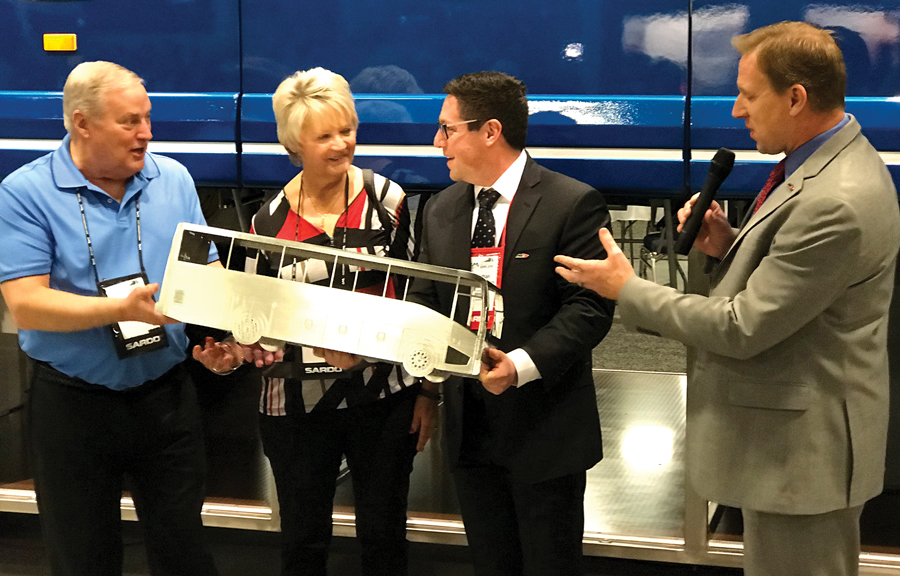 Members of the ABC team during the company’s press session “Why should a limousine operator attend the UMA Expo? We have lots to learn—operationally—from our brothers and sisters on the motorcoach side of transportation,” says Eric Devlin of Premier Transportation Services in Dallas, Texas. “Our team found the traditional motorcoach operators to be very open, honest, and helpful as we navigate through the charter bus side of the equation. UMA, much like our industry’s conferences, provides valuable learning opportunities from some of the smartest men and women in the industry. As always, networking is the name of the game when trying to grow your business and learn from the best.”

“It was exciting to attend the UMA Expo for my first time—go figure after 33 years in the tran sportation industry,” adds Arthur Messina of Create-A-Card in Smithtown, N.Y. “It was also refreshing to see new faces and meet with companies that were excited about the services we offer. It seemed that UMA was very product-related, but there weren’t many vendors promoting marketing services and promotional products—so we’ll be in Nashville next year!”

The event brought together the industry’s many operators, vendors, supporters, and associations for an event that aimed to innovate, educate, and celebrate.

Innovate
The show floor is traditionally a sprawling showcase of the latest and greatest services, products, and vehicles available to the industry, and this year was no exception. Several leading vehicle suppliers brought their newest motorcoaches and buses to the event—or spoke of their plans to do so in the future. 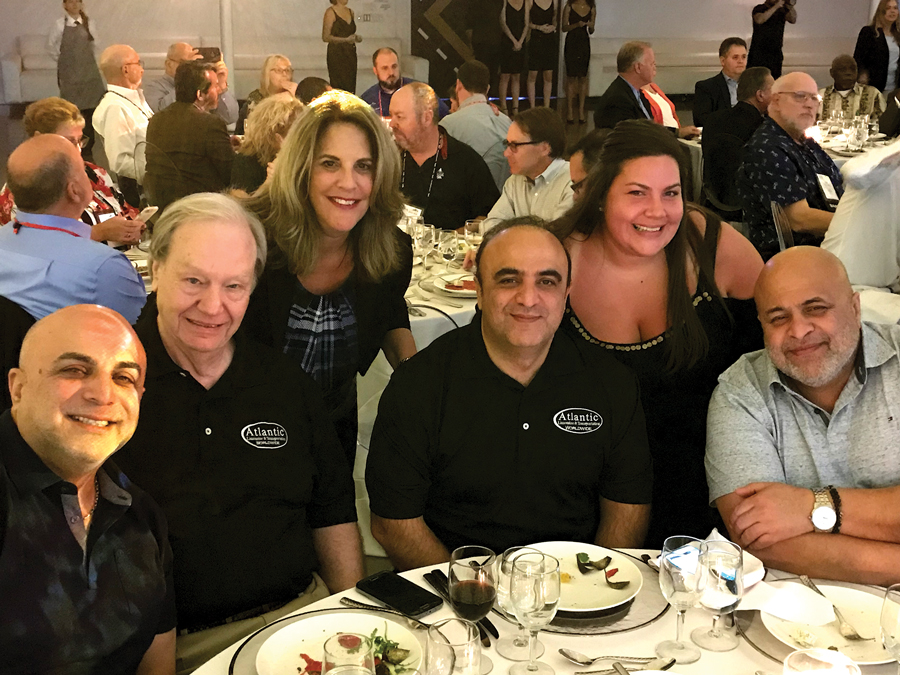 "This was my first time attending a UMA Expo and I was pleasantly ­surprised by the amount of information it provided, whether it was the educational seminars or the show floor and each of the exhibitors—as well as the plethora of buses. It was reinvigorating to see so many livery operators in attendance, as well!” - Tracy Raimer of Windy City Limousine & Bus in Chicago, Ill.

Many companies announced new and upcoming products and initiatives at the expo. MCI sees its new D45 CRT LE as a game-changer for offering elements like a design that was influenced by feedback from disability advocacy groups, and is also developing new high-floor D models with demos planned for later this year. And ABC Companies is focusing on electrification, as an electric version of the Van Hool CX45E, in collaboration with Proterra, is expected to debut in the U.S. by the fourth quarter. ABC will roll out a new telematics program—ABC Connect—later this year, which will provide data and information across multiple aspects of fleet operations. Prevost showcased a new custom-seating option for its H3-45 bus, while its big reveal was a freshly restyled X3-45. And on the show floor, Temsa announced its new North America subsidiary to work directly with operators, and will be opening up four dedicated service centers throughout the U.S. in Q1. 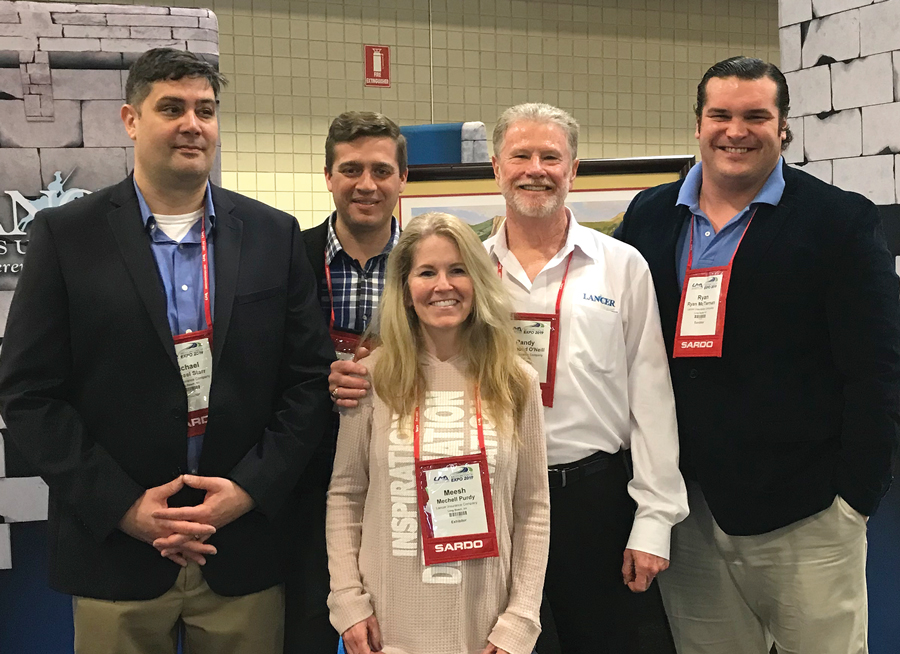 UMA President/CEO Stacy Tetschner, along with COO Ken Presley and the association’s lobbyist Becky Weber of Prime Policy, discussed how quiet the last two years have been in the industry as the Administration squashed several proposed regulations, including raising insurance premiums and mandatory obstructive sleep apnea testing.

They also discussed how the level of new entrants is again increasing after being down for several years. However, Presley and Weber warned that with one-third of the incoming Congress being new, the industry would again have to “play more defense” to stop new measures from becoming regulations, including mandatory speed limiters and picking up the fight to increase insurance minimums.

"The UMA show was a great experience. 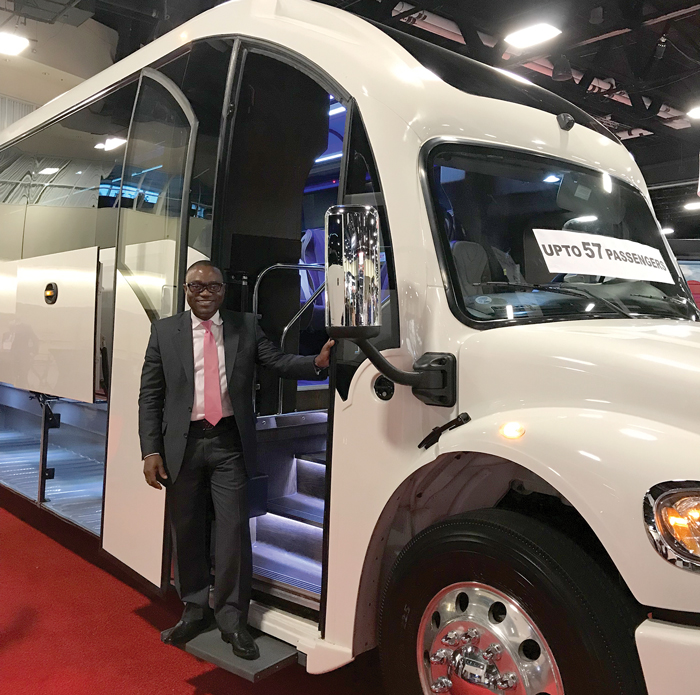 Executive Coach Builders President David Bakare It opens up a new world of possibilities for those of us in the ground transportation business. The amount of equipment and vendors on the show floor was amazing and were staffed with representatives who were very helpful. The added bonus was seeing so many familiar faces of luxury ground transportation operators again and speaking to them about the future of our businesses in this new realm.” - Frank Castro of Alliance Limousine in Ardsley, N.Y.

The driver shortage was discussed during a few lively sessions, including a group session lead by Chris Goebel and another session hosted by Norris Beren of Risk Reward Consulting, which was sponsored by National Interstate Insurance. Of particular note for Beren was that operators have to do the work to make their business attractive to potential drivers during the recruitment process, while remaining nimble to adapt and change things that aren’t working against employee retention. 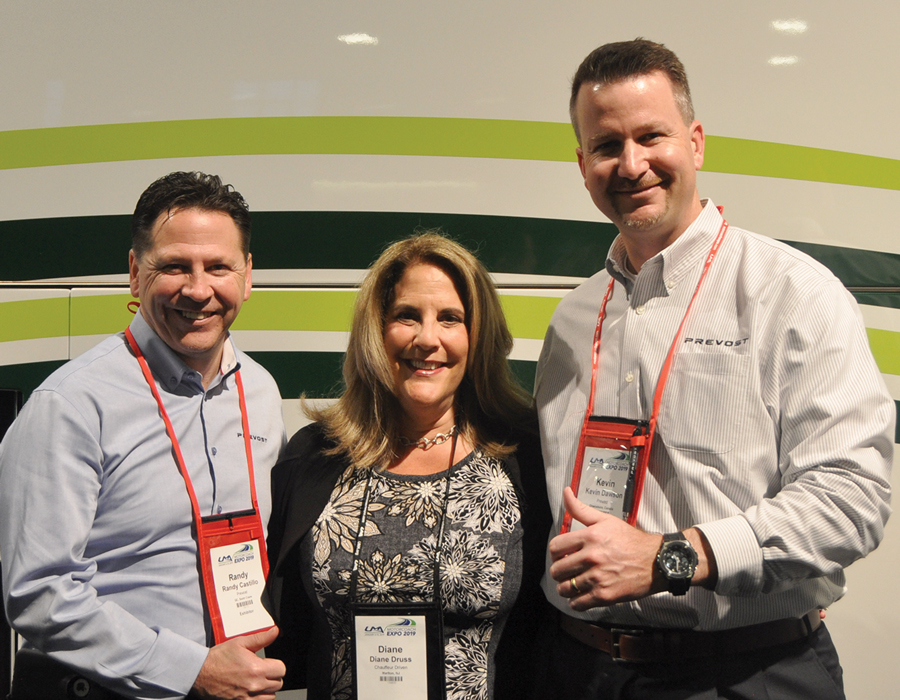 L to R: Randy Castillo of Prevost, Diane Druss of Chauffeur Driven, and Kevin Dawson of Prevost A state association summit and an array of concurrent sessions covering insurance, driver fatigue, ELDs, FMCSA violations, technology, and more provided a well-rounded spate of seminars for attendees of all sizes, experience, and markets.

Celebrate
No industry expo would be complete without some lively after-hours events and oodles of networking opportunities, and UMA attendees took full advantage of the Floridian warmth during the beach party following a sneak-peek preview of the show floor.

The chauffeured ground transportation sector was well-represented, with the Florida Livery Association holding a meeting in conjunction with the expo—and 30 representatives of our industry segment coming together for a photo op organized by Chauffeur Driven outside the expo hall. 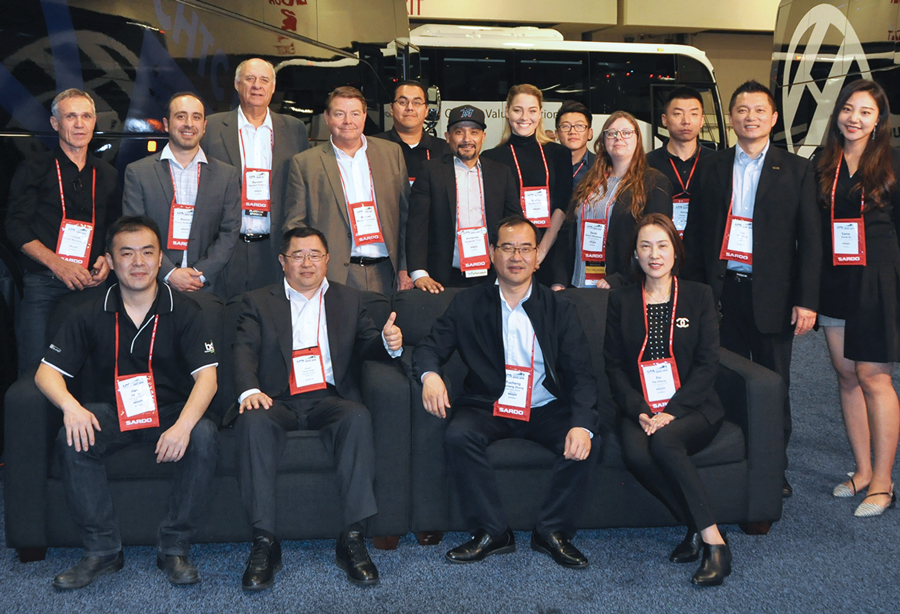 The CHTC team with three of their buses Awards provided an additional dose of celebration, as the driver and mechanics competitions tested competitors’ skills while the UMA Leadership Awards recognized those whose hard work has benefited the industry at large.

Next up for UMA is its annual legislative fly-in, scheduled for April 2 and 3 in Washington, D.C. A record attendance is expected for the event, which unites hundreds of individual representatives from a variety of bus and motorcoach industry groups with the common goal of speaking to members of Congress about how critical it is to protect the industry.