By Chris Hotham and Kato Murray 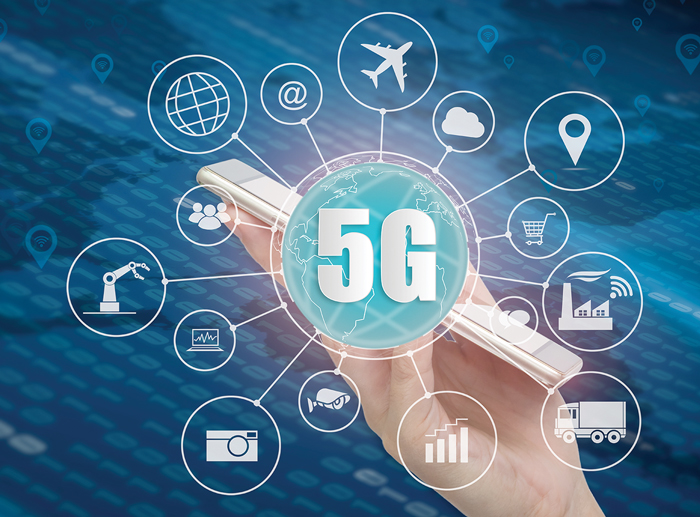 If we look to science fiction as a forecaster of technology’s future, we may get a pretty good idea of what to expect. Star Trek predicted we would be walking around with wearable communicators on our wrists; 2001: A Space Odyssey depicted a future with tablets, video calling, and virtual assistants; and even more recently, Minority Report imagined a society driven by artificial intelligence, data analytics, and touch-screen interfaces.

We may not yet be in the age of flying vehicles or hoverboards like they predicted in Back to the Future II, but there are still some pretty incredible things happening in the world of technology today.

5G Wireless Network
The first cities to see the 5G wireless network rollout included Chicago and Minneapolis back in April, through Verizon’s network. In the following month, Sprint flipped the switch in Houston, Dallas, Atlanta, and Kansas City. This is exciting news, but in order to access the speeds promised by the 5G wireless network, a 5G compatible device is required. Some of the newest models include the Samsung Galaxy S10 5G phone (on Verizon’s network) as well as the Netgear Nighthawk 5G Mobile Hotspot, which is compatible with the AT&T network.

In addition to phones, tablets, and mobile Wi-Fi units, the 5G network is influencing other areas.

• Internet of Things: The IoT is an interconnected network of devices using standardized communication. It is likely that the first IoT protocol to truly rollout on the 5G wireless network will be related to smart cities, and decidedly, the race for the first smart city is well under way. Several companies are not only planning and designing, but also testing and executing some of the initial technology that will be used. Sidewalk Labs has developed plans for a small smart city to be built in an area of Toronto. Design elements include heated pavement that will keep the streets clear for cyclists, pedestrians, and self-driving cars. Service tunnels will stretch below the streets for city maintenance and food delivery. And Wi-Fi will be available citywide. Given that the city will be heavily connected, residents will be subject to monitoring, where sensors will collect data on energy consumption, traffic patterns, and use of public spaces.

"We may not yet be in the age of flying vehicles or hoverboards like they predicted in Back to the Future II, but there are still some pretty incredible things happening in the world of technology today."

• Public Safety: Rescue teams of all kinds will be able to communicate instantaneously, replacing inefficient two-way radio systems or easily dropped 4G signals. This efficiency will give police and first-responder teams the ability to gain situational awareness via high-quality video streaming. In addition, officials will be able to immediately assess and respond to aerial video of wildfires, floods, and disaster zones. Smart communication will allow traffic lights to interconnect and share data, improving not only traffic patterns, but also emergency response time when accidents occur.

• Remote Control for Heavy Machinery: The 5G network will allow remote-controlled industrial construction machines to have improved response times, greater capacity, and a high level of accessibility, which can lead to reduced costs and risk in hazardous environments. Developers are looking to understand how connected machines can bring added value to customers while reducing both costs and work-related injury.

• Health Care: With the advent of tele-health and remote home monitoring systems, patients can receive care from the comfort of their living room at greatly reduced costs. Doctors can now make recommendations after a short video call or review of wearable application data. Health-monitoring applications can track blood pressure, ECG, oxygen levels, bladder function, and blood sugar, while some of the newest devices offer medication reminders and can monitor elderly patients for slips and falls. It is estimated that smart connected medical devices will surpass $158B globally in 2022.

Looking ahead, researchers gathered in March for one of the first global summits to discuss 6G, the successor to 5G and the expected standard by 2030. It is hard to imagine what 6G will be capable of at this stage, but researchers speculate that it will help usher us into the post-smartphone era. Just about everything will be connected.

Autonomous Vehicles and Automotive Technology
Within the ground transportation industry, discussions continue to be focused on the potential of autonomous vehicles. Across the world, car makers are scrambling to be the first company to release a fully adopted autonomous vehicle. For example, Volkswagen and Ford have partnered to invest a collective $7B in Argo AI. Argo AI is a startup currently developing the virtual driver system and high-definition maps that will be used in their self-driving cars. This research will allow these vehicles to know where they are in the world, detect changes in their environment, and make safe and informed “decisions.”

Advances in this technology continue to improve seamless functionality. Leading the race is Waymo, a subsidiary of Alphabet (Google’s parent company). Starting in 2015 with the world’s first fully autonomous ride on a public road, Waymo is now planning to begin vehicle assembly in Detroit, retrofitting the Jaguar I-PACE and Chrysler Pacifica to become fully functional level 4 autonomous vehicles (fully automated in controlled driving conditions; level 5 would be in fully autonomous in all conditions), with no human driver. So far, testing has occurred in more than six states and 25 cities. In late 2018, the California DMV granted a permit for Waymo to operate fully driverless cars during both daytime and nighttime hours for in-city areas as well as on highways.

For our industry, the same technological advancements that make autonomous vehicles possible will also allow great progress for all transportation companies. In the near future, an entire fleet of vehicles will be able to communicate and share information about weather, traffic, and optimal scheduling. In the interim, smart technology continues to become more and more standardized. In fact, that technology is already making its way into our vehicles:

• Forward-Collision Warning: Visual, audible, or haptic warning that alerts the driver of a potential collision.

• Adaptive Cruise Control: This system uses lasers, radar, cameras, or a combination of these to keep a constant distance between your vehicle and the car ahead, automatically maintaining a safe following distance. If highway traffic slows, some systems will bring the car to a complete stop and automatically come back to speed when traffic gets going again.

• Automatic Emergency Braking: Brakes are automatically applied to prevent a collision or reduce collision severity when the system detects one is imminent with a vehicle directly in front. AEB is effective for both city and highway driving. It is expected to be a standard equipment feature for all vehicles by 2022.

• Rear Cross-Traffic Warning: Visual, audible, or haptic notification of hazard or object that is potentially moving into close range of the rear of the vehicle.

• Rear Automatic Emergency Braking: Brakes are automatically applied to avoid collision behind the vehicle. This may be triggered by the rear cross-traffic system or other sensors on the vehicle.

• Connected Mobile Apps: These apps can track any number of ­metrics from standard maintenance records to engine and transmission diagnostics.

• Pedestrian Detection: Some vehicles now come with sensors that can detect not only pedestrians, but cyclists as well. An audible or haptic warning is issued, and automatic emergency braking is triggered if necessary.

• Blind Spot Warning: A visual and/or audible notification warning the driver of a vehicle in their blind spot. 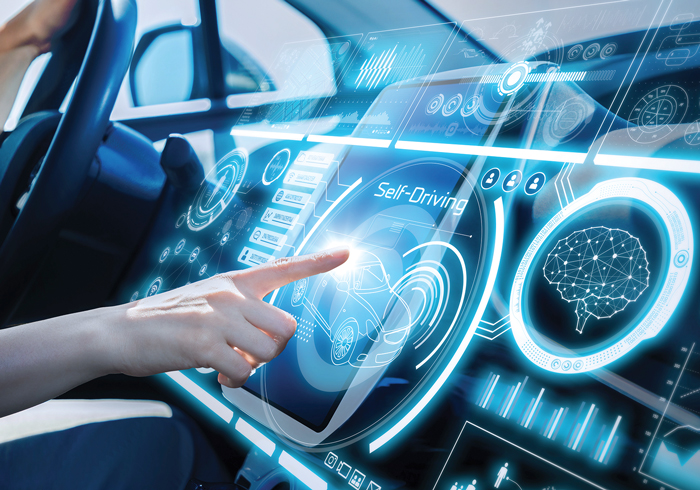 Tires
Tires might not be as newsworthy as self-driving cars, but the future of tire technology might save you the money and hassle of replacement. GM and Michelin have announced an airless, puncture-proof tire system for passenger cars. Moving to an airless model may result in a more durable product, reducing the materials, energy, and emissions associated with the manufacture of unnecessary spares. Testing is expected to begin sometime this year with airless tires arriving in production cars within the next five years.

Wearables
Wearable technology continues to be developed at record speeds and new innovations are being released almost daily. Since our first technology watch article earlier this year, many new devices have come to market.

• Worker Performance Tracker: Researchers at Dartmouth are fitting workers with a wearable fitness tracker that not only monitors sleep, stress, and calorie consumption, but also tracks physical activity, location, phone usage, and exposure to ambient light. Initial data collected from 750 workers from a high-tech company shows that high performers tend to use their phones less often, have better sleep habits, and exercise more frequently than their less productive counterparts.
• Bose Frames: Known for their superior sound and noise-cancelling technology, Bose has created smart eyewear that offers both at an affordable price. Currently selling for just under $200, Bose Frames are designed to be worn daily for an exceptional audio experience.

Wearables aren’t just for fitness anymore: Mercedes-Benz has teamed up with Garmin to create a smartwatch. The wearable tracks your heart rate and stress levels while driving and changes your vehicle’s environment to promote calm by changing the air conditioning, lighting, and music. It will also be able to calculate routes that will minimize agitation. While the technology is being used to reduce instances of road rage, imagine the possibilities that might come when tracking your vitals, from reporting potential emergencies to preventing drunk driving accidents. Or imagine a wearable that could customize the passenger experience based on preferences indicated in their own smartwatch.

Resources: deloitte.com, washingtonpost.com, wired.com, wearabletechnologies.com, citylab.com, pcmag.com, enterpriseiotinsights.com, en.wikipedia.org, forbes.com, techcrunch.com.    [CD0819] Chris Hotham is director of operations for the LMC Group. She can be reached at chris@lmc.group. Kato Murry is the operations Associate for the LMC Group. He can be reached at kato@lmc.group.