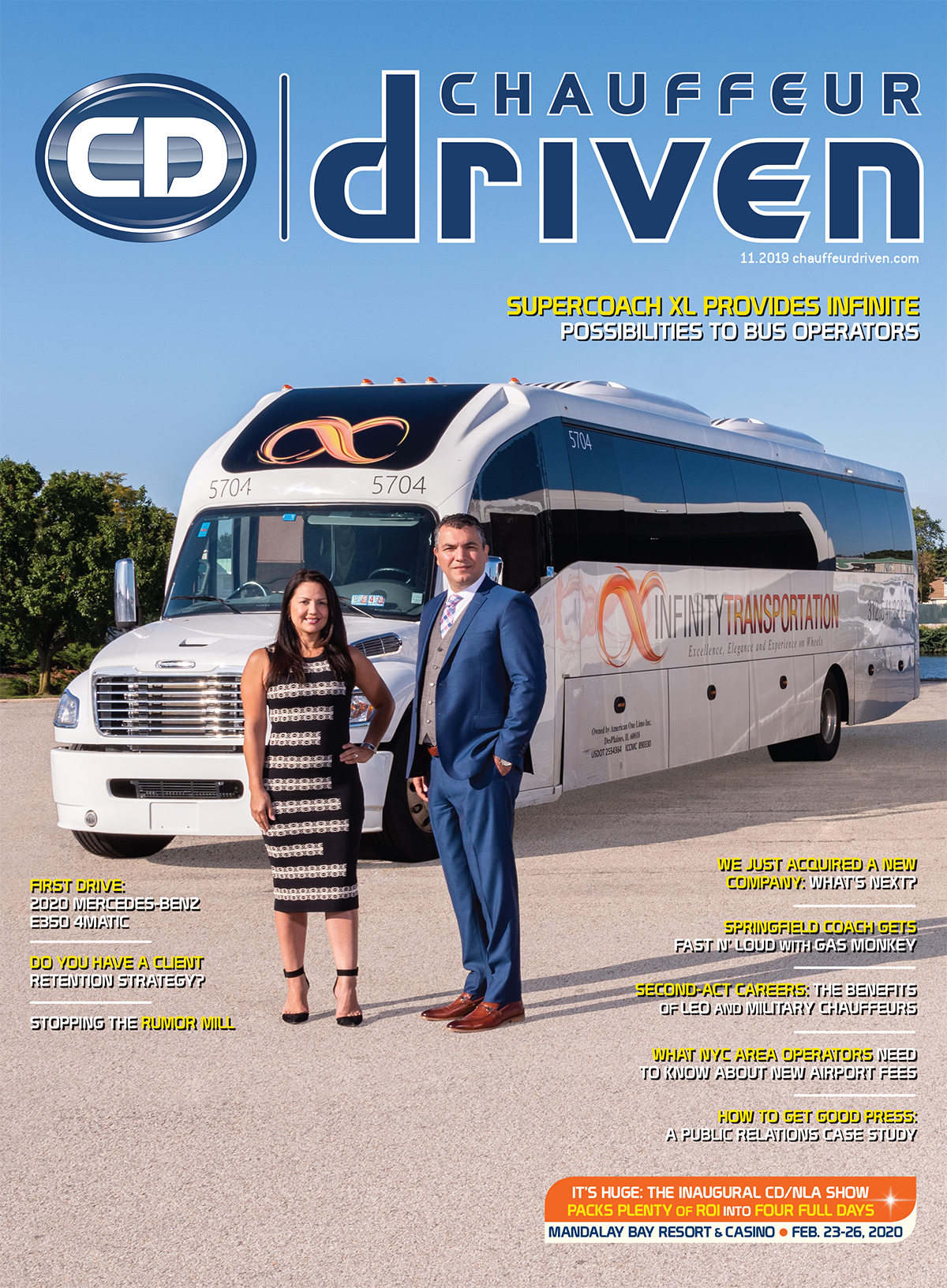 Cover Art: Infinity Transportation Co-owners/Managing Members Karla Dogan and Api Dogan with their Supercoach XL bus at their Chicago-area headquarters. Photography by Andrew Schneps of Back Bay Photography. Infinity Transportation Co-owner/Managing Member Api Dogan has always had an eye toward the future. Seeing the trend move toward group and bus work in the luxury ground transportation industry, Dogan transitioned his Chicago-area company away from sedans, limousines, and SUVs into an all-bus fleet.

“I come from a limousine background, but when the limo business started declining, we started switching to buses. Customers began requesting bigger vehicles instead of having multiple limousines show up,” says Dogan. 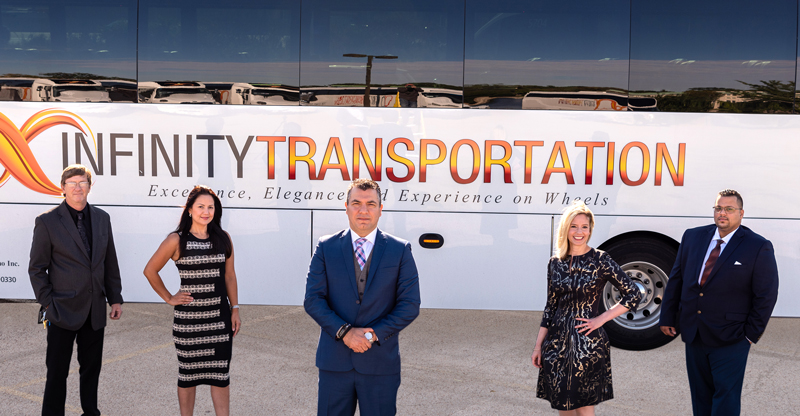 L to R: Director of Fleet Maintenance Scott Fitzgerald, Owner/Managing Member Karla Dogan, Owner/Managing Member Api Dogan, Director of Operations Liz Arnold, and Director of Sales and Marketing Isaac De Jesus To meet the demand of this new expanding market, Dogan began adding mini- and midsize buses to his fleet. Ultimately, though, for an operator drawn into the business by his love of luxury cars, he felt there was something lacking. Dogan wanted to provide his clients with the comfort and amenities of a limousine, but with the capacity of a larger vehicle.

“Initially, I found that many of the buses available to me were basic builds with cloth seats and rubber floors; they didn’t have the luxury that we, as limousine operators, were looking for,” he says. “So I started shopping around, and putting leather seats into our 40-passenger buses. But we had customers looking for even larger sizes.”

"I come from a limousine background, but when the limo business started declining, we started switching to buses. Customers began requesting bigger vehicles ..." – Api Dogan, Owner/Managing Member of Infinity Transportation 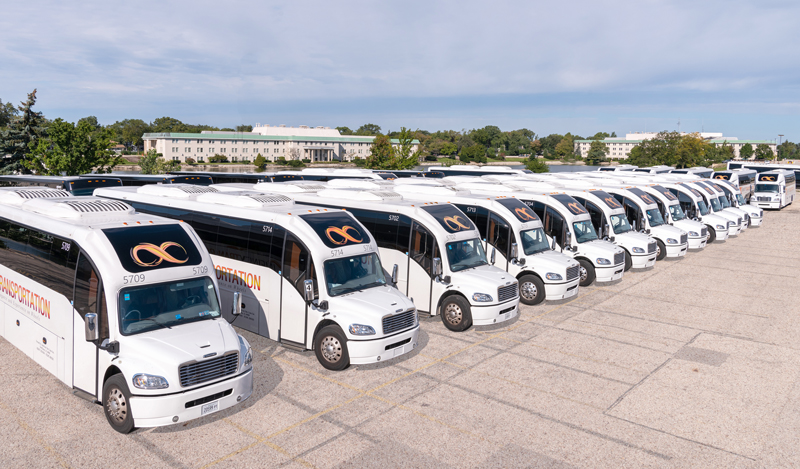 Infinity Transportation’s fleet of Supercoach XL buses Upon entering the motorcoach market, Dogan invested in 10 low-mileage, late-model vehicles, which saw steady use and bookings. Soon, though, Dogan had a brainstorm for a bus with the capacity of a coach but a size and price point more suited for point-to-point local moves.

Again, Dogan turned to Bakare and EBB to collaborate on his concept. While motorcoaches provided the seat capacity, luggage space, and restroom that clients desired, Infinity was seeking a new type of vehicle that would excite their customers and thereby increase profits. In May 2018, the two met at an Illinois Limousine & Bus Association meeting to develop a plan for a vehicle that could offer the space of a motorcoach. 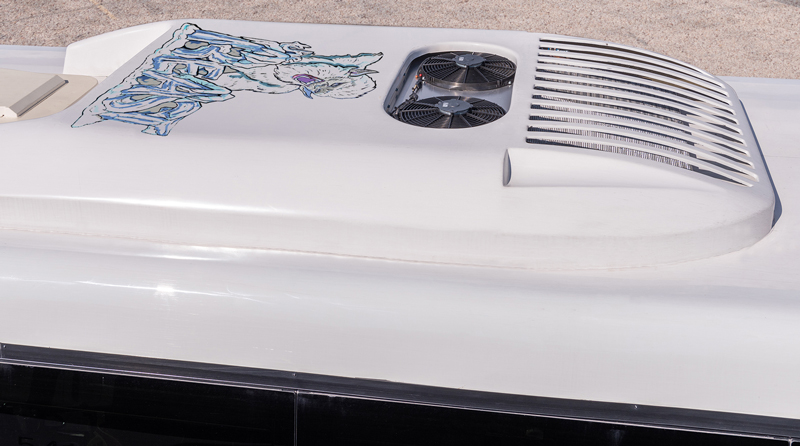 Premier Product’s The Beast air conditioning unit on the Supercoach XL “We took a look at the Supercoach, and I said, ‘Why can’t we get rid of the co-pilot seat, and put the door in the front like a school bus to add more seats?’ At first, David thought it wasn’t possible because Freightliner wouldn’t allow him to move the fuel tank under the co-pilot seat. We then went to Freightliner, and they said ‘Why not?’ They removed that second fuel tank, replacing it with a single 100-gallon tank on the driver’s side, which allowed us to move the door. With David’s years of experience, he was able to re-design the Supercoach to fit 57 passengers.”

Thus, the Supercoach XL was born.

Specifically designed with luxury ground transportation operators in mind, the Supercoach XL is built on a Freightliner chassis, and includes a 300 HP Cummins engine, seating for up to 57 passengers (54 with restroom), underbelly luggage bays, reclining captain’s chairs with USB ports and three-point seat belts, power outlets, laminate floors, and more. In addition, the vehicle offers an 10 mph gas efficiency, which appeals to operators watching the needle. 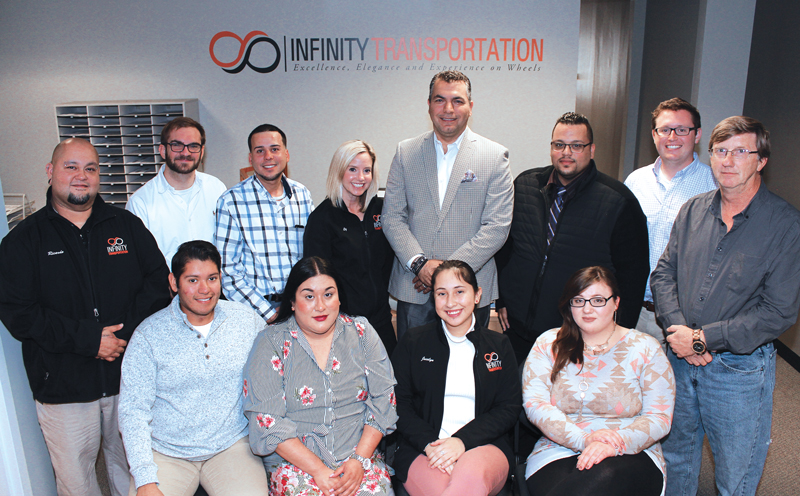 “Imagine running a coach with dozens of passengers on a hot Chicago summer day,” says Dogan. “If you don’t have a properly working air conditioner, it would be like an oven in there. The bus might be perfect in many respects, but if the AC doesn’t deliver, you simply can’t have it on the road. We were the first to put The Beast in our coaches—but it wasn’t really a gamble. The positive experience we’ve had over the past four years with Premier Products gave us comfort. Their systems are bulletproof and their service is second to none. I’ve had systems from every AC manufacturer in my buses and motorcoaches over the years, and there is nothing on the market that blows as cold or hard as The Beast.”

The Beast’s performance has exceeded expectations, leading Dogan to insist on Premier AC units being included in all of Infinity’s buses. Dogan says having uniform AC systems in the fleet will eliminate any maintenance and service issues. However, Dogan does admit that The Beast AC did result in a recent complaint from a client.

“We got a call saying the air conditioning in the bus was too cold,” he laughs.

Infinty Transportation chauffeurs (L to R): Karl Clermount, Chris Corsaut, Dinah Shaw, and Trevor Bayliss Since Infinity received their first delivery of 25 Supercoach XL units in August 2019, the vehicle has been an instant favorite with their clients, particularly among bookings for local moves. While customers enjoy the Supercoach XL’s slick look and expanded capacity, they are impressed by the luxury and value it offers.

“If you are managing a group of 1,000 people who want to go to dinner and the restaurant is five or so blocks away, you’d need 20 motorcoaches, which would be very expensive. But with this Supercoach, you can get the trip at roughly half the price. Because it’s a local job, they don’t need a bathroom or luggage space. It saves them money.”

Co-owner/Managing Member Karla Dogan handles the sales side of the organization. She sees the Supercoach XL as advantageous in every way to both clients and operators.

"We took a look at the Supercoach, and I said, ‘Why can’t we get rid of the co-pilot seat, and put the door in the front like a school bus to add more seats?’ ... With David’s years of experience, he was able to re-design the Supercoach to fit 54 passengers." – Api Dogan

“Since adding the Supercoach XL to our fleet, we have become more attractive to clients looking for a luxury bus for group moves,” she says. “It really lets us compete in a new way. Plus, many clients we work with care about sustainability. They want to limit their carbon footprint, and that’s possible with the increased fuel efficiency of this bus.” 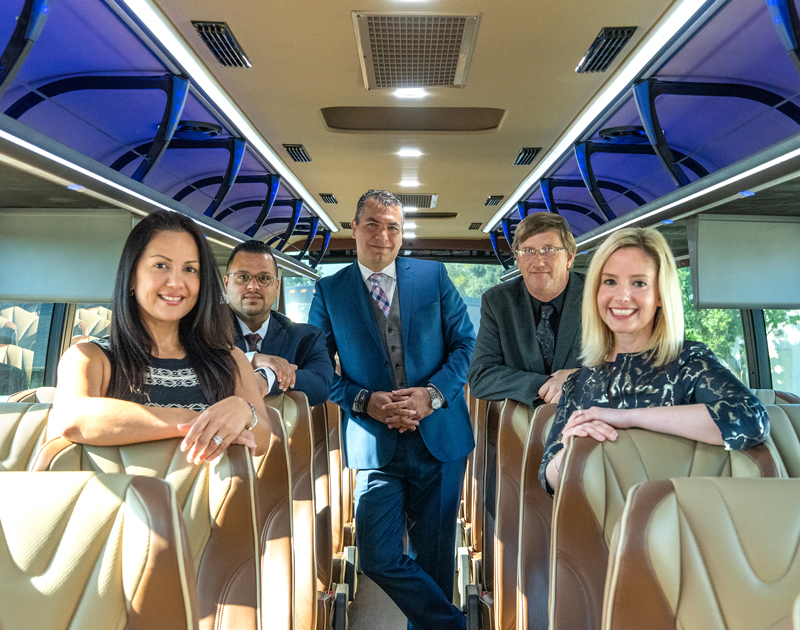 L to R: Karla Dogan, Isaac De Jesus, Api Dogan, Scott Fitzgerald, and Liz Arnold Karla also points out that the fair price point of the Supercoach XL and its comparatively low maintenance costs have doubled Infinity’s bottom line, and they are now able to provide health care to their employees and offer higher wages to attract top-tier chauffeurs and CDL drivers.

At October’s Chauffeur Driven Show in Boston, Dogan again met with Bakare to order another 10 Supercoach XLs. He is thankful to have developed a partnership with a builder who believed in his vision.

“David is the only one who took on this challenge. When I told him about my idea for this coach, he did all of the R&D, and built one on his own. He spent all the time, the energy, and the money to test one and see if it would work. He believed in me as an operator. Who else is going to spend millions of dollars on a prototype without an order?”

“David comes from a limo background,” says Karla. “He understands the needs of the operator. He takes into account what his customers want, and implements their feedback.”    [CD1119]