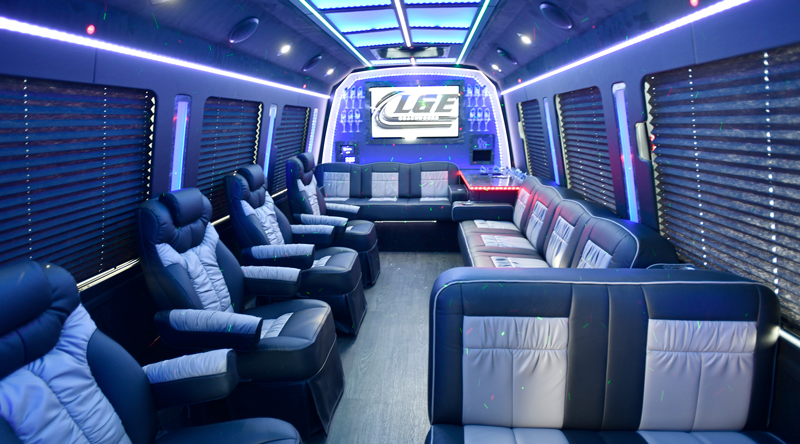 A Luxury Coach interior with captain’s chairs and perimeter seating Fifteen years ago, LGE Coachworks made its industry debut at a trade show in Atlantic City, N.J., initially cutting its teeth on, and earning a reputation for, producing limobuses with a distinctive flair that appealed primarily to retail and night-on-the-town passengers. Oh, how things have changed.

As chauffeured transportation has pivoted to focus more heavily on corporate and executive transportation, LGE Owner and President David Sacco has continued to expand the lineup for a well-balanced portfolio—attractive to operators and private buyers alike—by tailoring vehicles and refining its options to suit a variety of applications and niches. After all, it has to live up to its name: Luxury Ground Entertainment.

LGE starts each build—whether it’s a corporate shuttle, a luxury coach with captain’s chairs and perimeter seating, a specialized medical vehicle, or a totally new interior concept—on the numerous platforms popular for the industry: the Ford Transit, Mercedes-Benz Sprinter, heavy-duty chassis from Ford (E450 and F550) and Freightliner (M2), and the Ford F600 and F650 (new in production in 2020). Having a wide assortment of possibilities, seating capacities, and configurations available allows customers to find the right price point that will work for their businesses. While the manufacturer stocks its most popular executive models for those operators in need of a last-minute replacement, many of its customers opt for a custom-designed vehicle with the LGE team. 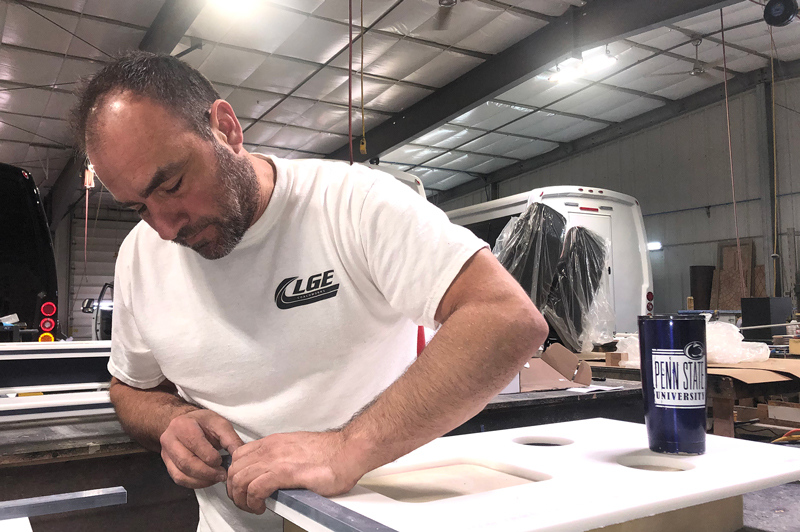 Owner and President David Sacco works on a custom two-tier bar top made with Dupont Corian “We never want to cut corners to save dollars, and that has paid off by creating returning clientele who trust the LGE team to keep their vehicles up to date,” he says. “It’s about understanding their market and finding solutions for what they need. But it’s also about ensuring that these vehicles meet local or federal DOT regulations regardless of where they are operating them.” He adds that he uses New York and New Jersey DOT guidelines, which are often stricter than federal standards, as a benchmark. Further, when a customer is looking to sell their well-loved LGE vehicle, being compliant in all 50 states helps with resale.

Operators’ tastes and the purpose of his products may have changed over the past 15 years, but Sacco says that his commitment to cultivating business relationships with his customers has remained steadfast. Now among the oldest custom builders dedicated to the industry, he adds that his goal is to always prioritize integrity in every aspect of his business, which includes using the latest technology to help design, assemble, and operate their products. 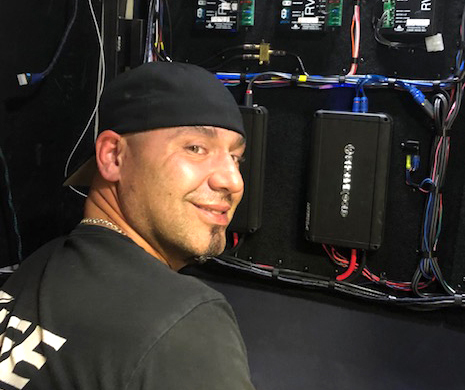 Audio and Video Specialist Jason Hammer works on the main control board of an F550 Limo Bus. He recently won numerous awards for his sound systems at the 2019 Mobile Electronics Competition Association World Finals “Even though we have removed some of the flashier interior options that we’ve used in the past, we’ve stayed true to our mission of providing a vehicle that could be used for a funeral, a wedding, a bachelor party, or even corporate executives,” says Alexa Sacco, LGE’s director of sales and Sacco’s wife. For example, LGE has muted its interior lighting for a softer, classic appeal while offering universally requested options such as upgraded seating, cutting-edge sound equipment, and quality electronics that the traveling public wants. At the most recent CD/NLA Show in Boston, LGE displayed a bus with a modified skirt design to distinguish it from other builders.

“What’s it like working with LGE? It’s like planning a vacation with my best friends: We discuss the things we want to do, things we might do, things that we just shouldn’t do ... and we get excited about the details,” says Tracy Salinger of Unique Limousine in Harrisburg, Pa. “I feel like I have a partner, not just a vendor. It’s productive, it’s easy, and it’s intuitive. They want me to be absolutely thrilled with the build, and I can’t wait to see it!”

LGE offers the Ford E450 chassis in lengths from 23’ to 29’ Shunning the notion that creating vehicles for an evolving market has to be plain or boring, LGE continuously aims to pack as much technology and innovation as possible into every limobus and shuttle so that they are functional, versatile, aesthetically desirable, and above all, safe. Because practically everything in the vehicle is produced in-house, Sacco says that they can control the quality for a consistent and reliable product. Anything that needs to be cut is done so with computer precision, not by hand, and is sourced locally whenever possible. Sacco also challenges his team of 20 craftsmen to share fresh ideas and suggest refinements that make LGE products even better.

“We have a great team who makes this happen,” says Alexa about the production process. “All of our employees bring something to the table that completes the LGE look, design, and feel. David obviously has a huge hand in how things are done and how it flows, but at the end of the day, those guys are the ones getting it done and done well.” 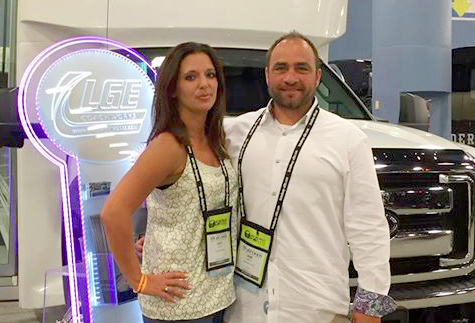 Director of Sales Alexa Sacco and President David Sacco have been attending shows together since 2005 LGE’s roster of private customers requesting custom vehicles has continued to grow, which has yielded some pretty spectacular builds. Several years ago, LGE created and retrofit a completely custom F550 bus for Bowflex founder Bruce Cazenave. More recently, the team built two buses for New England Patriots tight end Rob Gronkowski for his Gronk Nation Youth Foundation. The buses were decked to the nines with satellite TV to watch those live games on the go as well as all the Gronk memorabilia one could fit in a bus.

LGE is located in the bucolic town of North East, Pa., nestled along the shore of Lake Erie and in the northernmost point in the Keystone State near the New York border. Its location, while seemingly off the beaten path, is actually advantageous: It’s situated near I-90 (which runs from Boston to Seattle), and is within driving distance of Cleveland, Pittsburgh, Rochester, N.Y., and Toronto. Although the vast majority of its customers do come to the facility to help design or take delivery of their new fleet addition, Sacco says that he regularly ships to customers around the world. Service and warranty claims can be handled through LGE’s network of trusted service locations. Beyond the OEM’s warranty, LGE covers their upfitted interiors and components for two years/unlimited miles—although he’s been known to be generous with the “two-year” limit.

"What’s it like working with LGE? ... I feel like I have a partner, not just a vendor." – Tracy Salinger of Unique Limousine

“Word of mouth is the best advertising we could ask for. Not only are our customers satisfied with their vehicle, they are telling their associates and clients about us,” says Alexa.

All companies have competition, so like our cooperative industry that relies frequently on local affiliates, Sacco says he and his team work hard to earn the trust and business of industry operators as well as the mutual respect of fellow builders in the space.

The largest vehicle in its lineup, this 45’ ADA-­compliant Freightliner executive shuttle seats 40 and has under-floor storage “What sets us apart? This was a question that we struggled with, not because we have a hard time defining why we are different, but because we don’t need to brag about ourselves or find faults in other designers,” says Alexa. “Healthy competition is what keeps the market fair to buyers, and each reputable builder brings something unique and important to the industry. If we can’t give you what you need, we won’t act like we can. Instead, we will give you the name and number of a builder who can.”

Of course, nothing is quite as satisfying as being able to turn a happy customer into a raving fan, like they did with Karl Guenther of Statement Limousine in Sheffield Village, Ohio: “We could not be more pleased with our new vehicle,” he writes. “From our first visit, to David and Alexa accommodating the few tweaks we requested, to the great attention to detail and customer service that was provided, we feel that the entire LGE team went far above the norm in the industry. We look forward to a long business relationship with them.”    [CD1219]