Cover Story: Grech Motors and Mercedes-Benz Bring The 10X Movement To Our Industry 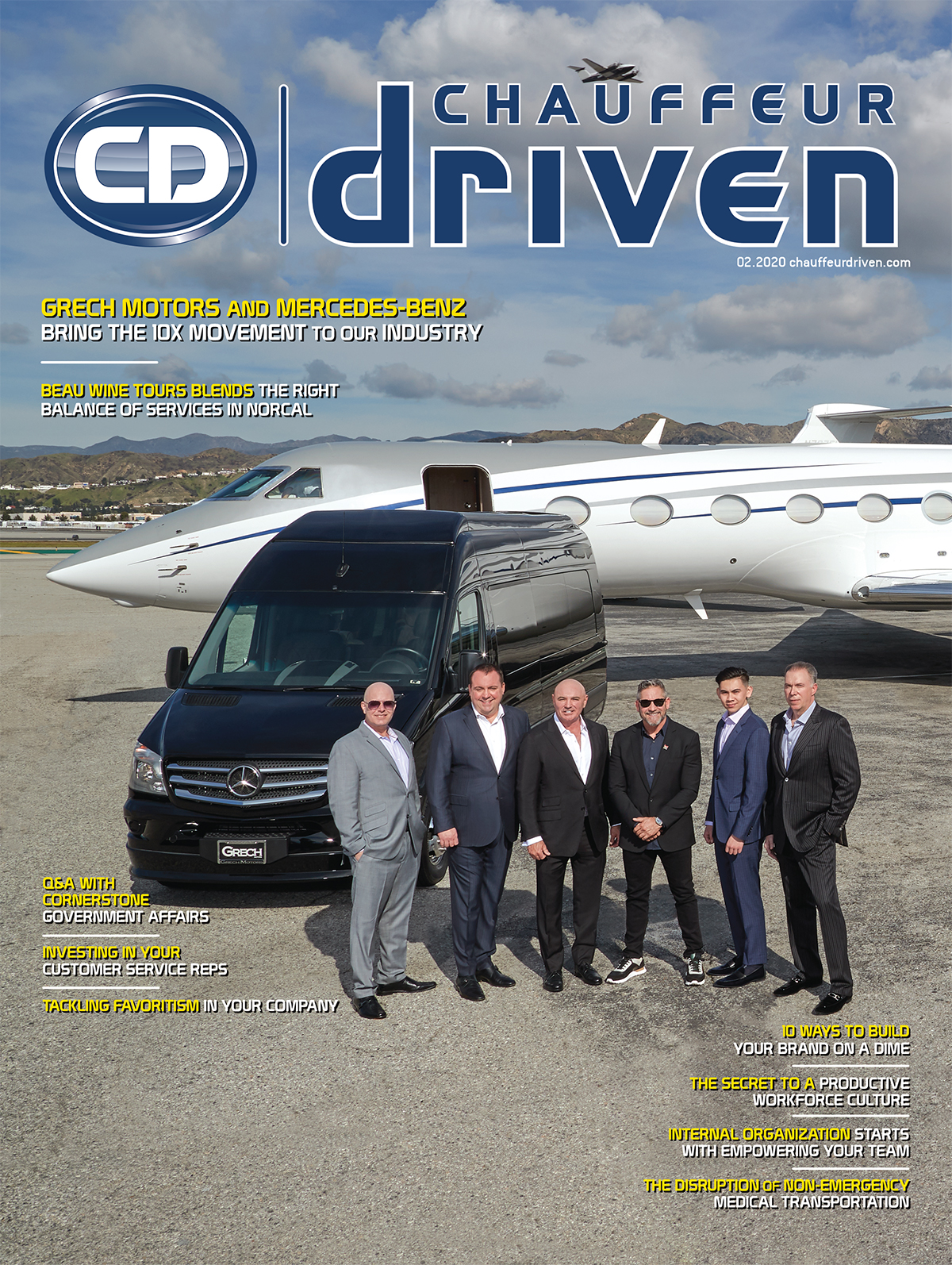 Cover Art: L to R: CD Publisher Chris Weiss, Grech Motors Vice President of Sales and Marketing AJ Thurber, Grech Motors Founder and CEO Ed Grech, Keynote Speaker Grant Cardone, Brandon Alpert, and Chauffeur Driven and Premier Products CEO Eric Alpert at Jet Aviation in Burbank, Calif. Photography by Lyle Okihara Photography. When it comes to supporting the luxury ground transportation industry, there are few companies that have continually stepped up to the level of Grech Motors. Whether it’s backing associations, sponsoring events, or ensuring that their clients have a reliable and safe vehicle, Founder Ed Grech and his team continually put forth the time, effort, and money to keep the industry strong and moving forward.

So, when, in 2019, Chauffeur Driven and the National Limousine Association (NLA) announced a partnership that included launching a new trade show in Las Vegas, it was without hesitation that Grech Motors was there to offer their exclusive support.

“We are firm believers in giving back to those who support us and support our company,” says Grech Vice President of Sales and Marketing AJ Thurber. “The NLA Board of Directors is made up of our some of our best clients and greatest advocates. This is our way to give back.”

"When we started doing business with Grech Motors, those vehicles made my company take off, and we created a whole new market geared for the luxury, high-end premium client base. I decided early on to be exclusive to Grech for all of our cutaway buses and Sprinter vans." – NLA President Gary Buffo of Pure Luxury Transportation

One of the ways that Grech is stepping up is through their co-sponsorship, alongside Mercedes-Benz Corporate Sales, of the keynote for this month’s first-ever CD/NLA Show at Mandalay Bay Resort and Casino. For an event this momentous, it was clear to all involved that the adage “go big or go home” was in full effect. With the support of Grech and CD’s new partners in the NLA, Chauffeur Driven and Premier Products CEO Eric Alpert reached out to entrepreneur and bestselling author Grant Cardone to bring his sales and personal growth strategies directly to the luxury ground transportation industry.

New York Times best-selling author of seven books, international social media influencer, operator of a $1.2B real estate portfolio, and highly sought-after coach and speaker, Cardone is globally recognized as the #1 sales training expert. At his third annual 10X Growth Conference—inspired by the methods put forth in his 2011 bestseller The 10X Rule—attracted more than 35,000 entrepreneurs from around the world. 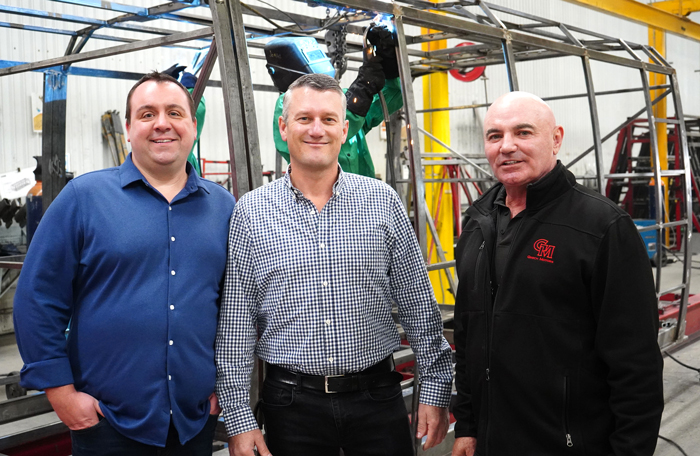 L to R: Grech Motors Vice President of Sales and Marketing AJ Thurber, Gary Buffo, and Ed Grech “My 19-year-old son Brandon has been following and learning from Grant Cardone since he was 17, and always suggested him as a potential keynote speaker for our shows,” says Alpert. “Last year, Brandon and I went to both the 10X Growth Conference and 10X Boot Camp in Miami, and we were blown away by his content and energy. When Brandon shared with me that Grant was holding his 2020 Growth Conference at Mandalay Bay the same week as the CD/NLA Show, we knew that this was our best opportunity to bring him to our industry. I reached out to Ed Grech for his support and as always he was there for our industry.”

To attract Cardone to the event, Alpert and Grech knew they needed to get creative and extend an over-the-top offer that transcended a typical speaking fee. Grech and Alpert proposed a one-of-a-kind Mercedes-Benz Sprinter for Cardone, courtesy of the teams at Grech Motors and Mercedes-Benz. ­Cardone jumped at the offer and a deal was quickly put into place for him to share his expertise with show attendees. The vehicle will be unveiled to Cardone in Las Vegas at the 10X Growth Conference at the Mandalay Bay and will be on display at the CD/NLA Show.

NLA President Gary Buffo of Pure Luxury Transportation is enthusiastic about the upcoming keynote, as well as the message and takeaway it will offer operators of all sizes and stages of business.

“I have to admit, I didn’t know much about Grant, but like Eric, my son was also a big fan. So, I did a little research. I truly think he can help every operator in the industry.” 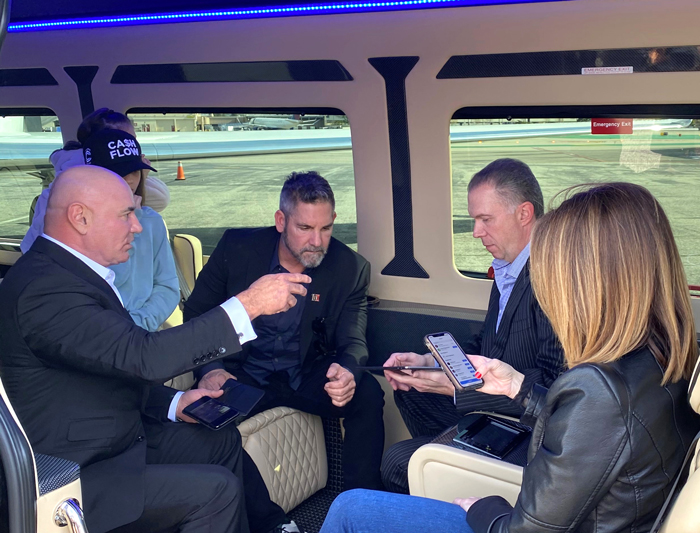 L to R: Ed Grech, Grant Cardone, Chauffeur Driven and Premier Products CEO Eric Alpert, and Elena Cardone discuss Sprinter options Working with the Grech Motors team is nothing new to Buffo. He and Ed Grech have a professional relationship that spans close to 30 years. In fact, Pure Luxury’s first foray into the bus market was with a vehicle built by Ed Grech.

“When we started doing business with Grech Motors, those vehicles made my company take off, and we created a whole new market geared for the luxury, high-end premium client base. I decided early on to be exclusive to Grech for all of our cutaway buses and Sprinter vans. It’s worked very well for us.”

Recently, after years of invites and cancelled trips, Buffo finally got to make good on an open invitation to visit Grech Motors’ manufacturing facility.

“Gary’s been one of our best clients to date,” says Thurber. “He’s been one of our strongest supporters and greatest advocates. But between his work with the NLA and his company, he’s never had the time to get to see our facility. He finally made the time, and saw the factory firsthand.”

The trip was something of a game-changer for the veteran operator. “I learned more about minicoaches during the five hours I was in the Grech factory than I’ve known collectively in the almost 30 years that I’ve been running them,” says Buffo.

With 61 Grech vehicles in Pure Luxury’s fleet, it’s clear that Buffo is no stranger to Grech products, but getting to observe the minicoaches up close on the assembly line and quality control was eye-opening.

“Seeing the stages of the process from the chassis until it’s a finished product was really interesting for me—getting to know what’s underneath, the way it’s built, and especially the way each bus is tested and certified, even down to the anchors on the seatbelt. Knowing that everything in a Grech bus is tested and certified helps me sleep at night.”

“During my time working in the bus dealer world, I was able to tour virtually every minicoach factory and production facility,” says Thurber. “While they’ve certainly changed over the years, this plant is of the highest quality in respect to how we’ve created a streamlined, automated, and efficient production process.” 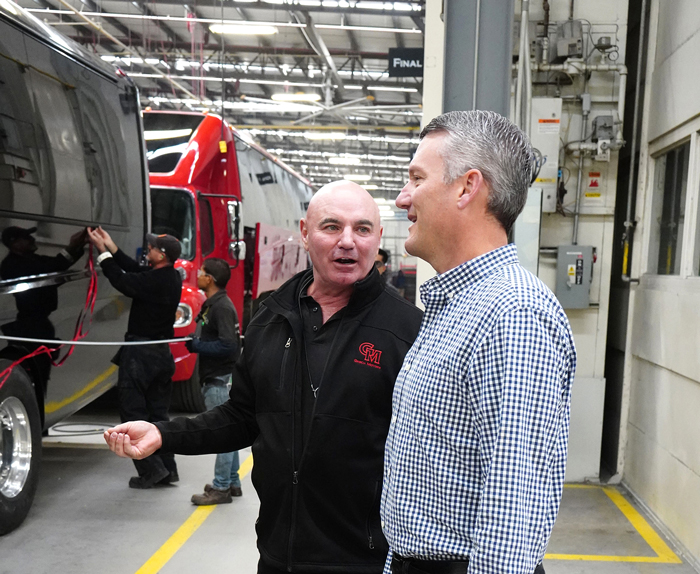 “We work hard so that our engineering, testing, and documentation is done properly. For example, we manufacture our own seats and we ensure that all seats are certified and pull tested. As far as safety, Grech Motors will be the first minicoach builder to go exclusive with three-point shoulder belts in every vehicle manufactured in 2020 and beyond.”

One of the vehicles that Buffo saw on the production line was the Mercedes-Benz Sprinter built for Cardone. The NLA president was one of the few people who have gotten a peek at the top-of-the-line executive van before its unveiling this month.

“We told Grant that Grech was going to produce the best Sprinter that’s ever been built,” says Buffo. “I was in awe going through the plant.”

In anticipation of the debut of the Sprinter, Grech, Thurber, CD Publisher Chris Weiss, Limo University Founder Bill Faeth, and Eric and Brandon Alpert met with Cardone for a photoshoot at Jet Aviation in Burbank, Calif., adjacent to the Hollywood Burbank Airport. Grech brought along a sample Sprinter to give Cardone something of a preview of what he could expect. The excitement was palpable among the group, and even the roar of the engine of his private jet couldn’t drown out Cardone’s enthusiasm toward the vehicle and keynote.

“Grant’s got great energy. It’s going to be, hands down, the best keynote our industry has ever seen,” says Thurber.

Be sure to check out Chauffeur Driven’s April issue for more about Grant Cardone’s custom Sprinter and the CD/NLA Show.    [CD0220]