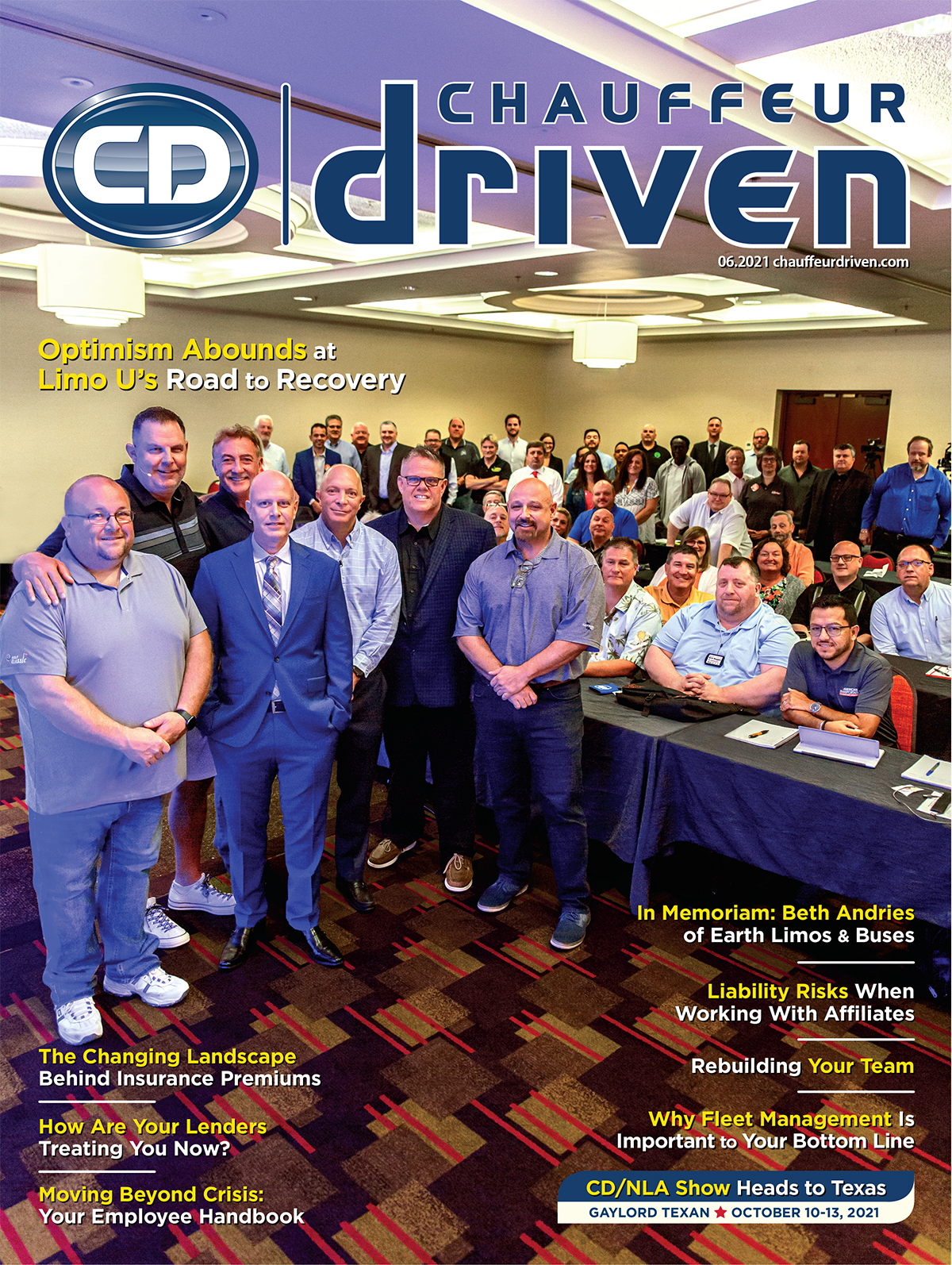 Chauffeured transportation is roaring back to life, and boy, are we ready for it! With more and more people traveling, as well as a rapid escalation of corporate travel, meetings, and large-scale events planned for this summer and fall, now is the perfect time for operators to refocus their efforts and prepare to seize the business that is on the cusp of exploding.

Getting owners ready and in optimal condition for this ramp up was the mission of Limo University’s recent Road to Recovery, a two-day boot camp held May 17-18 at the Drury Hotel in Nashville and spearheaded by founder and industry education guru Bill Faeth. The sold-out event was attended by nearly 70 operators of all sizes from across the country (as well as CD President Chris Weiss)—and the energy couldn’t have been more awesome.

Staffing and attracting talent, reassessing business plans, practical cash management, rebuilding emergency funds, and customer reactivation and procurement were just a few of the smoking-hot topics discussed over the two days. One among many of Faeth’s goals was toning and reshaping those customer-service muscles that may have weakened during the pandemic but remain at the foundation of our industry.

“Because a lot of operators haven’t serviced their customers for six, nine, even 14 months, operators are going to have to solve customers’ problems again. Even if they did have deep relationships, clients don’t know how safe they are, so that encompasses the customer service side of the business,” said Faeth. “We all fall in love with our vehicles, but it’s really about customer service.” 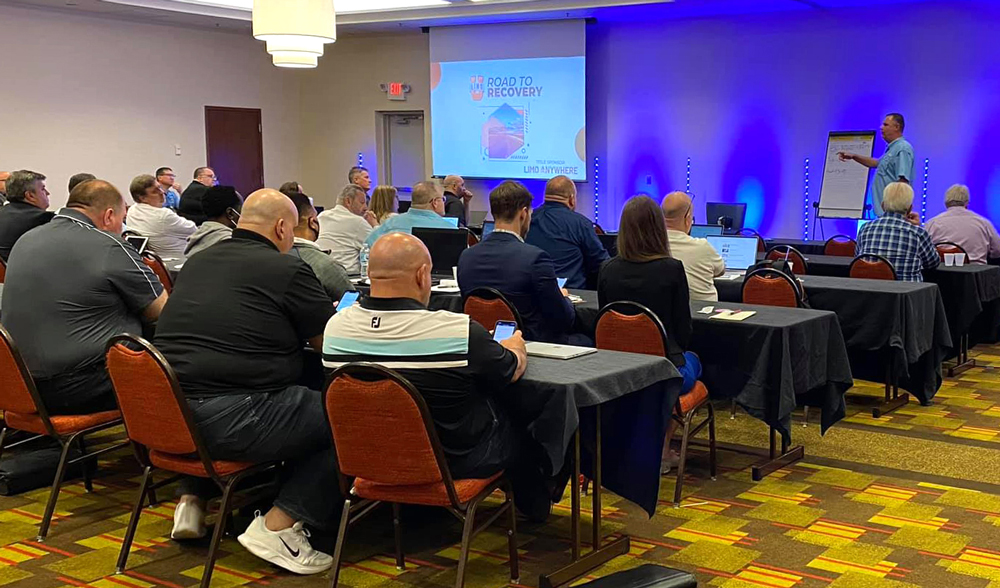 Limo University Founder Bill Faeth leads a session at his Road to Recovery education and networking event Hiring was also on the docket—plenty of industries, including our own, are fighting to fill key positions in an employee-driven market. Faeth says that operators have to “sell” their company to prospective employees rather than just posting something on Craigslist and expecting applicant to come to them. The topic even inspired an impromptu revision of help-wanted ads that, in real time, netted several operators quality candidates responding to their openings.

Faeth was joined by speakers NLA President Robert Alexander of RMA Worldwide and CEO Robyn Bass of Maple Ridge Events, who each shared their no-nonsense advice and inspiration for the work required ahead. The time allotted for each session was quickly surpassed as the conversation and questions flowed.

“I think that Robert has a tremendous amount of integrity and he puts the betterment of the industry ahead of his own company. And because of that mindset, he is an important resource for other operators, specifically in how he operates, runs, and manages his company as a leader. I wanted his leadership skills to be on display for the people who attended,” said Faeth. 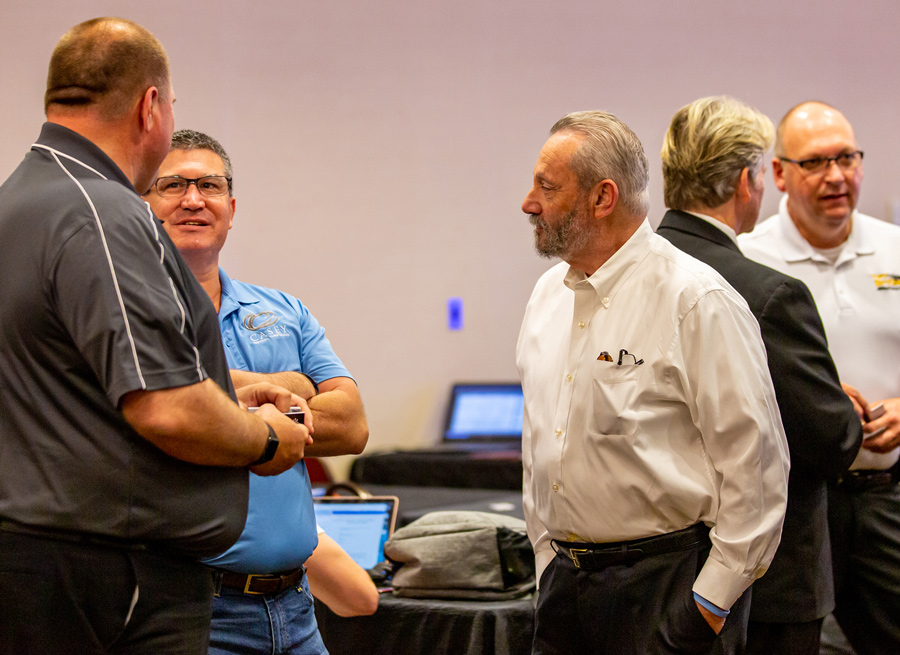 The return of in-person networking had attendees in good spirits

“Robert was supposed to have a one-hour session, but we were at 90 minutes and the questions and content were so great that I didn’t stop him,” Faeth continued. “It was so critical for small operators to understand that, at the core, they can’t be the one washing vehicles, dispatching, managing all of the operations, and still expect to grow. You have to figure out how to delegate and prioritize. That message is why I invited Robert to speak, and he delivered five times over.”

Robyn Bass—whose resume includes building an event management company, serving as the former president of the Tennessee Chapter of Meeting Planners International (she continues as an instructor with MPI’s Leadership Academy), and a slew of professional awards—gave pointers on working with DMCs and the expectations that event managers have for their business partners. She primed attendees for the return of meetings and events, which she says is gearing up to be a phenomenal fourth quarter of 2021 and beyond. 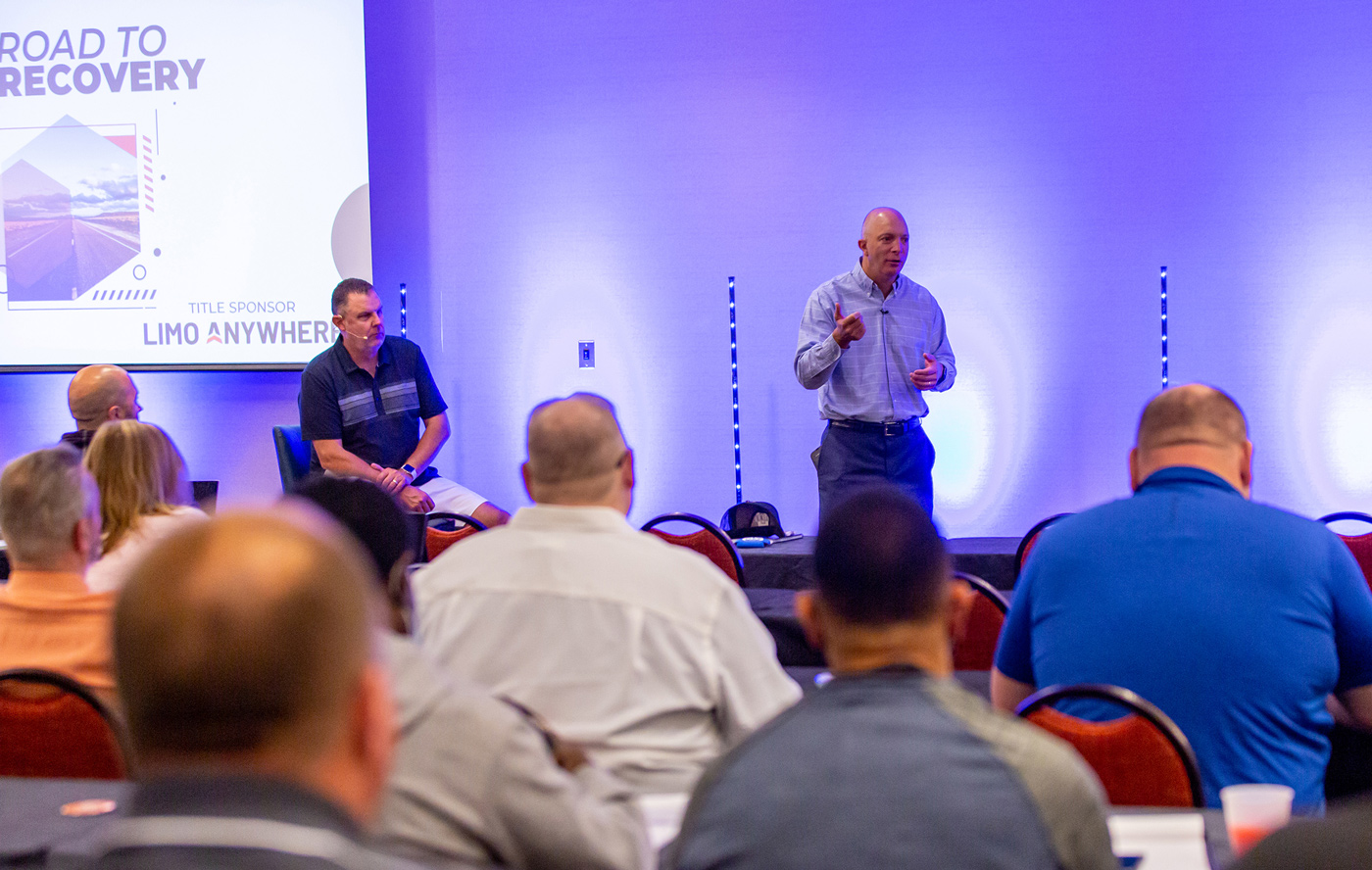 “Robyn said, ‘Don’t wait for us to call you; you need to be calling us now because we are busy with contract proposals and handling site visits. The ball’s moving, and this industry won’t see it for two or three months, but it’s coming and most operators wait until it’s too late.’ This was just one of many messages she shared that were absolute gems for this industry,” said Faeth.

Chauffeured transportation was certainly wounded, fatally in some cases, but event planning is perhaps one of the few industries that may have been hit even harder. Bass shared how her $7M company’s last event was in early 2020—with zero earnings in the entire calendar year. Like the many operators who regrouped and pursued other revenue streams, Bass also pivoted by starting a new business and setting herself up for a solid 2021 once meetings returned.

While optimism was certainly contagious (and very much needed) among attendees, especially after such a difficult year, Faeth was careful and cautious to rein in overzealous operators with some pragmatic guidance. 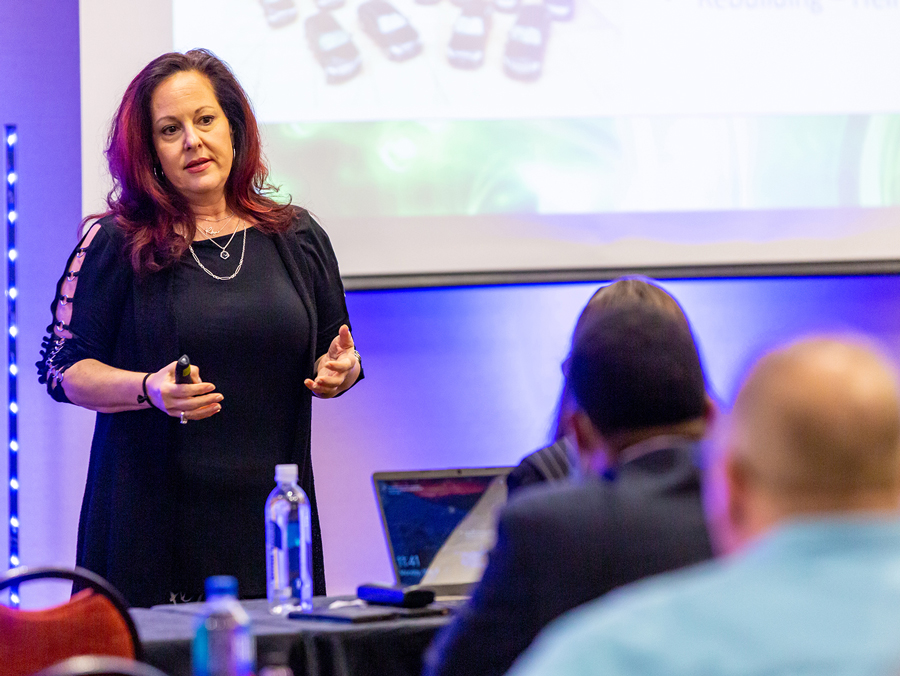 Maple Ridge Events CEO Robyn Bass spoke at the boot camp “Prudent management of cash is just as important moving ahead. Let’s make some money, bank some money, and rebuild our companies,” he said, warning operators from going on unnecessary spending sprees—personally and professionally—while their war chests are depleted.

Seeing industry friends for the first time in person in more than a year as well as swapping battle stories and lessons learned were equally as essential as the education.

“It was great to see colleagues back together and sharing stories of how 2020 impacted them, but watching people come together and share ideas and brainstorm topics of how they are rebuilding was inspiring. My biggest takeaway was surrounding finances, you need to be more in touch with them now than ever and make calculated decisions when buying or selling assets, as well as hiring. Almost every move has to be strategic,” said Ken Carter of Aadvanced Limousines and NLA Board member. 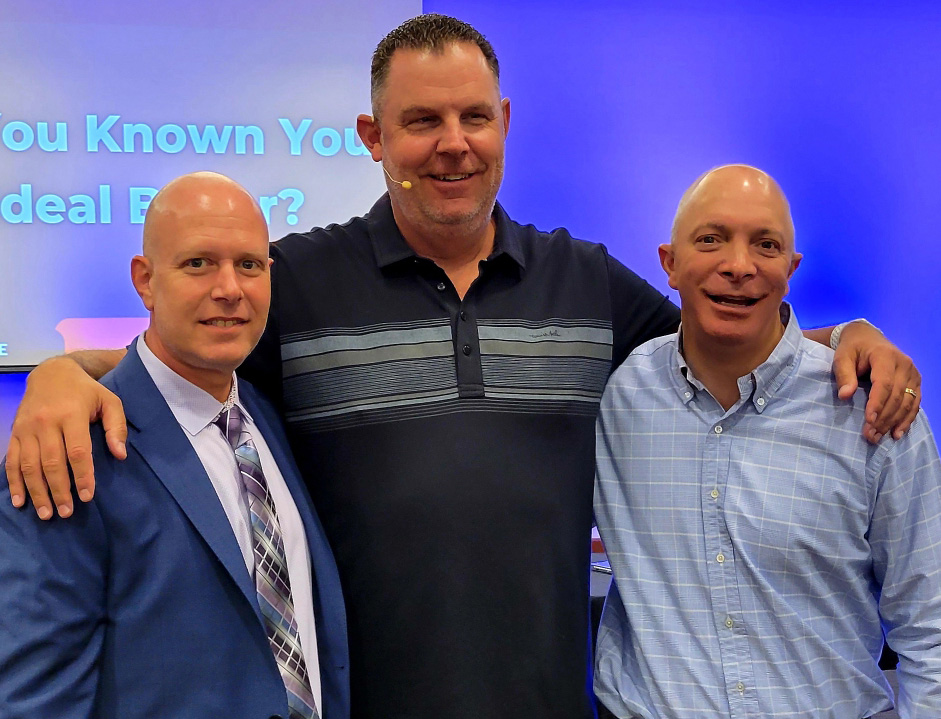 L to R: CD President Chris Weiss, Limo University Founder Bill Faeth, and Robert Alexander Faeth says that he was also surprised when Limo Anywhere stepped up and offered to sponsor the event just days before the kick-off—even though he wasn’t actively seeking sponsors. The industry technology provider ended up being a Title Sponsor for the boot camp.

Thanks to the success of the event, Faeth is contributing a portion of the boot camp’s proceeds to the NLA. Faeth and Alexander frequently collaborate on NLA livestreams, while Faeth heads the association’s No Operator Left Behind initiative. Alexander says these funds will help the association—which has been extremely active on behalf of operators throughout the entire pandemic—to continue to support members and the industry through new projects and advocacy.

“I’m so happy that I made the decision to attend the Road to Recovery. It was great to see some fellow operators and I left with a few tools to restart my business,” said Douglas Schwartz of Executive Ground Transportation and member of the NLA Board.   [CD0621]