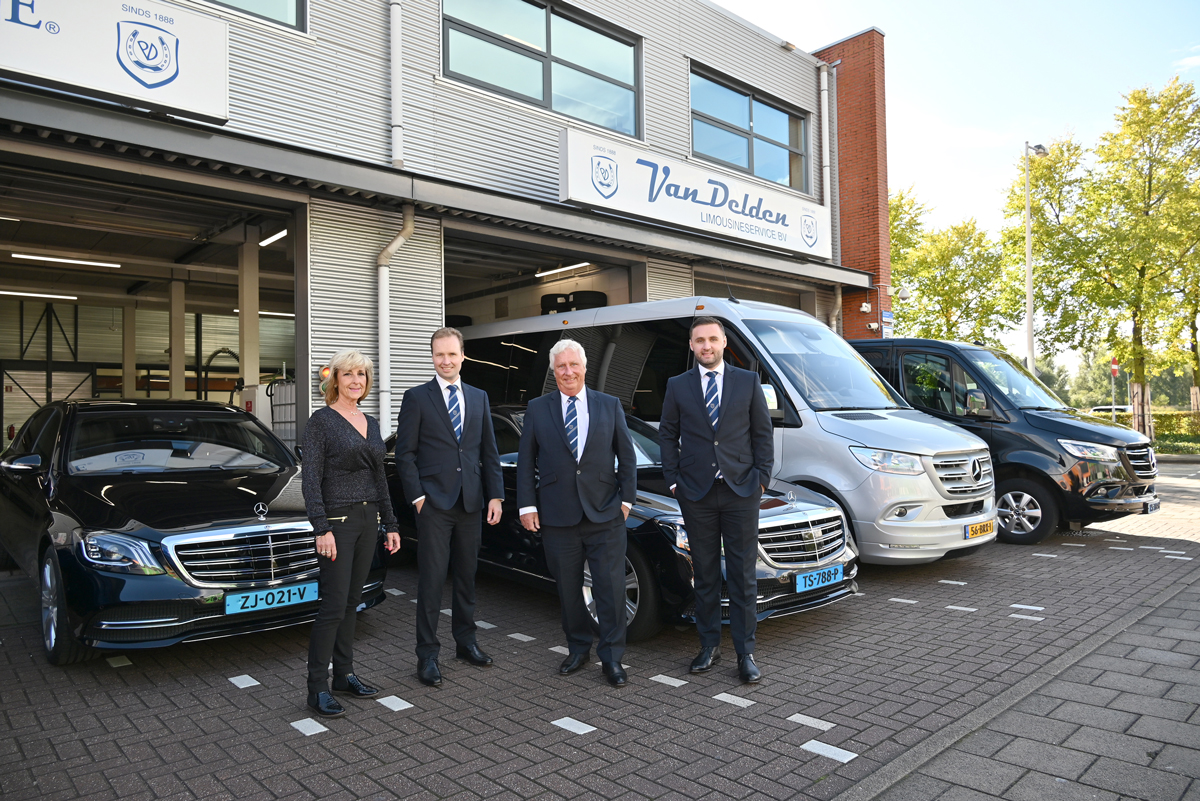 With a company that’s been around for more than 130 years, it goes without saying that each generation is going to face its own set of challenges. For Van Delden Limousine Service CEO/Co-owner Ralph van Delden, he never imagined that a pandemic might have him question the future of his family-run company, an operation that has spanned five generations.

“In 2019, the sky was the limit. Business was running very well,” he says. “After the economic crisis that ended in 2013, our business had increased a lot. There were many changes: our fleet was completely updated, and we had good staff. Then COVID came, and suddenly there was no business.”

“Everything exploded without warning. At the end of March and April the famous Amsterdam tulips are all out, so we were extremely busy with tourists who want to visit our small country to see the beautiful flowers. Then it seemed that people wanted to make up for two years of not traveling. There were also a lot of events, including pharmaceutical events, that we organized the transportation for. Amsterdam was chosen as the host city for a large event. April through June, together with the tourism, things were incredible.”

“From the moment I was a young boy, I always liked cars and people. Every free moment I had was spent joining my dad or grandfather at the office.” – Ralph van Delden, CEO/Co-owner Van Delden Limousine Service

For the fifth-generation van Delden, it’s been rewarding steering the company into the future. Founded in 1888 by Herman van Delden, the company thrived as a horse and carriage operation, and continued that way for close to 70 years. It wasn’t until the post-war 1950s that automobiles entered the equation, with the first Cadillacs being imported into the Netherlands.

“Motors came into play after World War II. After the war, we had to sell many horses and carriages due to the recession. In the ’50s, the first Cadillacs were imported into the country from the US,” he says. 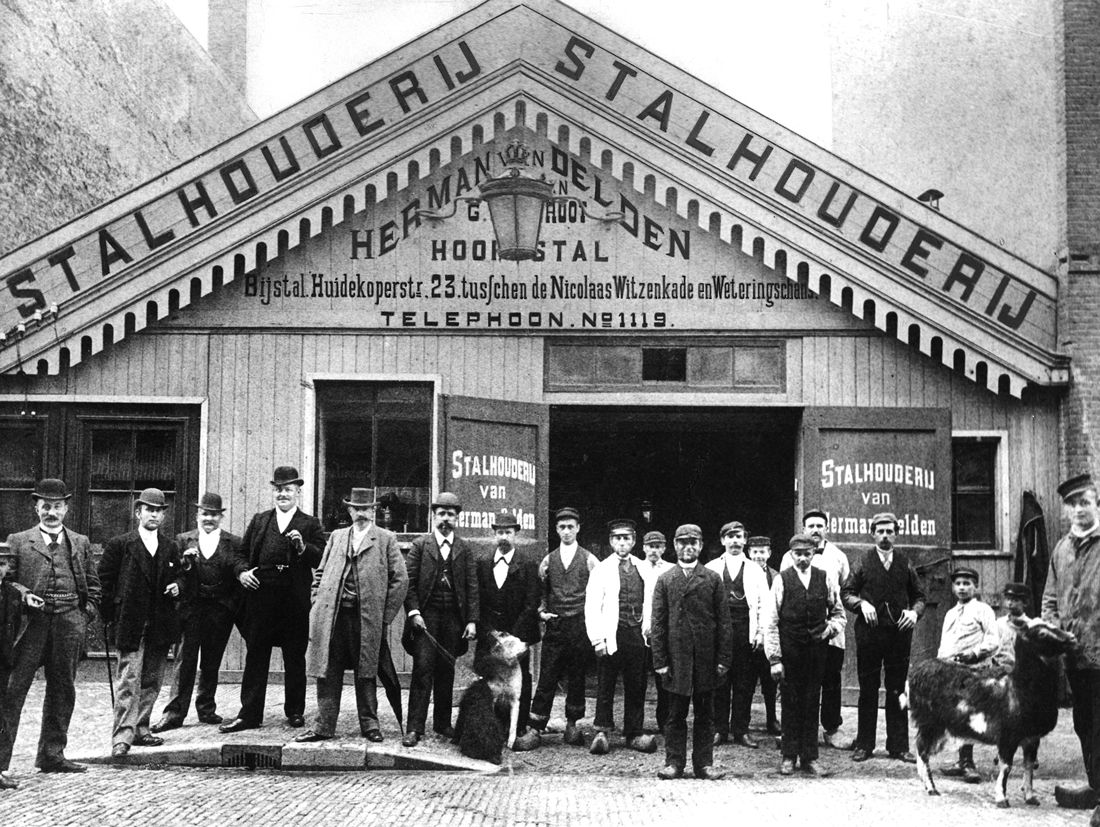 The company’s first home with founder Herman van Delden (3rd from left). The contours of the building are nowadays still visible. “Business at the time was diverse: there were a lot of weddings, but also funeral business. It was normal for people to be driven in a horse and carriage. In the ’50s, we were chosen to be the first private company to transport a member of the royal family: it was the birthday of Princess Beatrix when she turned 18,” says van Delden.

“From the moment I was a young boy, I always liked cars and people. Every free moment I had was spent joining my dad or grandfather at the office. I’d help wash the cars; I played in the cars. When I was a little older, I could drive back and forth in the garage, which was fun. When I was 18 and had my driver’s license, in between my studies, I would make a little bit of money on the side working as a chauffeur. It was great to be in the business.”

In 2005, van Delden joined the back-office staff at the family company, first as a dispatcher. Soon, however, he was joining his father, Peter, on sales calls and attending networking events.

“I found this side of the business very interesting. I learned a lot,” he says. 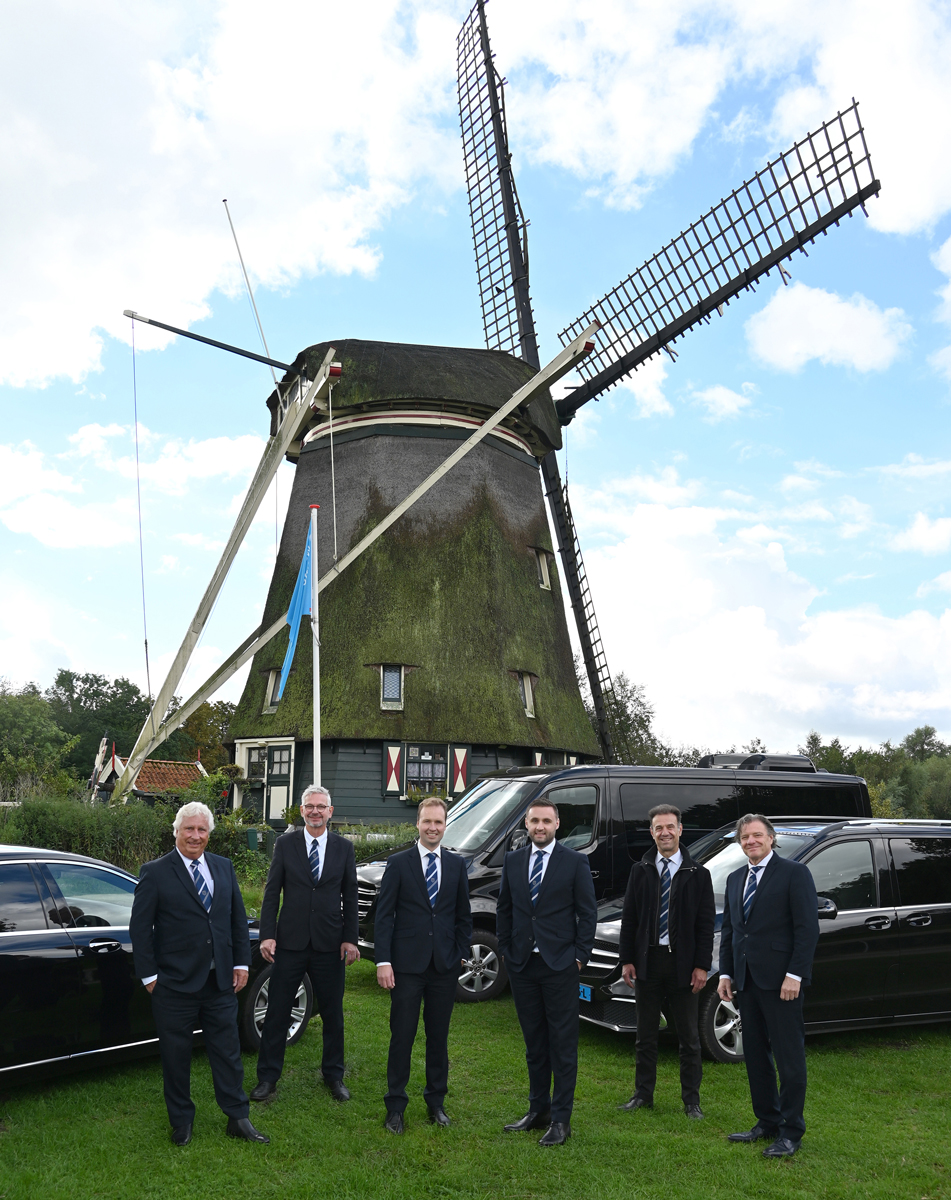 L to R: Family patriarch Peter van Delden, Chauffeur Pim, CEO/Co-owner Ralph van Delden, Co-owner Robert van Delden, and Chauffeurs Luiz and Alaor at one of the most famous windmills in Amsterdam at the Amstel River Ultimately, Peter van Delden stepped down from the company in 2013, allowing Ralph to take the reins of the company. In 2017, Ralph’s brother Robert joined the firm as a partner. However, Peter, along with his sister Caroline, still maintain roles with the company.

“The fourth generation is very hard working; they still have feelings and connections with the company but let me and my brother run it the way we choose,” says van Delden. “Although my father retired, he always helps us when there is a shortage of chauffeurs or when it’s extra busy. He never complains. He helps whenever possible, and I have respect for that. He doesn’t mind driving a car or helping out.”

His aunt is also integral in the company’s operations: “My aunt Caroline has handled the administrative side since 1990. During the crazy year we are in, she’s worked incredibly hard to assist wherever she could. Never complains about working long hours or on the weekend.”

Van Delden not only values the work ethic of the previous generation, but he also cites his father’s creative problem-solving ability. Case in point was a time when a big ’90s star came to the Netherlands.

“My father had a request of driving a celebrity in the ’90s. They said, ‘we need transportation, what is possible?’ And my dad told them that everything is possible! The star’s people said they wanted a stretch limo, special cigars, a certain brand of whiskey ... and a swimming pool in the car. The whiskey and cigars certainly weren’t a problem, but what do we do for a swimming pool? My dad bought an inflatable pool and filled it with a little water and a rubber duck.”

A swimming pool in a vehicle certainly required some innovative thinking, but the sequence of events that began in early 2020 tested the faith and tenacity of almost every business owner, including van Delden. One can imagine the burden of keeping an enduring family legacy alive during such difficult times.

“You start going through a lot of emotions—what is happening, how long will this take? It was going into emergency mode. Then after two or three months, you start making hard decisions and questioning how you will survive this. For me personally, it was very tough,” admits van Delden. 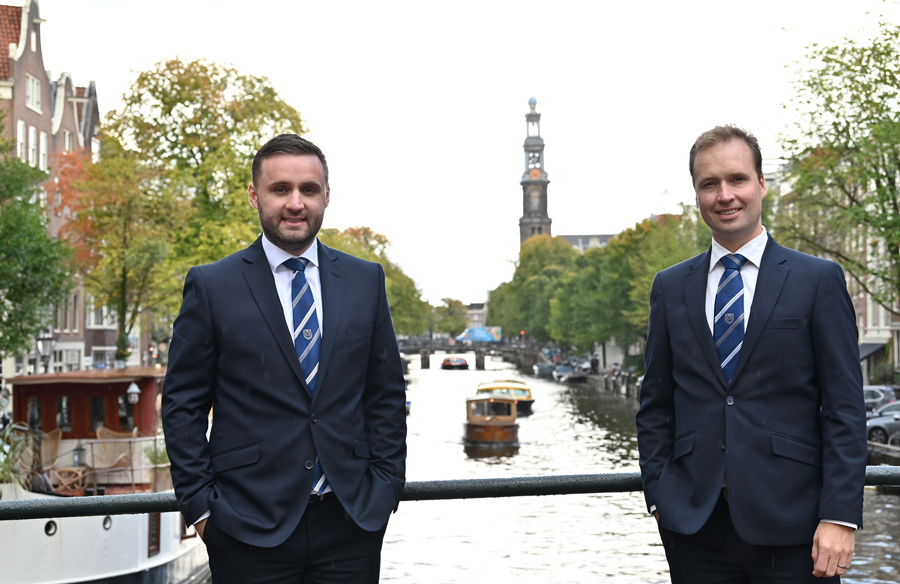 Robert (left) and Ralph on one of the famous canals in Amsterdam with Westertoren church in the background Fortunately, Van Delden Limousine was able to maintain their complete fleet as well as 95 percent of their staff by outsourcing their team to their government’s health care department.

“The government agency that provided COVID tests and injections needed workers. So, we made an agreement to outsource our employees to that department. Luckily, everyone was willing to help. For me personally, it was very positive that they were willing to do work they weren’t exactly hired for. It was something very nice,” he says.

The fluctuating COVID numbers in Europe prevented the country from “reopening” throughout 2021. Van Delden says that business would be on the cusp of returning, and then COVID rates would spike causing another work stoppage.

“With the fear that COVID may return, and the war in Europe, things were a little scary. We saw a lot of moments where it looked as if business was returning but then it went down. Then, of course, the war in Ukraine started. The US is one of our largest markets for clients; we heard that people were afraid that Russia and the Ukraine were too close and they’d stay away. Although, I think the American border is closer to Russia than we are,” he laughs.

COVID and war aside, operating in the Netherlands is not without its own set of unique challenges. While van Delden doesn’t consider Uber to be of consequence, there is legislation in place that make it easy for small, independent operators to tread on Van Delden Limousine Service’s business.

“At this moment, the regulations in Holland don’t separate between regular taxis and limousines. There’s only one license. That means companies are able to offer both services at the same time. For instance, people book a black car for say 100 Euros to take you to the hotel. You’ll be in a sedan with a driver in a suit. Then later, you’ll request a taxi to the airport and the same car arrives—now with a taxi sign that was hidden in the car—and you’ll pay 60 Euros. It makes competition difficult. It’s very easy to get a limousine license, and the IOs—who are single-car operators—can offer very cheap rates.”

Another challenge unique to Amsterdam is the weight limits placed on vehicles, which puts the company in a bit of a catch-22. Like many cities worldwide, the government has made plans to eliminate internal combustion vehicles in favor of electric vehicles. In addition to concerns about the charging infrastructure, the increased weight of electric vehicles puts them in a new vehicle classification.

And with 60 percent of the Van Delden Limousine’s business coming from US markets, the company exclusively hires chauffeurs who are well versed in English.

“We started in 2017 with Teslas,” says van Delden. “There are many OEMs that offer good mileage, so you can use it all day. The challenge is minivans ... the charge is limited and the weight is an issue. The batteries are so heavy that the weight exceeds regulations, and you can’t carry as many passengers as you’d like. Here, 3500 kilograms is the limit for a car. Over that, it becomes a truck or a bus and it requires a different license.”

And like operators around the world, finding chauffeurs has been difficult for van Delden. “We have our own fleet of 30 cars. But in the morning, for example, a lot of intercontinental flights are arriving. Sometimes we need 40 cars simultaneously. So, we had a network of independent chauffeurs who backed us up and during the peaks when we needed more staff. We have always worked with extra chauffeurs who were extra flexible during those periods. Unfortunately, many of those chauffeurs left the business during COVID.”

Similarly, those dreaded supply chain issues are an ongoing concern. Van Delden says that he had a car out of commission for four months while they were waiting for an otherwise inexpensive exhaust sensor to arrive.

That said, van Delden says that things have been “exceptional” for the company. While the April-October tourism season is over, they are currently seeing a great deal of corporate and business travelers—and their fleet of chauffeurs is ready for the task. 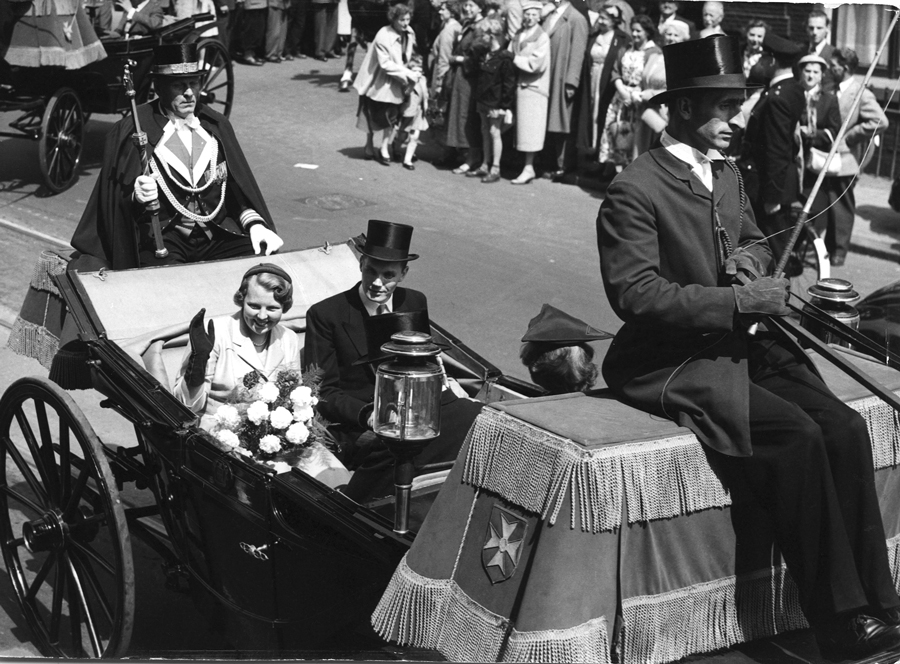 Piet van Delden (3rd generation) driving Princess Beatrix on her 18th birthday. Van Delden was the first company chosen to drive a member of the royal family. “At the moment, we have 42 employees, including chauffeurs. You always look for the best of the best, that’s the goal. We have two different types of clients: tourism and business travelers—and each needs a different type of chauffeur. We have several who are interested in doing tours and share knowledge about the city. Then we have roadshow clients who use the car as an office and want a chauffeur to keep his mouth shut.”

And with 60 percent of the Van Delden Limousine’s business coming from US markets, the company exclusively hires chauffeurs who are well versed in English.

“100 percent of our chauffeurs speak English. It is a requirement,” says van Delden. You can bet that having 134 years of family experience is invaluable for a young operator like van Delden. But he is also eager to gain and share knowledge of his peers.

“I make it a point to attend two trade shows a year. I notice first-timers seem to be concentrating on new business. But, what’s interesting and important for me at the shows is learning from operators. I learn so much from talking from colleagues. I suggest that all operators use the knowledge presented at the show,” he says.

When it comes to advice for those new to the luxury ground transportation industry, van Delden believes that operators need to adhere to a vision and maintain their values. For Van Delden Limousine Service, those values come down to a single word: loyalty.

“That’s the key word. We’re not perfect, but what we promise, we deliver. We have clients who have been with us for decades. Don’t overpromise yourself. Speak in actions, not words.”   [CD1222]