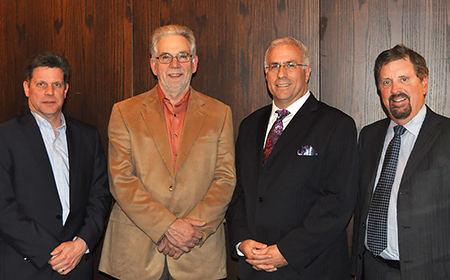 King of Prussia, Pa. — The Philadelphia Regional Limousine Association (PRLA) met on Monday, December 12, at Maggiano’s Little Italy for a joint general membership meeting and holiday dinner. The meeting was attended by over 30 members and friends, including CD Editor Rob Smentek.

After the attendees enjoyed a multi-course meal, PRLA President Steve Rhoads of Rhoads Limousine welcomed the members and discussed timely business regarding the association’s continued fight with the Philadelphia Parking Authority (PPA). 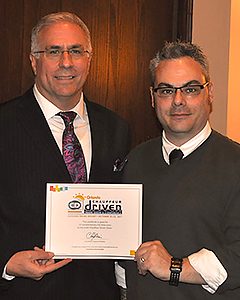 2017 CD Trade Show and Conference pass winner Anthony Onorata of Anthony Limousine (left) with CD Editor Rob Smentek Recently, the PPA raised their per vehicle rate a whopping 111 percent —from $405 to $856—with no announcement. In response, PRLA immediately hired an attorney who issued the city a restraining order city to put the increase on hold.

At the meeting, Rhoads shared that the efforts of the association had been heard by a Federal judge who will meet with representatives from the PPA and PRLA—including Rhoads, Mike Barreto of Flyte Tyme Worldwide, and Jordan Sanders of Hollowsands Luxury Limousines—to resolve the fee dispute and attempt to create a new set of regulations that will put the area luxury ground transportation industry on an even playing field with the TNCs. PRLA Director Anthony Onorata of Anthony’s Limousine encouraged members in attendance to brainstorm to come up with a “wish list” of changes to current PPA rules that could be introduced to the judge. Rhoads and Barreto expressed optimism that a compromise will be met with the city. The conference with the judge is scheduled for Friday, December 23.

The meeting concluded with a trio of raffles among the members. CD donated a pass for their 2017 Trade Show & Conference held October 22-25 in Orlando, which was won by Oronata. Other prizes included a kitchen appliance gift basket and a travel bag.