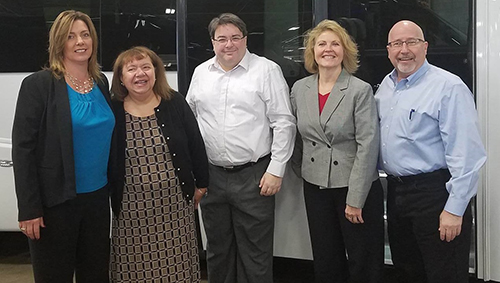 Des Plaines, Ill. — The Illinois Limousine Association (ILA) kicked off 2017 with its first open board meeting of the year on January 3, hosted at vendor member Midwest Transit Equipment’s headquarters and included a vehicle preview.

The meeting saw 35 members and nonmembers alike come together for the opportunity to discuss attendees’ various industry, operational, and TNC-related questions, as well as an overview of what the association is planning for the year to come.

“ILA’s first meeting of the year was a breath of fresh air!” said ILA President Tracy Raimer of Chicago Transportation Group. “The attendance was great, and the interaction and discussion from everyone was lively and informative. We spent a bit of time discussing what topics our membership would like to see for our upcoming annual meeting on May 10, and were able to create a decent list of ideas to begin working on.”

“I feel it was a great starting meeting for the year,” added ILA Vice President Brian Whitaker of Chicagoland Transportation Solutions, who was especially thrilled with the camaraderie exhibited by those in attendance. “The discussion was incredible: Ideas were flowing from many of the attendees. Members and non-members started throwing out questions, like where to get buses washed and who to use for phone answering service—right away, George Jacobs offered for them to bring their bus to Windy City, where it would cost less to wash than what they were paying now. And Chris Vecchio of Chi Town Party bus offered to talk with another member about answering services and even hinted that he had something in the works himself.”

ILA’s open board meeting at Midwest Transit Equipment hosted 35 members and nonmembers As the ILA has been embroiled in a fight with the city of Chicago to seek a more level playing field between the regulated transportation industry and TNCs, some of the conversation inevitably steered toward that—though it was unanimously appreciated that the focus was more on empowering operators than fighting with the likes of Uber and Lyft.

“One comment that was great to hear was from Anuj Patel of Ponterelli Companies that we were having great discussions and that the words “Uber” and “Lyft” were no longer the main topic of conversation,” Whitaker said.

The next open ILA board meeting will be February 1.