Faribault, Minn. — Bus and motorcoach dealer ABC Companies and has announced that they are celebrating 30 years of business with Belgian coachbuilder Van Hool. ABC is the exclusive distributor of the manufacturer’s vehicles in the United States.

Since the two family-owned companies joined forces in 1987, their shared vision has centered on developing and maintaining extraordinary relationships with their customers. With a unique premium European product offering, supported by ABC’s established distribution, sales, parts, and service network, the partners continue to distinguish the brand and demand for the Van Hool product in the American marketplace.

From the very beginning both families understood that listening to the customer and responding to their needs and demands would be crucial to success. Over three decades Van Hool has modified equipment models and subsequently introduced ongoing series of fully-Americanized versions that have steadily gained popularity, grown market and mindshare and increased customer loyalty year in and out.

“There are a number of key turning points in our history together,” said Roman Cornell, ABC chief commercial officer. “And it’s exciting to see where the breakthroughs occurred.” Most notable was the breakaway success of the Van Hool C2000 series introduced in 2000. Built exclusively from the top down for the North American market, within a year it not only became the most popular imported coach in the United States, it also outsold all the other imported coach models combined. “Customers loved this product because it was the direct result of listening to their input,” continues Roman. “While they know to expect premium quality and support from Van Hool and ABC, I believe what they really appreciate is the hands-on aspect of working with both of our companies.”

Roman Cornell, ABC Companies chief commercial officer Today, with over 10,000 Van Hool coaches on the road, and three generations of ABC and Van Hool family leadership, the brand dominates the highway coach private market segment. “Customers know that we are just as invested in surviving and succeeding as they are,” says Filip Van Hool, CEO of the eponymous firm. He believes that the family-oriented cultures at both ABC and Van Hool, makes it easy for customers to do business with their firms. Van Hool says that there are significant benefits that are simply not applicable when transacting with a larger corporate structure.

“Our priority is to give customers the confidence and the solutions they need to support their operations,” says Dane Cornell, president and CEO of ABC. And, he believes that ABC’s entrepreneurial business approach supports that objective. He also notes that few manufacturers can claim that they’ve had three generations actively run a successful business, a trait they share with many operators throughout North America.

Accessibility and access within both organizations often results in product modifications directly forged by customer needs and preferences. A few prime examples of customer collaboration include the introduction of the Van Hool TD925 double deck coach. This double deck coach delivered a high-capacity solution to Coach USA for the launch of its Megabus market expansion and has been the go-to solution for a number of Silicon Valley employee shuttle programs. There are now over 600 Van Hool double deck coaches currently in the U.S.

Similarly, the CX35 Van Hool model was introduced to answer operator calls for a smaller version of the popular CX45 foot coach with a reduced passenger capacity that would not sacrifice the “big coach” look, style, and feel. The new CX35 model has been another success with orders exceeding expectations and thanks to standardized design and manufacturing and numerous interchangeable parts with the 45’ version, operators can realize significant parts, as well as driver training savings when running both models in their fleets. 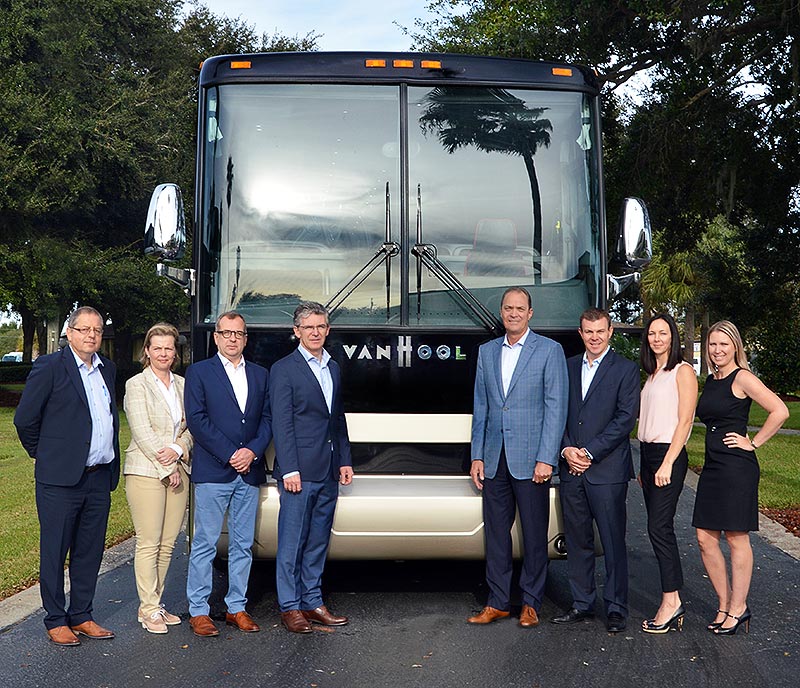 The Cornell and Van Hool families celebrate 30 years of business partnership The partners are committed to future-looking innovation and investments that contribute to greater control and efficiencies for their customers and their own business strategies. Plans to expand and strengthen their parts business supply chain will afford faster access to needed components for customers according to Roman. “We envision growing our supply chain and distribution network to tightly sync with operator requirements when and where support is needed all over North America.” He also references the innumerable technologies emerging each year that can truly impact operational efficiency. “ABC and Van Hool are focused on rapid technology adoption, and whenever possible being first to market with tech-driven solutions for our operators.”

“We’re proud and grateful to celebrate thirty years of partnership,” says Dane. “We look forward to continuing to serve our customers, our communities and our industry for decades to come.”

In other news, ABC recently made a generous donation to the the Museum of Bus Transportation in Hershey, Pa., who just completed their most successful Spring Fling, with over 500 attendees and 50 “visiting” coaches supplementing the museum’s 38 antique buses.

ABC Senior Vice President, Mike Laffan, presented John Oakman, the Museum’s Fleet Committee Chairman, with a fully refurbished 2004 Stewart Stevens Tug with an air compressor on it for use in moving and maintaining the Museum’s vehicles.

“This is a huge donation,” said Oakman. “We’re dealing with fragile antiques, and this tug lets us maneuver and service them safely, reducing the risk of damaging irreplaceable buses.”

Last year the Cornell family and ABC donated a restored 1956 Scenicruiser, and have committed to lend their famous 1921 White Motor Co. “Little Red” bus for display in the near future.

“The Cornell family and ABC are well known for their remarkable accomplishments and contributions in the bus business,” Oakman pointed out. “But the industry may not be aware that their achievements are matched by their generosity in preserving the equipment and history of our industry. The Cornell’s have donated buses, and restored coaches in their facilities, as well as given money and their considerable expertise to the Museum. The Museum and the coach industry are literally in their debt forever.”